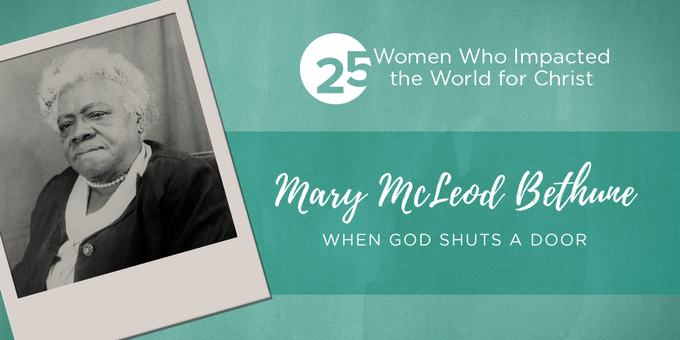 What do you do when a door shuts in your life? What if rather than a nice, gentle closing, it slams in your face? I'd like to think I would accept this as a sign of God's direction, but most likely I'd burst into tears and feel all kinds of sorry for myself. Perhaps that's why Mary McLeod Bethune is so inspirational to me. Her life story urges us to look at closed doors not as disappointment, but as God-given opportunities.

Mary Jane McLeod was born July 10, 1875, in Mayesville, South Carolina, to former slaves Samuel and Patsy McLeod. Even once they were free, her parents struggled to feed and clothe their fifteen children. Mary dreamed of a day when she could have things that white families took for granted, like books and glass windows. Her mother said, "Mary Jane has a rising soul. She will either go far or break her heart."

Mary's life changed when a local missionary woman offered to pay for her education, first to Scotia Seminary in Concord, North Carolina, and then to evangelist D.L. Moody's young Bible Institute in Chicago. She became the first African-American student to attend Moody Bible Institute, graduating in 1895.

A Heart for Africa

At Moody, Mary's life was filled with work, Bible study, singing, and serving with ministry teams. She wanted to devote her life to God as a missionary to Africa and applied for missionary service following graduation. Imagine her dismay when she received a letter from the church board stating there were no openings for black women to serve in Africa.

She was just twenty years old. I am sure she held that letter close to her heart and heaved a huge sigh. I would not be surprised if her pillowcase were soaked with tears. But it's a testament to her resilience that her story did not end there. She sent this letter of response:

Christ has called me to the work. His command is to "Go." I am so glad He has counted me worthy to lay this Great Command upon my heart. I am so glad he did not designate any particular color to Go.

Instead of seeing this closed door as the end, Mary sought God's will for her future. She said, "Whenever the Lord says no to me, I look into my heart and search my motives. For it is only the selfless me that God can use."

Mary left Illinois and traveled south to teach at mission schools in Georgia and Florida. In 1898, she married a fellow teacher, Albertus Bethune. The couple had one child, but their marriage deteriorated, and Albert left her before his death in 1918.

After moving to Daytona Beach, Florida, Mary saw the need for African-American children, specifically girls, to receive an education. In 1904, with only $1.65 to her name, she rented a broken-down cottage for her first school. She recruited five girls and taught them service skills but also to read and write. She used old peach crates for make-shift desks and made pencils from charred wood.

Mary begged for money, selling sweet potato pies and fried fish on the street corners to wealthy tourists. She invited donors to be on the board of a school that looked like nothing more than a shack. Of those early efforts Mary wrote:

In less than two years, her school grew to 250 students and four teachers. Many years later, it would become Bethune-Cookman University.

Her activities on behalf of African Americans solicited controversy. In 1920, when women were first allowed to vote, Bethune encouraged black women to register, despite intimidation by the Ku Klux Klan.

One night, the Klan showed up in capes and horses on her campus. Mary gathered her students together, threw on all the lights, and sang them off the grounds. And that same year, with Mary's help, 460 area black women registered to vote in Daytona Beach—a significant achievement since only 488 white women were registered.

Mary's work on behalf of African Americans received attention from the White House with an invitation to attend a Child Welfare Conference held by President Calvin Coolidge. In 1934, President Franklin Delano Roosevelt called a meeting of outstanding Americans to address the problem, and Mary was on that list. He created a position for her at the White House.

He said of her, "Mrs. Bethune is a great woman. I believe in her because she has her feet on the ground—not only on the ground but in the deep, plowed soil."

Bethune's work with Roosevelt began a longstanding career of government service. In 1953, she was invited to travel to Africa as the part of a special team of United States representatives for the inauguration of their president. Where once she had been turned away, Mary now went with great honor.

As she neared her final years, Mary transitioned to the role of president emeritus of Bethune-Cookman and handed over the leadership of her life's work.

One day Mary sat in the breakfast nook at her home on the school's campus remembering how, when she was a little girl, she had longed for a home with real glass windows. How far she had come! Contemplating her life and legacy, she wrote, "When I wake up in the morning and look around, see my glass windows, I see my Bible on the table, see the rug on my floor, my bathroom, my bathtub, I have a thanksgiving in my heart for what God has done for me."

In Daytona Beach, you can visit Mary's home and gravesite on the Bethune-Cookman college campus. The grave of their founder has an epitaph that says:

She has given her best that others may have a more abundant life.

Mary's life was filled with doors that slammed shut. But even when faced with seemingly insurmountable odds, she refused to wallow in disappointment. Instead this brave woman of God faithfully followed His leading, and the result was a life filled with abundance.

Would you like to learn more about Mary McLeod Bethune—as well as seven other women who were passionate about serving God and people? If so, we recommend Jamie's book, When Others Shuddered: Eight Women Who Refused to Give Up.