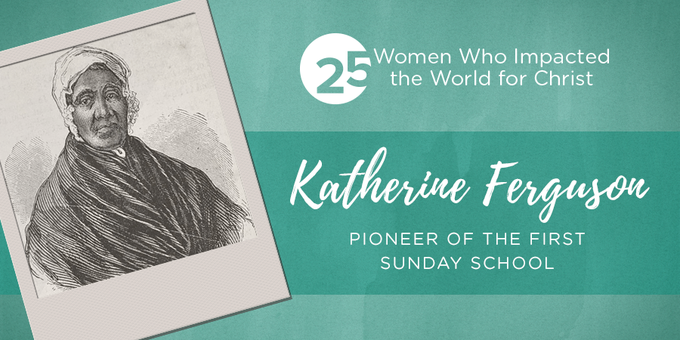 The last prayer seven-year-old Katherine Ferguson heard from her mother was just hours before the two were separated by slavery for the rest of Katherine's life. Her mother committed her much-loved daughter into the hands of God. For the rest of her life, Katherine chose to believe and live out that prayer. She belonged to God.

The hope of freedom was a trait passed down through the generations for Katherine's family. Her grandmother, Sowei, a member of the Mende tribe, had been captured by slave traders in the Bight of Biafra on the western coast of Africa and brought to America. She birthed her first baby shortly after arriving in America and then bore two more children as a slave, including Katherine's mother. Sowei dreamt of freedom for her children and planted a seed of hope in Hannah.

Katherine's mother, Hannah Williams, was a slave on a plantation in Virginia. In 1771, Hannah married a man named Tom and was soon expecting their first child. With the seed of freedom in her heart, Hannah and Tom made plans to escape—plans that meant Hannah would leave first, Tom would follow later, and hopefully the two would find each other again. They never did.

In 1772, Hannah snuck aboard a schooner docked near the plantation she worked on, and a few days later, hidden in the belly of the ship, she gave birth to Katherine. A doctor aboard had mercifully cared for Hannah and the baby girl until they reached New York. But once they were off the ship, that same doctor sold a weakened Hannah as a slave to a friend in the city named Mr. Bruce, who owned a dry goods store.

Hannah served Mr. Bruce and his family well, caring for their home and children while caring for her own daughter. Mrs. Bruce renamed Katherine, "Katy," because she thought Katherine was "too proper a name for a Negro." Hannah took her daughter to the Scottish Presbyterian Church with the Bruce family every Sunday and sat high in the gallery with other slaves hearing words of truth from the pastor, Mr. Mason.

In those days, slave traders offered money to slave owners whom they knew to be in financial distress. Rumors of Hannah potentially being sold swirled around the community of slaves who attended the Presbyterian Church. When those rumors reached Hannah, she prayed desperately for God to spare her from being separated from her daughter and committed her daughter into the hands of her Father God, no matter what might happen.

Hannah was indeed sold and torn away from her dear daughter in 1779. Katy assumed much of the work her mother had been responsible for in the Bruce home, including the care of their children and general housework.

When Katy was twelve, she began accompanying the two oldest Bruce children when they went to catechism classes at the Presbyterian church. The teacher allowed her to sit in the back and listen. It was there that the truth of God's Word pierced Katy's heart. The anger and hatred she had for Mr. Bruce and those who had taken her mother away began to dissipate in the light of the love of Jesus and His truth.

Then in 1786, while out doing errands for the Bruce family, she stopped by the Scottish Presbyterian Church to speak with Pastor Mason. Katy confessed that she was a sinner and needed Jesus to save her. She told Pastor Mason how her mother had put her in God's hands and now she wanted to trust Jesus for herself. The kind pastor prayed with her and baptized her. Katy then shared her dream with Pastor Mason—her dream to open a school for poor children and teach them about Jesus. Pastor Mason encouraged her and even insisted that she partake in communion at the next church service. Despite some backlash from both white and black people in the congregation that day, Katy declared her faith and began her public service for God.

When she was fifteen, Katy received a suggestion from one of her mother's friends that would shape the rest of her life. He suggested that she might be able to begin her school in the barracks of an abandoned Dutch fort in the city. The fort was in shambles, having barely survived a fire, but it was available and unwanted by anyone else.

That night, Katy prayed fervently for the Lord to prepare the way to make a school in the fort barracks a reality. First, she approached Mr. Bruce. She bravely told him her dream for the school and the possible location and asked for permission to talk to Pastor Mason for help. Mr. Bruce gave his permission, but only on the condition that Katy make baked goods to be sold in his store and work for a friend of his a couple hours a day. This became her pathway to freedom. Mr. Bruce soon made enough money from this arrangement that he released Katy as his slave and she received her "freedom papers." Though she could not read the proof for herself, Katy was free. Her grandmother's dream had come true.

But with freedom came much toil. While the fort barracks had decades of rubble, they also had a stone oven where Katy could bake her delicious tarts and cakes. Clearing out the barracks and selling her baked goods was exhausting work. However, John Ferguson, a man who helped her peddle her baking, began to encourage and compliment Katy. He was a man who loved and trusted God. After a brief courtship, the two were married in 1789.

As a newlywed couple, John and Katy Ferguson worked together to finish preparing the fort barracks. Soon children from both the Presbyterian church where Katy had worshiped as well as the Methodist church where John and Katy were now members came to learn about the Bible on Sundays. The first known Sunday school had begun. John also began bringing abandoned children—both white and black—he found on the streets home to Katy. Some would stay for a short time until John and Katy found a home for them, and some stayed for years. Katy would wash, feed, and clothe them, then teach them stories and verses from the Bible. Though she had never learned to read, the Bible was planted deeply in her mind and heart. She taught those children to memorize and know the Bible as she had. Just as Katy knew her identity was in God, she planted the same in the children teaching them the matchless hope and freedom in Christ.

But soon, great tragedy struck Katy's life. John and Katy were forced to move out of the fort barracks into a rented house when their first daughter, Abigail, was born. Then when Katy was expecting their second child, John was killed while he worked at the New York City docks. Grief struck Katy deeply. It went even deeper as her second daughter, Julia, was stillborn shortly after John's death. Then just a few years later as yellow fever tore through the city, it claimed the life of Abigail. If it had not been for Katy's deep faith and trust that she belonged to God and the Bible truth that surged through her mind and heart, she would have surely crumbled under the weight of loss.

Instead, Katy continued to welcome poor children and adults who wanted to know more about God and the Bible into her home. Prayer was a constant centerpiece. Toward the end of her life, the children she had taught, loved, and cared for through the years often returned to spend time with and thank their beloved teacher. In 1853, as one of those children read the Bible aloud to her, Katy died and went to be with the Savior who had held her all her life.

She Belonged to God

Katherine "Katy" Ferguson believed her mother's prayer. She endured slavery, arduous work, and tremendous loss because she knew her identity was in her Savior and not her circumstances. Katy trusted God. She experienced the power of His Word, and though she never could read it herself, she loved, knew, and lived that Word. She spent her life living out and teaching its truth.

Want to know more about the life of Katherine Ferguson? I recommend her fictionalized biography by Margaret Pagan, More Than a Slave.

Previous Post Salvation: So Much More Than Accepting a Good Offer
Next Post The Wonder of Oneness