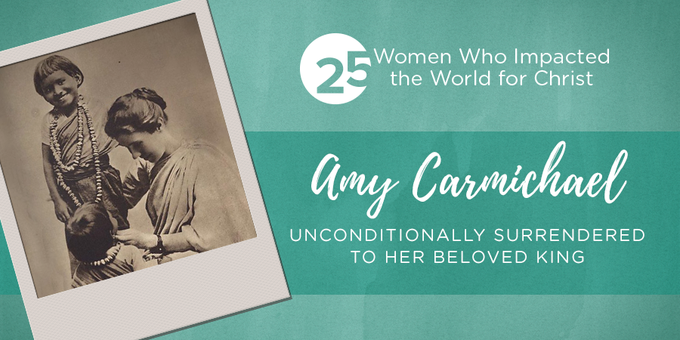 Have you ever read a passage so many times that it loses its gospel edge? And then God graciously opens the ears of your heart to hear those familiar words anew, intimately spoken to you through His Spirit? God may use your own quiet time with Him. Or maybe a Bible teacher helps you to see an old truth in a more profound way.

Has God ever used another believer to awaken deeper knowledge of His ways? For me, the life of Amy Carmichael (1867–1951) has magnified and clarified these well-known but often unabsorbed words from Matthew 16:25: "For whoever would save his life will lose it, but whoever loses his life for my sake will find it." I can say, along with her biographer, Elisabeth Elliot, "She showed me the shape of godliness."

Amy Carmichael was born into a wealthy Presbyterian family in Northern Ireland. The oldest of seven children, she had a happy childhood in her secure and loving, albeit strict, home. Her family experienced financial hardship during her teen years, forcing Amy to leave boarding school to come home to help her family. Her father's death when she was seventeen, along with her own physical pain and weakness in the form of neuralgia, only led her more deeply into God's Word and His ways for her life. How was she to serve her King?

She spent her early twenties serving in home mission work among the poor. But in 1887 she heard Hudson Taylor, founder of the China Inland Mission, speak at the Keswick Convention and soon afterward became convinced of her calling to foreign mission work. She responded with wholehearted devotion.

Although initially Amy served in Japan, China, and Ceylon, her greatest ministry centered in the southern tip of India. There, through almost insurmountable hardships—the political threats, the caste system, a new language, tropical heat, physical ailments, coworker defections, financial shortages, and children, always more children coming to her—she founded the Dohnavur Fellowship, a community for children in danger of being forced into outrageous work at local shrines and temples. Hindu temple children were primarily young girls dedicated to the gods and then forced into prostitution to earn money for the priests. Over the next five decades Amy would help rescue and raise over 1,000 children.

Her Leadership: Wounds and Scars Were Taken for Granted

Amy served in India for more than fifty years without a furlough home. Many sought her advice about mission work. Her response? "To any whom the Hand Divine is beckoning: count the cost, for He tells us to, but take your slate to the foot of the Cross and add up the figures there."

When someone asked to join her team of workers, Amy would tell them, "Do not come unless you can say to the Lord and to us, "The cross is the attraction." Although she did not intend to make her life look like a hard one (wouldn't that make her Master appear hard?), she never avoided talk of the heat, the isolation, the primitive conditions and disease and death. Wounds and scars were taken for granted.

No wound? No scar?
Yet, as the Master shall the servant be,
And pierced are the feet that follow Me;
But thine are whole: can he have followed far
Who has nor wound nor scar?

I find Amy's example personally piercing when I am tempted to complain to God about all our children and granddarlings living so far away. Present-day technology allows me to connect in minutes with their dear faces, and airplanes wing me to them at least once each year. But for Amy? Her only communication was handwritten letters, and how slowly the responses from home seemed to come! She wrote in her later years regarding leaving family and friends to serve so far away, "My life, on the human side, was broken, and it never was mended again. But He has been enough." She believed, and found comfort in the knowledge that "we shall all be together soon in the Father's Country."

With so many to care for—both workers and children—her faith was often tested. Questions came at her from all sides, both at home and in her new country. How will you feed so many? What will you do with the anger of the temple priests for "stealing" their source of income? When will you find time and resources to educate the older children? Where will you get the funds and laborers for more needed buildings? Amy knew that faith did not mean the answer to every question in life. But she had Someone to take those questions to, and she spent much time in prayer seeking His answers. She believed God led His children in three ways—through the Word, through the inward leading of the Spirit, and (often, but not always) through circumstance. "If the voice is God's all three will agree." When and where He led, she followed. She trusted Him to guide and provide.

She learned through the years not to give in to future fears. When the time came, she found she didn't mind anything nearly as much as she had feared she might. God always supplied His promised grace. "He goeth before."

Amy Carmichael left us many godly examples of how to love Christ, His Body, and our mission field. I need her example, and I need God's help to follow these principles her life has taught me.

Never about, always to. Amy led Dohnavur as a family, not an institution. She asked for deep loyalty toward one another among the workers. If there was a problem, workers knew they were to go directly—to-not around—each other. No gossip or backbiting was tolerated. This meant that they were all expected to protect and defend their unity.

My husband and I have adopted this principle in every area of our lives. It creates a culture of safety within our family, our small groups, our church, our neighborhood. Is their name safe in our house? "Let no corrupting talk come out of your mouths, but only such as is good for building up, as fits the occasion, that it may give grace to those who hear" (Eph. 4:29).

Love to live, live to love. Amy governed her own life by asking not how little but how much could love give. She studied, as she put it, "the brave and burning souls of every age who had left torches" to light the way of discipleship, for herself and all who came to serve with her. All were called to a settled happiness in the Lord, where promotion meant not more honor but more work, harder work, with Amy leading the way.

"So you also, when you have done all that you were commanded, say, 'We are unworthy servants; we have only done what was our duty'" (Luke 17:10). What is the Lord teaching you about "loving to live, living to love" through this series, "25 Women Who Impacted the World for Christ"? Is their any new direction you want your life to take in light of these Christian heroes you're reading about?

Give up your right to yourself, take up the cross, follow. This was a lesson that was reviewed many times in Amy's life. It was especially difficult when a beloved and much-needed teammate would leave unexpectedly never to return or dysentery would spread throughout the nurseries, draining life from tiny bodies newly rescued, when sorrow and sickness would threaten to undo them. One of my favorite poems of hers prays this principle into her life:

From prayer that asks that I may be
Sheltered from winds that beat on Thee,
From fearing when I should aspire,
From faltering when I should climb higher,
From silken self, O Captain, free,
Thy soldier who would follow Thee.

From subtle love of softening things,
From easy choices, weakenings,
(Not thus are spirits fortified,
Not this way went the Crucified,)
From all that dims Thy Calvary,
O Lamb of God, deliver me.

Give me the love that leads the way,
The faith that nothing can dismay
The hope no disappointments tire
The passion that will burn like fire,
Let me not sink to be a clod:
Make me Thy fuel, Flame of God.

Live every day until you die. When we read of all Amy's accomplishments—the ever-expanding ministry she led, the books she wrote, the money she raised, the children she mothered as "Amma" (Tamil for mother)—we rarely think of the hardships she battled. She fought through devastating bereavements, deep emotional demands, insomnia, heart trouble, hypertension, and other emotional and physical trials that only proved, "My grace is sufficient for you, for my power is made perfect in weakness" (2 Cor. 12:9).

One evening in October 1931, Amy was touring a deserted house in a nearby village, thought by the locals to be haunted. She hoped to acquire it as an inroad into this yet unbelieving area. As she went out back to use the primitive outdoor "facility," she fell across the opening of the narrow pit, breaking her leg, twisting her spine, and dislocating her ankle.

She would never fully recover. When home from the hospital, her world was limited to short steps around her bedroom, sitting room, and study. She saw herself, like Paul, "a prisoner of the Lord," having paid a price for beginning a witness in a closed town. Her loved ones installed a proper bed instead of a mat on the tile floor, and she learned to accept this luxury, along with flowers and trinkets from her beloved children. All hoped and prayed for her recovery, but it never came.

For almost twenty years, "Amma" mothered from her bed or chair, seeing different family members every half hour despite her almost constant pain. All decisions were referred to her. But like any wise leader, she tried her best to prepare her people for her departure. "When decisions have to be made, don't look back and wonder what I would have done. Look up, and light will come to show what our Lord and Master would have you do."

During this time as an invalid, she wrote. And wrote. And kept writing. She wrote fourteen books during these years. Besides the books that were published, she wrote privately for the family there—thousands upon thousands of personal letters, along with hundreds of songs and poems. There was a constant theme throughout all her writing: We are saved to serve. She lived out that theme until her death in January 1951. Although many grieved their loss, they did so against her will, for she had written, "When you hear I have gone, jump for joy!"

Where is God giving you "a chance to die," the opportunity to acknowledge once again the lordship of Christ in your life, to follow Him to the uttermost, to say "yes" to your Lord? Fight the good fight until the very end. Faint not, and finish your race with joy, for the Lord will award to you, also, your own crown of righteousness "on that Day" (2 Tim. 4:7–8). What a day that will be!

Previous Post What’s the Compassionate Approach to the Transgender Bathroom Debate?
Next Post Answering Our Kids’ Questions About Transgender Policies