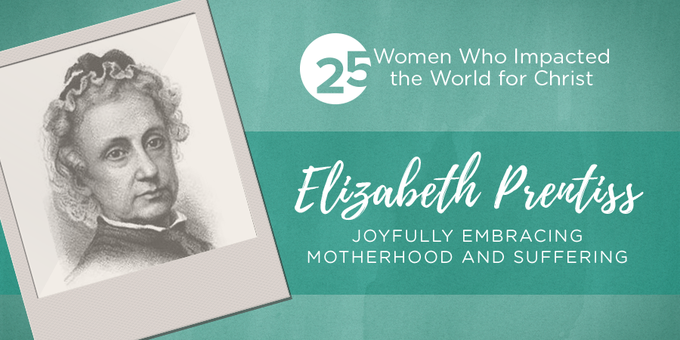 It had been an especially difficult morning at home with my little people. There were at least five reasons why the day should be dubbed as unrecoverable, and it wasn't even 9 a.m. By this time I had broken up a few fights, corrected children who needed to re-do chores, and begun nursing the baby when my toddler notified me she needed a diaper change. Immediately.

I suppressed a sigh. I was getting nowhere fast on my to-do list, and feelings of discouragement threatened me. As I mentally revisited my priorities as a wife and mother, I reflected on my recent readings about the life of Elizabeth Prentiss.

I first read of Elizabeth Prentiss more than ten years ago, when Elisabeth Elliot mentioned her as an author whose books had influenced her. Not being one to take those recommendations lightly, I set to work collecting the works of Elizabeth Prentiss and learning more about her life. I was left with a sense of wonder and admiration at her industry. Although she suffered her entire life from severe headaches and hereditary insomnia, she faithfully filled the role of a pastor's wife, a homemaker, the mother of six children, and an author. Most would agree that what Elizabeth accomplished in her lifetime would be incredible for a healthy person, not to mention that of a woman with chronic health afflictions.

God has used her gifts as an author for over one hundred years, most notably in her classic book Stepping Heavenward as well as the hymn "More Love to Thee." But as a woman who has spent over half my life mothering young children, it is Elizabeth's writings of motherhood that minister most to my heart. It has been said that her delight in her role as a mother was with her more than instinct. It was a passion that triumphed over physical burdens, pain, and the responsibilities of literary and pastoral life.

Welcomed as the fifth child and a longed-for daughter, Elizabeth Payson Prentiss was born to Mr. and Mrs. Edward Payson of Portland, Maine. Elizabeth's father was a Congregationalist pastor with deep Puritan roots. The family met three times daily for prayer together. Her father once wrote, "O what a blessed thing it is to lose one's will." This submission to God and the devoted heart of her father made its mark on Elizabeth and her writings.

Many believe that the genius of Edward Payson's mind was passed to his daughter. Though he died when she was nine years old, the short years of fatherhood he faithfully devoted to his daughter have indirectly affected millions of people.

Elizabeth made a profession of her faith in Christ at age thirteen. As a young woman, Elizabeth was already known as having virtuous character and a public devotion to Christ. She began contributing stories and poems to The Youth's Companion, a New England periodical. By the age of twenty, she opened her own school for girls in order to help with the financial support of her widowed mother and younger siblings.

A few years later, this daughter of a pastor also married a pastor. Elizabeth became the wife of George Prentiss and tirelessly devoted herself to the congregation despite her own relentless health issues. She was said to be a presence of sunshine in sickrooms and the house of mourning, and "she seemed like one specially anointed of the Lord for this gentle office."1 Once writing to a friend that she "never knew what it was like to feel well," Elizabeth was often found among the sick, mourning, weary, and weak, as if obeying a direct call from God.

Elizabeth's abilities as an author grew as she aged, although there were thirteen years that her pen saw no paper except in correspondences. Her duties as a wife and mother to her six young children, as well as her chronic health problems, prevented her from writing. When she again gave herself to literary labors, she had a deeper well of experiences to draw from. She wrote dozens of Christian books and poems in her lifetime, published during an era that women authors did not have much voice.

In 1869, her book Stepping Heavenward, a fictionalized account of her life, was published. One of the most often quoted portions of this book reveals her views on motherhood and her eternal perspective of raising up the next generation:

She says I shall now have one mouth the more to fill and two feet the more to shoe, more disturbed nights, more laborious days, and less leisure or visiting, reading, music, and drawing.

Well! This is one side of the story, to be sure, but I look at the other. Here is a sweet, fragrant mouth to kiss; here are two more feet to make music with their pattering about my nursery. Here is a soul to train for God; and the body in which it dwells is worth all it will cost, since it is the abode of a kingly tenant.

I may see less of friends, but I have gained one dearer than them all, to whom, while I minister in Christ's name, I make a willing sacrifice of what little leisure for my own recreation my other darlings had left me. Yes, my precious baby you are welcome to your mother's heart, welcome to her time, her strength, her health, her tenderest cares, to her lifelong prayers! Oh, how rich I am, how truly, how wondrously blest!

Elizabeth's point was beautifully made. There is a lot of work involved in the mothering of children. Yet only two things are eternal: the Word of God and the souls He creates. Oh, that God would give mothers fresh perspective on the ordinary duties that consume our time and grant us renewed vision for the glorious calling of motherhood, such as Elizabeth Prentiss had! She knew that nurturing the physical body was the house of the soul, and the soul of the child is worth our love, focused attention, and gratitude to God for this earthly assignment that will carry into eternity.

May we fully welcome children as Elizabeth Prentiss did, and make a willing, joyful sacrifice for the time and efforts they require.

Elizabeth's deep commitment to family is clearly evident in all her writings. Aunt Jane's Hero joins Christian fiction into a marriage manual for young couples. The Home at Greylock assists young families who are seeking to parent children with biblical principles and wisdom. As a novelist her aim was to "tell the coming generation the glorious deeds of the LORD, and his might, and the wonders that he has done" (Ps. 78:4).

The School of Suffering

Along with her ongoing health problems, the suffering and death of two of her children, occurring within a few months of each other, left their mark on her.

There is no wilderness so dreary but that His love can illuminate it, no desolation so desolate but that He can sweeten it. I know what I am saying. It is no delusion. I believe the highest, purest happiness is known only to those who have learned Christ in sickrooms, in poverty, in racking suspense and anxiety, amid hardships, and at the open grave.

Elizabeth Prentiss died at the age of sixty, dropping the load of her human frailty. Her desire to love Christ more and be fully submitted to His will, including in the realm of motherhood, was a frequent subject in her journals and published writings. And isn't this the fulfilling of the greatest commandment God has given us? To love the Lord our God with all our heart, soul, mind, and strength should be our lifelong pursuit. Elizabeth Prentiss did that faithfully, despite many trials.