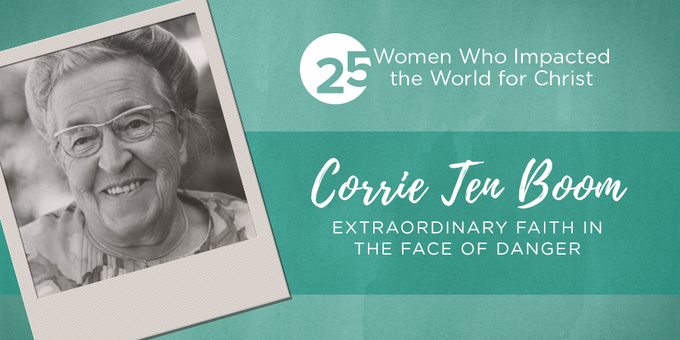 Living in German-occupied Holland in 1944, Corrie ten Boom was leading an underground network protecting hundreds of Jews all over the country. This work earned her a ticket to Ravensbruck, a despicable Nazi concentration camp, where unspeakable suffering became the backdrop to a new ministry of prayer meetings in flea-infested barracks and ministering the Word of God to anyone in need.

Great saints of previous generations can seem larger than life, gifted in unattainable ways, accomplishing feats of unheard spiritual impact. But in reality, Corrie, the youngest of the four ten Boom children, was not particularly outstanding. She had no unusual skill set, no exceptional intelligence, no plans to change the world. Yet this ordinary woman emerges from the great cloud of witnesses to show us what God can do with extraordinary faith and radical obedience in the simplest of His people.

A Greenhouse: Her Early Years

The household rhythm of Bible reading in the ten Boom home was as predictable as the watches they fixed in their shop. Here the Word of God, read morning and night, was the heartbeat of this cramped, impoverished home. Accompanying this showering of the Word were the generous hearts of Corrie's parents, Casper and Cornelia. Never aware of the limits of their own lack and poverty, they often gave the last of what they had. It was in this greenhouse of Bible reading and sacrificial love that Corrie grew up.

Like most young women, Corrie hoped for the romance she read about in novels. But God's clear denial of this dream came when the love of her life introduced her to his fiancée. With her father's guidance, Corrie surrendered her only hope of ever marrying: "Lord, I give You the way I feel about Karel, my thoughts about our future—oh, You know! Everything! Give me Your way of seeing Karel instead. Help me to love him that way. That much."

Radical Obedience: Working in the Underground

In 1942, Gestapo arrests were in full force. Corrie, now fifty years old and living with her older sister and father in their well-loved Haarlem home, heard the first knock from a fearful Jewish neighbor. The ten Booms found that they could not turn down their Jewish friends any more than they could turn down a hungry errand boy at their alley door hoping for a fresh cup of soup. Having cared for eleven foster children after his own were grown, Casper ten Boom never turned down anyone in need.

As more timid knocks came, Corrie realized their location was too dangerous due to its nearness to the police headquarters. Thus began the complicated underground work of relocating Jews to houses in the country where they could hide without exciting the attention of German guards. Amazingly, the ten Boom home was perfectly fit to be a hub for this work since "they were friends with half of Haarlem."

In Corrie's words, "My job was simply to follow His leading one step at a time, holding every decision up to Him in prayer. I knew I was not clever or subtle or sophisticated; if [our home] was becoming a meeting place for need and supply, it was through some strategy far higher than mine." Herein we see what was so incredible about the ten Booms—never was the desire to change the world but rather to obey the One who was truly in charge.

As their work continued, they housed the Jews who were especially difficult to hide (a woman with a baby, an older woman with labored breathing). In the words of their very Jewish-looking resident Eusie, "It seems to me that we're all here in your house because of some difficulty or other. We're the orphan children—the ones nobody else wanted."

Fully aware it was only a matter of time before they were caught, they continued to help those in need. And so it was, on February 28, 1944, their home was raided and Corrie and her family were taken to prison. The ten Boom family, now on the floor of a gymnasium waiting to be registered and escorted to jail, ended the day the same way they had every day of their lives—with Bible reading and prayer. Corrie's father recited from memory Psalm 119: "Thou art my hiding place and my shield: I hope in thy word. . . . Hold thou me up, and I shall be safe" (vv. 114, 117).

God's Love Is Deeper: At Ravensbruck

After three long months in prison (Corrie spending most of it in solitary confinement), Corrie and her sister, Betsie, were transferred to a concentration camp in Holland for another three months. Though these experiences would be to any of us the worst of our lives, for the ten Boom sisters, now fifty-two and fifty-nine, it was only a foretaste of worse horrors to come.

After the three-day "nightmare train ride" to the dreaded Ravensbruck concentration camp in Germany on September 8, 1944, there was hope in the ten Boom sisters. By God's help, a Bible had miraculously made it with them thus far, hidden in a pouch around Corrie's neck. Through yet another God-ordained moment, the precious package made it through the stripped-down search to the showers. "And so it was that when we were herded into [the shower room], we were not poor, but rich. Rich in this new evidence of the care of Him who was God even of Ravensbruck."

Ravensbruck. Home to shameful naked examinations, beatings and floggings, lice and fleas, sickness and overflowing toilets, starvation and hard labor, freezing temperatures and threadbare blankets. It was here, in the heart of Nazi Germany, that Corrie and Betsie were called by God to be ministers of the gospel. All the years of ordinary, consistent, faith-filled obedience had prepared in them a ready and willing "yes" to God, agreeing to bring His Word even to hell itself.

One thing became increasingly clear: the reason the two of us were here. From morning until lights-out, whenever we were not in ranks for roll call, our Bible was the center of an ever-widening circle of help and hope. Like waifs clustered around a blazing fire, we gathered about it, holding out our hearts to its warmth and light. The blacker the night around us grew, the brighter and truer and more beautiful burned the word of God.

In the deepest pit imaginable, here God's love was deeper still. And in the darkest night, His Word shone all the brighter.

Betsie died in Ravensbruck on December 16, 1944, and weeks later, Corrie was released. Less than six months later, she had opened a Christian rehabilitation center for war victims and eventually turned their old home over to former NSBers (Dutchmen who had worked for the Nazis who were more hated than the Germans themselves).

Barely a year outside of her release from Ravensbruck, Corrie had already published a book and was traveling to share her story. The greatest test of faith came as a former German guard (and new believer) approached her after a speaking engagement to shake her hand. He was in fact one of the very guards she and Betsie had been forced to strip naked in front of.

Aware of no goodness or strength within herself to extend her hand in forgiveness, she prayed "Jesus, I cannot forgive him. Give me Your forgiveness." The resulting overflow of love that sprang from her heart after that prayer brought realization "that it is not on our forgiveness any more than on our own goodness that the world's healing hinges, but on His. When He tells us to love our enemies, He gives, along with the command, the love itself."

Only a stroke in 1978 could slow Corrie down from sharing the message of God's deep love in dark places. She had spent her later years on a busier schedule than most half her age, traveling around the world to share the story of God's love. As her assistant, Pam, watched her sit paralyzed for five years after that stroke, she commented on the graceful way Corrie endured her final years: "Doing nothing, if the will of God required it, was surely a greater art for an active gifted person than was doing much. And yet she was doing it. I was watching her undergo the test."

Corrie ten Boom was an ordinary woman with profound hope in a faithful God. Though she didn't set out to change the world, her faith-filled steps of obedience, day by day, did just that. The question is, will we follow her example of extraordinary faith by taking those same small steps of obedience to God today?