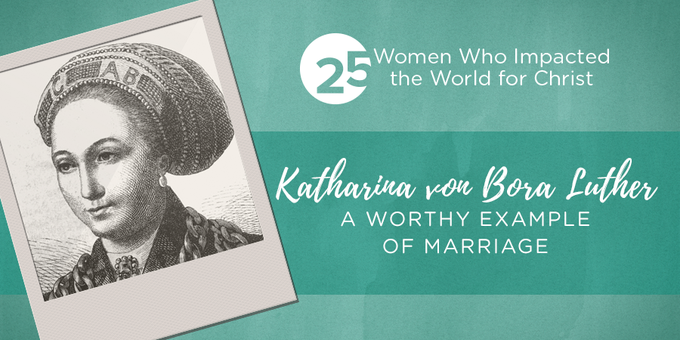 Katharina von Bora, wife of the great Protestant Reformation leader Martin Luther, is often considered a crucial participant in the Reformation movement because of her role—with her husband—in defining Protestant family life and providing a worthy example for marriages within the clergy.

Though her actual heritage cannot be historically proven, she is believed to be from the knightly Saxon gentry, born around 1499.

Katharina's formal education began as a small child when her father sent her to a Benedictine cloister in 1504. She moved to a Cistercian convent four years later and became a nun at age sixteen. Dissatisfied with her life, she became curious about the new Protestant Reform movement, and soon after, she and eleven other nuns conspired to flee in secrecy—a dangerous move, punishable by death. Katharina contacted Martin Luther, begging for his assistance.

On Easter eve in 1523, Martin sent a merchant who regularly delivered fish to the monastery to help the nuns escape in some fish barrels in his covered wagon. Martin asked the women's parents and relations to take in the refugees, but they declined. Taking in escaped nuns was a crime under canon law.

Within two years, Martin was able to arrange homes, marriages, or employment for all of the runaways—except Katharina. Martin tried to marry Katharina off to two suitors, but neither arrangement worked out.

On Assignment from God

Katharina, who converted at age twenty-four, grew steadily in her study of the Bible. She once confided in Nicholas von Amsdorf (a friend of Martin's and a fellow Protestant reformer) that she would be willing to marry only Martin or himself. Philipp Melanchthon, another of Martin's close friends, believed marriage to a refugee from a nunnery might be scandalous and even damage the young Reformation cause, but Martin's father and others were more positive and encouraged him.

Martin, a "confirmed bachelor," grappled with marrying, but eventually decided his marriage "would please his father, rile the Pope, cause the angels to laugh and the devils to weep." In 1525, the former monk and former nun married—the day after Martin proposed! Katharina was twenty-six years old and Martin, forty-one.

Katharina considered her marriage an assignment from God. Though she didn't marry for love, it became a happy and affectionate marriage, a powerful love story. The couple worked hard to set a good example of marital strength for other Reformers.

They took up residence in a former dormitory for friars in Wittenberg—a wedding gift. Katharina's new life consisted of administering and managing the vast holdings of the former monastery, turned into a medieval guest house populated with boarding students and visitors seeking audience with her husband. Tasks also included gardening, cooking, breeding and selling cattle, and running a small business to help provide for their growing family. When illness swept through the town, Katharina also operated a hospital on the side and ministered alongside the nurses.

Luther called his wife "the boss of Zulsdorf" (referring to the name of their farm) and also "the morning star of Wittenberg" for her habit of rising before the dawn to meet her many responsibilities.

Both Martin and Katharina were strong personalities. She was described as "feisty" and Martin thought her a bit proud at times, but many stories describe Katharina's attempts to civilize Martin, who was from peasant stock. Like many couples, they fought over finances. Martin once jokingly called Katharina "lord," because, he discovered, in a good marriage husbands actually need to take their wives' wishes into account.

But Martin reserved other names for his adored wife, including "Beloved," "My true love," and often, "My sweetheart Kate." He loved her resourcefulness, dedication to detail, and faithfulness to Christ. They were a great example for pastoral families in their day.

The Luther family experienced many joys and sorrows in their family life. Katharina bore six children and raised four orphans. Two of their children died, and Katharina also suffered a miscarriage. Reports say they doted on their children as diligent, disciplining, and loving parents.

It's said Katharina's role as Luther's wife paralleled the marital teachings Martin shared and its impact on the Protestant Reformation. A woman known for her wisdom, she respected her husband, formally calling him "Sir Doctor." But Martin also respected his "Katie," not only for her estate duties but also her great wisdom. Katharina directed the renovations of buildings to accommodate their growing operations. Martin trusted his companion's judgment and occasionally consulted her on church matters or to deal with his publishers. Once she was on a search committee to hire a new pastor, unheard of in those days. She was Martin's sole heir, also unexpected in the early 1500s.

Katharina's Legacy to the Church

After Martin died in 1546, Katharina was heartbroken. She wrote, "God knows that when I think of having lost him, I can neither talk nor write in all my suffering." She also suffered financially without his salary, even though she owned land, properties, and the former monastery (now called Lutherhaus).

She did not want to sell and leave the old abbey, but was forced to move out twice at the outbreak of two wars. Finally, in 1547, she returned to Wittenberg to find the lands and buildings laid waste and her resources devastated. Still, she refused to sell the land and buildings, and—though cared for by several generous men—she lived in relative poverty in Wittenberg.

With the outbreak of Black Plague, she fled to Torgau where she was seriously injured in an accident with her wagon and horses and died three months later in 1552. She was fifty-three. After her death, the old abbey was sold back to the University by Luther's children.

Martin once testified, “There is no more lovely, friendly and charming relationship, communion, or company than a good marriage.” Beyond their unusual love story, Katharina’s greatest legacy was the strength of marital fidelity and a godly example to the church.

PS: Would you like to learn more about Katharina? We recommend her biography, Katharina von Bora: A Reformation Life by Rudolf Markwald.