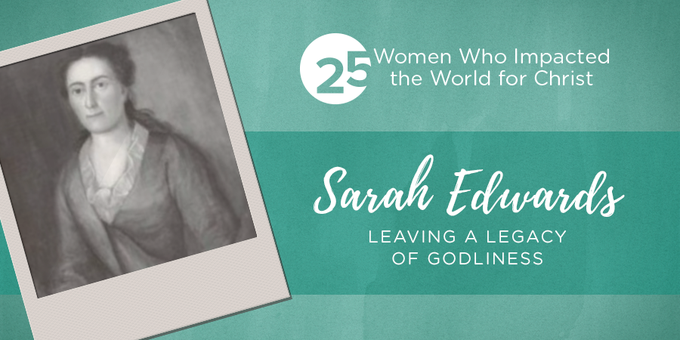 When she was just thirteen, her godliness drew the eye of Jonathan Edwards, who would later become a famous American pastor of the Great Awakening. He wrote:

They say there is a young lady in [New Haven] who is beloved of that Great Being, who made and rules the world, and that there are certain seasons in which this Great Being, in some way or other invisible, comes to her and fills her mind with exceeding sweet delight, and that she hardly cares for anything, except to meditate on him . . . you could not persuade her to do anything wrong or sinful, if you would give her all the world, lest she should offend this Great Being. She is of a wonderful sweetness, calmness and universal benevolence of mind; especially after this Great God has manifested himself to her mind.1

Sarah married Jonathan four years later, and they settled in Northampton, Massachusetts, where Jonathan took his first pastorate. The Edwards enjoyed an excellent marriage, "an uncommon union" as he later called it, and together, they were blessed with eleven children.2

During the Edwards' lifetime, the Great Awakening swept across the American colonies. The Edwards' town of Northampton was no exception. In 1742, Sarah herself experienced an awakening. Her husband describes her as having "extraordinary views of divine things" and strong "religious affections."3

Jonathan viewed Sarah's experience as an authentic work of the Holy Spirit and asked her to write it down. This original manuscript was preserved and gives us a firsthand account of her spirituality.4

Wrestling with the Lord

In January of 1742, Sarah wrote that she felt "low in grace" because she cared too much what people thought of her, and she was distressed if the townspeople criticized her husband. She longed to be free of these these cares and to find rest in God as her "only and all sufficient happiness."5

During this time, Mr. Edwards was away and another man, Mr. Buell, filled his pulpit. God used Mr. Buell's preaching to bring about revival in Northampton, and Sarah had to fight feelings of jealousy for her husband.

Sarah's nine-year-old daughter, Esther, describes this event in her journal:

A flaming young preacher, just from the college at New Haven, has come to town. He preaches, every day, and twice a day. . . . My precious mother, though she would gladly conceal it, is not a little exercised to see the people flocking after the young herald of the Cross, as though they never heard preaching before. . . . But, I can see this morning that she has wrestled with the Lord, and gotten the victory, for she says so sweetly and triumphantly: "Would God, that all the Lord's people were prophets, and that God would put his spirit upon them.6

Sarah says of her sin, "I felt very uneasy and unhappy, at my being so low in grace. I thought I very much needed help from God . . . that I might have more holiness." After a time of "wrestling with God for it," she felt a "great quietness of spirit, unusual submission to God, and willingness to wait upon him, with respect to the time and manner in which he should help [her]."7

The Sweetest Night of Her Life

Not long after this, she described an extraordinarily sweet time of communion with God. Sarah remained in state of heightened spiritual awareness for several days. During this time, she was so overcome with joy that she collapsed and temporarily lost her bodily strength. Sarah said,

I never before, for so long a time together, enjoyed so much of the light, and rest and sweetness of heaven in my soul, but without the least agitation of body during the whole time. The great part of the night I lay awake, sometimes asleep, and sometimes between sleeping and waking. But all night I continued in a constant, clear and lively sense of the heavenly sweetness of Christ's excellent and transcendent love, of his nearness to me, and of my dearness to him. . . . My soul remained in a kind of heavenly elysium. . . . It seemed to be all that my feeble frame could sustain, of that fulness of joy, which is felt by those, who behold the face of Christ, and share his love in the heavenly world.8

Jonathan records how rich theological convictions fueled Sarah's joy in the Lord. He writes that she had "an extraordinary sense of the awful majesty, greatness and holiness of God" and "a deep mourning over sin, as committed against so holy and good a God," also "an overwhelming sense of the glory of the work of redemption."9

Following these days of awakening, those closest to her noticed changes in both her attitude and actions. Along with an increased sense of "divine love," she grew in a desire to engage in "moral social duties" and "to prefer others to self."10

What Sarah Teaches Us About Godliness

For Sarah, growth in sanctification and happiness in God were not separate pursuits, but rather two sides of the same coin. She chose daily to resist sin, submit her life to God, and to find her rest and joy in Him.

Sarah prioritized activities that would promote her spiritual health and increase her affections for God. Disciplines like prayer, sitting under preaching, spiritual conversations, and singing rich theological hymns were an important part of her life.

Sarah's days of awakened bliss were an extraordinary blessing, but her spirituality looked less like a sprint and more like a marathon. At the time of Sarah's awakening, she had been a Christian for twenty-seven years, and her husband writes that she had made great progress in sanctification in the previous seven years.11

The reward of knowing God was worth every effort for Sarah. She said of her awakening, "what I felt . . . was worth more than all the outward comfort and pleasure, which I had enjoyed in my whole life put together. It was a pure delight, which fed and satisfied the soul."12

How One Godly Mother Changed the World

Sarah's sanctification didn't happen in a vacuum. The Edwards' eleven children would have had a front-row seat to Sarah's spirituality, and they were no doubt influenced by the godliness of their mother. But her influence didn't end at her front door. Considering that Sarah was a stay-at-home mom in a pre-Internet age, her impact on the world is remarkable.

In 1900, historian A.E. Winship traced Sarah and Jonathan's lineage and published a study. He said, "Much of the capacity and talent, intelligence and character of the more than 1,400 of the Edwards' family is due to Mrs. Edwards."13

Winship reports how by 1900 their descendants included:

According to one biographer, the Edwards' descendants also "entered the ministry in platoons and sent one hundred missionaries overseas, as well as stocking many mission boards with lay trustees."14

Sarah's godliness bore fruit for generations to come, and now, nearly 300 years later, we are still learning from her example.

Sarah's life teaches us that godliness is not just for the professionals. Whether you are a mother with little ones, a grandmother with a gaggle of grandkids, or a spiritual mother in your ministry pursuits, don't underestimate the impact that your personal holiness has on the people around you. In fact, it may be the greatest gift you can give them. When you orient your life to give God glory, you will bear fruit in this life and also in the one to come. What legacy do you want to leave for future generations?

4 Sarah Pierrepont Edwards, Her Uncommon discoveries of the Divine Perfections and Glory; and of the Excellency of Christ, http://digital.library.upenn.edu/women/pierrepont/conversion/conversion.html.

7 Sarah Pierrepont Edwards, Her Uncommon discoveries of the Divine Perfections and Glory; and of the Excellency of Christ, http://digital.library.upenn.edu/women/pierrepont/conversion/conversion.html.

12 Sarah Pierrepont Edwards, Her Uncommon discoveries of the Divine Perfections and Glory; and of the Excellency of Christ, http://digital.library.upenn.edu/women/pierrepont/conversion/conversion.html.