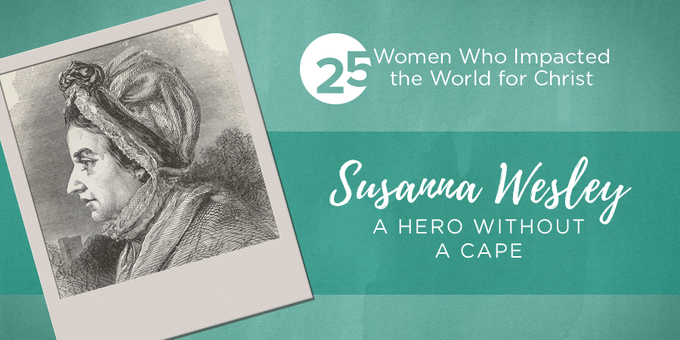 I want to be a hero. I want to save the day, stop the villain, and rescue those in peril. But most days, I can barely find my sneakers, much less a hero's cape. I just don't have the energy to leap buildings in a single bound. More often than not, the cares of life make me the one who needs rescuing, instead of the one swooping in to save others.

But that doesn't mean I have to let go of my hero dreams. As it turns out, no cape or building leaping is required.

A Different Kind of Hero

Studying Christian history is a worthy pursuit because it reminds us of the superheroes of our faith. Consider the Wesley brothers, John and Charles. John was an eighteenth-century English preacher and theologian credited with the revival that eventually became the Methodist Church.

John's brother, Charles, also played a key role in the Methodist revival. You may not know much about Charles, but I'm sure you've sung hymns he wrote, including "Christ the Lord Is Risen Today" and "Hark! The Herald Angels Sing."

John and Charles Wesley are heros of the Christian faith. Their efforts have impacted millions of lives for Jesus. But let's keep digging into their stories. Where did their love for Christ and passion to see His Word preached come from?

Enter the undercover hero of this story—their momma.

She may not have worn a cape, but the Wesley brothers' mom, Susanna Wesley, is a hero because she literally birthed a church.

Susanna knew motherhood was tough—she delivered nineteen children in twenty-one years. Only ten of those babies survived beyond the age of two. Susanna depended on Christ with a contagious ferocity. She educated her children, launched a home church while her preaching husband was away, and took responsibility for her children's souls.

A Different Kind of Cape

Because of the gospel's impact on her own life, Susanna knew better than to try to disciple her large brood in her own strength. When she needed time alone, Susanna sometimes pulled her apron up over her head. It was her clear cue to her children to "leave mom alone." Susanna wasn't hiding under her smock for "me time" but to pray for herself and her family. Those prayers bore fruit in her children's lives and multiplied to reach millions.

I don't often wear an apron, but Susanna's story reminds me of some truths that are critical as I mother my own brood. Truths like:

As mothers, we can all glean something from Susanna's approach. We find a blueprint for how this heroine lived out her faith in some of the rules of her household:

Certainly, any woman who trains her children so seriously is a hero in my book. Her sons may have made some important gains for the kingdom, but their momma led them to their secret source of strength.

In comic books, superheroes get strength from everything from radioactive spiders (Spiderman) to clouds of cosmic energy (The Fantastic Four), but God seems to provide strength and encouragement through the teaching and encouragement of mothers.

I've heard people say that if the AIDS crisis in Africa is going to be solved, mothers will solve it. I believe that's true. Moms have what politicians, doctors, and relief organizations lack—a momma-bear instinct that causes us to do whatever is necessary to protect our children's well-being.

Moms, like Susanna, who apply that God-given tenacity to discipling their children might as well strap on a bright red cape. That powerful combination allows mommas to become a breed of superhero that God can use to fight any evil that tries to rise against our families.

We won't all parent exactly like Susanna did. (There's no way I can get all of my children to be still during worship!) But we can stand on her shoulders by agreeing with her that motherhood is a high and holy calling and seeing our own homes as the place where we can be heros by pointing our children to Christ.

Sending Out the Bat Light

Batman probably ranks high on most lists of superheros. I certainly dig his leather pantsuit and underground lair. But my favorite thing is the bat light. When citizens were in trouble, they would shine a giant bat-shaped spotlight over Gotham, and down would swoop their hero to save the day.

I join Susanna in sending out the bat light to you, moms. Our culture is in danger of losing sight of the family's value and the critical role only mothers can play. Our children are in danger of shouldering our anger, frustration, and bitterness if we can't choose to see them as God-given blessings. And we are in danger of missing an important mission the Lord has for us—to mother.

God has sent out the bat lights to parents for generations. If we look in His Word, we find countless calls to make teaching and living our faith out at home a high priority. When we look back through the pages of history, we see mommas, like Susanna, who didn't do it perfectly, but did make a difference by mothering with kingdom priorities in mind.

So let's hide under our aprons and then strap on our capes, moms. You can even slide into a pair of red boots if you'd like. But let's rise to God's calling to swim upstream by asking Him to shift our focus beyond the trivial tasks of motherhood and toward ways we can use every moment in our mothering journey to point others toward Him.

PS: Much of this post is taken from Erin's book Beyond Bath Time: Embracing Motherhood as a Sacred Role.

To learn more about Susanna, we recommend her biography Susanna Wesley and the Puritan Tradition in Methodism.

Duck and Cover for Quiet Time