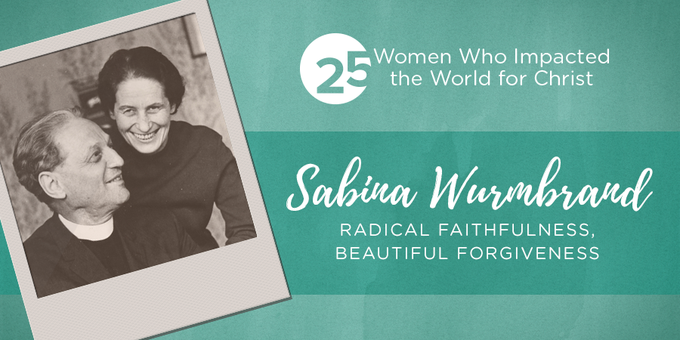 “I am Sergeant Harsh. Hard by name and hard by nature. Don’t you forget it.”

The female Soviet Guard introduced herself and barked out orders as other uniformed guards jostled the women prisoners about. The room was dark and overcrowded. Fear clung to the prisoners like the mold that threatened to overtake the damp concrete walls.

This was Jilava, the first of five Communist prison camps where Sabina Wurmbrand was held prisoner from 1950–1953.

Young Sabina was born in 1913 into an Orthodox Jewish home in Romania where to even mention the name of Christ was forbidden. As she matured into adulthood, Sabina "outgrew" her strict Jewish upbringing, considered herself a non-religious Jew, and chose to live a wild, immoral life through her teens and early twenties.

While visiting an uncle in Bucharest, Sabina met the tall, handsome Richard Wurmbrand and quickly fell in love with this Jewish young man. She impulsively moved to Bucharest in order to be near Richard, and the two were soon blissfully married on October 23, 1936. She hadn't believed her soon-to-be-husband when he warned her that she'd have no easy life with him, but she quickly discovered his prophetic words to be true.

Shortly after their wedding, Richard came down with tuberculosis, practically a death sentence in those days. It was during this severe illness that Richard began reading a New Testament that was given to him and came to see Christianity in a new light. It was not the repulsive, Jew-hating cult he had believed it to be.

As Richard's physical health strengthened, so did his understanding of the gospel. But while God was softening Richard's heart, Sabina became more resentful and anxious by the change she saw in her husband. On the day Richard went to be baptized, in desperation she determined she would kill herself.

But God had other plans for Sabina. As the symbol for the washing away of sin was being administered to her husband, God began a cleansing work in Sabina's own heart. No longer did she find pleasure in the wild parties and coarse lifestyle she had reveled in. She saw herself for who she truly was—a sinner in need of grace—and experienced firsthand the mercy and forgiveness of a loving Savior.

This display of forgiveness Sabina would remember and cling closely to for the remainder of her earthly pilgrimage.

Life as a Prisoner

In 1945, Romanian Communists seized power, and with them a million Russian troops were "welcomed" into the country. Richard Wurmbrand had gained a reputation for ministering to his oppressed countrymen during World War II—Jews and Gentiles alike—and for his bold preaching of the gospel as an ordained minister in the Lutheran Church. Because of this, the Communists watched him closely, and in 1948 he was arrested by the Secret Police, leaving Sabina alone to care for their ten-year-old son, Mihai.

Only two years after his arrest, Sabina found herself imprisoned for her faith as well, flung into horrific living conditions under harsh, manual labor. The prison camps were filled beyond capacity with thousands of other women of all backgrounds—nuns and prostitutes, gypsies and political activists, persons of nobility and thieves—all sharing bunks and refuse buckets.

And then there was Sabina, the pastor's wife—the lone, faint glimmer of hope inside those dark, dank cell walls. Though her body was held captive, her soul was still free, and it was clear to prisoners and guards alike that Sabina had something they did not. Her unexplainable peace and ability to extend love and forgiveness to her captors and cellmates baffled them.

Sabina used every opportunity to tell others about Christ, even at the risk of punishment and torture. She was indeed courageous and hopeful despite what she suffered. Still, her resilient faith did not exempt her from occasional bouts of discouragement or doubts.

Though she learned that Mihai was being cared for by a close friend, Richard did not fare so well. It was eight-and-a-half years before he was released in a general amnesty—three years after Sabina was set free—but was arrested a second time three years later to endure another six years of brutal treatment in underground prison cells or solitary confinement.

On more than one occasion, Sabina was tempted to give up hope on Richard altogether, to divorce him or consider him dead and move on with life, as many other prisoner's wives did. But God kept her safe and protected Sabina's heart as well as her marriage.

How grateful she was that she did not cave when, after seven long years with no word of Richard's whereabouts, she received a postcard in his handwriting which began with this line: "Time and distance quench a small love, but make a great love grow stronger."

After her husband was released for the second and final time, having endured fourteen years of extreme torture at the hands of brutal secret police, Sabina and her now grown son were joined by Richard in their work with the Underground Church.

These were intense times as the church met in secret in various locations. "We lived dangerously. And were never bored," Sabina writes in her autobiography, The Pastor's Wife. Every detail was well thought-out in advance: the place, the hour, the location, the password—everything. Even with these precautions, they were often caught by the secret police or betrayed by informers from within their own body. Those in attendance knew it was possible they'd never return home. For that reason, the ministers would preach as if it was their last sermon . . . because it well might be.

As friends and neighbors were whisked away by the police, Sabina discovered she was harboring a root of bitterness in her heart against the informers. It was hard for her to understand why those from within would turn in their own brothers.

After lying awake one night thinking about it, Sabina's eyes rested on a portrait of Christ hanging on the cross. She was reminded of one of Christ's last words before His death: "Father, forgive them, for they know not what they do." And then, "I thirst." It was then she realized the anger in her heart, and something within her changed that day. "How they thirsted, the betrayers, for forgiveness! Which I would not give them. Which in my bitterness I withheld." She resolved to show them love while expecting nothing in return.

A Voice for the Underground Church

In December of 1965, two Jewish Christian missions paid the $10,000 ransom to the Communist government that allowed the Wurmbrand family to escape Romania. Their journey west eventually led them to U.S. soil, away from the tyrannical rule and oppression of Communism.

But they did not forget the plight of their people. Out of this concern for persecuted believers, the Wurmbrands began a ministry now known as The Voice of the Martyrs, dedicated to raising awareness and serving the underground church.

During her time in prison, on nights when sleep evaded her, Sabina would pray for her fellow prisoners, for the millions of others suffering in the Communist world, and even for Christians in the West who were sleeping peacefully in their own warm, comfy beds. She could only hope that they in turn remembered to pray for suffering sisters like herself.

Her story should be an example to us all. It should cause us to pause and remember the persecuted believers in the world who at this very moment are sharing in Christ's sufferings.

"In prison," Richard relayed, "I saw men with fifty-pound chains at their feet, praying for America. But in America you seldom hear in a church a prayer for those in chains in Communist prisons."

What do we have to say for ourselves today? Are we living blindly to what's happening to our brothers and sisters around the world?

Not unlike other believers throughout history, Sabina's life was marked with intense suffering. She traversed valleys of deep pain and sailed through rough waters of fear and sorrow. But she is remembered and honored for her faithfulness to Jesus and the forgiveness she showed others. For even amidst the years of unsurmountable hardship, her heart continually reflected the love and compassion of her Savior.

Want to learn more about Sabina Wurmbrand? If so, we recommend reading her autobiography, The Pastor's Wife, or Tortured for Christ by her husband, Richard Wurmbrand.