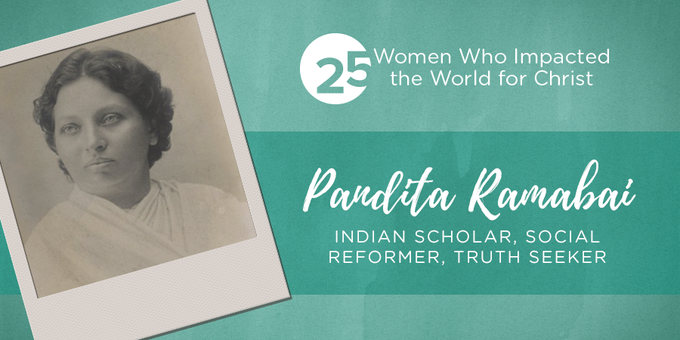 Born to high-caste Brahmin in India in 1858, Pandita Ramabai was fully immersed in orthodox Hindu religion from the outset.

Her father, though a strict Hindu, stood against religious protocol when he chose to teach his wife and children to read and write Sanskrit. Leaders labeled him a heretic. And Pandita began reading sacred Hindu religious writings at the age of eight.

Pandita's family earned a living according to Hindu religious practices: reading the Puranas (sacred Hindu texts) in prominent public places, where listeners—if they were truly religious—were expected to bestow gifts, such as flowers, garments, money, and food.

The Hindu religion was all Pandita and her family knew; they believed it was entirely sufficient for life and culturally proper according to their high caste. "We were not fit to do any other work to earn our livelihood, as we had grown up in perfect ignorance of anything outside the sacred literature of the Hindus," Pandita writes. "Our parents had unbounded faith in what the sacred books said. They encouraged us to look to the gods to get our support."

But soon the country's famine proved too powerful and left her family unable to earn anything through the religious works they so depended on. "At last, all the money which we had was spent, but the gods did not help us," she said. "We suffered from famine which we had brought upon ourselves." Pandita's father, mother, and sister died from starvation, leaving Pandita and her brother utterly destitute.

She and her brother became wanderers, traveling more than 4,000 miles on foot, bathing in rivers, and surviving on what food they were able to find. They continued to hope in the gods of their deeply rooted religious heritage, but time and again, they were left disillusioned and dissatisfied. "We had fulfilled all the conditions laid down in the sacred books, and kept all the rules as far as our knowledge went, but the gods were not pleased with us and did not appear to us."

Pandita's hope in Hindu gods began to grow cold. As her feet wandered through India, her defeated heart began to wander for spiritual truth.

Searching for Something That Would Satisfy

In 1878, Pandita and her brother were in Calcutta, where she encountered and studied other religions—an endeavor that caused her to become even more confused and more skeptical.

Her first encounter with Christianity was at a gathering she attended by invitation. Pitted against the lens of her Hindu religion, Christianity seemed to her a strange and almost off-putting practice. But she did notice that these Christians were kind, and a missionary gave her a Bible in Sanskrit. She thought the book was beautiful but found the teachings strange and different from anything she'd ever heard.

Pandita went on to study religious writings, driven both by scholarly pursuit and a thirst for teachings that would finally satisfy her instead of the disappointment her religious heritage had thus provided.

As a well-read woman, she found work in Calcutta and was asked to lecture women on their duties according to Hindu law. She delved into these studies, and the deeper she went, the more she discovered frustration, as well as grave hopelessness for Hindu women.

According to these teachings, a woman's only path for achieving liberation is through total abandonment to her husband. "She is to worship him with wholehearted devotion as the only god, to know and see no other pleasure in life except in the most degraded slavery to him," Pandita writes. It was through this intense dissatisfaction in her studies that God continued to slowly draw her to Himself.

"My eyes were being gradually opened; I was waking up to my own hopeless condition as a woman, and it was becoming clearer and clearer to me that I had no place anywhere as far as religious consolation was concerned. I became quite dissatisfied with myself. I wanted something more than [this religion] could give me, but I did not know what it was that I wanted."

All the ingrained detailed religious practices and worship had proven futile; the Hindu gods didn't come through when she needed it. Her religious studies, one after the next, were proving contradictory. And as a woman, she didn't see much hope for mercy or blessing in her future. So she kept searching.

At twenty-two, Pandita married—a Bengali man of lower caste—and then had a baby girl, but her husband died of cholera within the first two years of their marriage. "I was left alone to face the world with one baby in my arms."

Through her scholarly studies, she became connected with Christians and missionaries in India. She developed an interest in learning English, and she enjoyed the Christians' kindness, help, and teaching.

In 1883, Pandita traveled to England to study, and she lived with nuns who deeply invested in her life. She observed the women's rescue work, where she could hardly believe the kindness and mercy and love that was shown to sick, weak, and destitute women. In India, these poor people would have been considered outcasts, despised and degraded. No one would care to even look upon them. But through this mission's work, she began to taste and see the goodness of God's love for all people, including women.

Eager to know more, she asked the sisters to explain the motivation for this kind of compassion. She read about Jesus' encounter with the Samaritan woman at the well in John 4. "I had never read or heard anything like this in the religious books of the Hindus; I realized, after reading the fourth chapter of St. John's Gospel, that Christ was truly the Divine Saviour He claimed to be, and no one but He could transform and uplift the downtrodden womanhood of India and of every land. Thus my heart was drawn to the religion of Christ."

But Pandita had merely found a religion that satisfied her intellectually; she hadn't yet truly encountered Christ in saving faith. As a religious scholar so familiar with many religions, she was content with what she had discovered in Christianity, but it was eight years later that she truly recognized her sin and found her Savior in Jesus Christ.

"I am bound to tell as many men and women as possible that Christ Jesus came to save sinners like me," she writes. "He has saved me, praise the Lord!"

For God So Loved the World—The Whole World

Pandita's heart was radically changed, and so was her worldview. She came to believe the gospel is meant for everyone, available to anyone—a concept so foreign to her hierarchical Indian culture.

Men, women, and children are all cherished and precious in God's eyes. Jesus died for the whole world; there is no caste system in the kingdom of God. The untouchables, the unloved, the despised, the rejected—they're all created in God's image and unconditionally loved by a merciful Savior (John 3:16–21; Rom. 2:6-11; Col. 3:5–14; Titus 3:1–7). Jesus saves.

And it was this transformational heart change that led her to break chains in the caste system culture as she provided assistance to the abandoned and despised.

Pandita had been wishing that someone would engage in ministry to help these women in India-and God impressed upon her heart that it was her calling to help the poor and destitute. And this is a beautiful thing we should hope to emulate: A woman sensed a calling from God to help other women in her own sphere of influence, and she got to work in faith and obedience.

Mukti Mission serves women and children by providing food, clothing, housing, and education, regardless of caste. The ministry's mission statement is beautifully gospel-centered: "Christ-centered homes where destitute women and children—irrespective of their background—are accepted, cared for, transformed, and empowered to be salt and light in the society."

May we have Pandita Ramabai hearts—hearts that are so fulfilled by the saving power of Christ that we can't help but sing of His goodness. Hearts that make our spheres of influence our mission fields. Hearts that love others unconditionally, no matter their rank or position.

If you would like to learn more about Pandita Ramabai's life and work, we recommend her brief autobiography, " The Pandita Ramabai Story In Her Own Words."