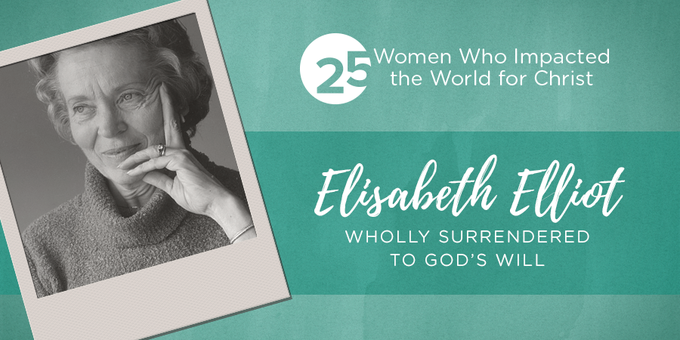 Do you ever long for a faith that's sold-out to God? A heart that is wholly surrendered to Him, that's willing to obey whatever He asks—even if you don't know the outcome?

This kind of faith does not just come in an instant. It's born out of a life consistently, faithfully given over to the will of Christ. And it's a faith that Elisabeth Elliot exemplified beautifully in her eighty-eight years on this earth.

I have one desire now: ­to live a life of reckless abandon for the Lord, putting all my energy and strength into it.

Recently, I have found myself pondering many questions as I study the life of this remarkable woman. Would I be willing to send my husband off into a remote jungle, knowing there was a good chance he would not return alive? Do I truly believe that he, and our children, are not mine but belong to my heavenly Father? Would I have enough faith to go to the very people who speared my husband to death, to live with them and forge community with them?

Her story is one I had not taken the time to dig into deeply until recently. Oh, how I wish I had become acquainted earlier with this heroic woman of God, a woman who wrote, "I have one desire now: ­to live a life of reckless abandon for the Lord, putting all my energy and strength into it."

The Shaping of Her Faith

Elisabeth was born in Brussels, Belgium, where her parents, Philip and Katherine Howard, were missionaries. Her family moved back to the United States when she was a baby and settled in Germantown, Pennsylvania, near Philadelphia. Elisabeth, fondly known as "Betty" to her family and friends, grew up in a godly, nurturing home. Over time, a seed grew in her heart to pursue missions work.

After high school, Elisabeth attended Wheaton College and decided to study classical Greek in order to fulfill her desire to do language translation on the mission field. She went on to complete post-graduate work at the Prairie Bible Institute in Alberta, Canada.

There, she met a godly woman named Katherine Cunningham who became one of the most important spiritual mentors of her life. Elisabeth wrote, "Many were the afternoons when Mrs. Cunningham poured tea for me and I poured my soul out to her. She herself was the message."

A Story of Love and Waiting on God

From her writings, it seems that Elisabeth was not of particular interest to the opposite sex. Therefore, the attention of her brother's friend,­ handsome, athletic, outgoing Jim Elliot,­ took her by surprise. It didn't take them long to realize they were attracted to each other, but Jim firmly believed God was calling him to live a life of singleness on the mission field.

So began several years of waiting to decipher God's direction for their relationship. During this time, they pursued missions separately. Both of these young people wanted to be sure marriage would not take them away from their individual devotion to God and His will.

Elisabeth wrote in her book Passion and Purity,

I do know that waiting on God requires the willingness to bear uncertainty, to carry within oneself the unanswered question, lifting the heart to God about it whenever it intrudes up one's thoughts. It's easy to talk oneself into a decision that has no permanence, ­easier sometimes than to wait patiently.

While Elisabeth pursued missions as a single woman, she and Jim continued to correspond with each other. In 1953, they grew sure God was calling them to pursue missions as a married couple and became engaged. They were married later that year in Quito, Ecuador, where they worked among the Quichua Indians. On February 27, 1955, their daughter, Valerie, was born.

Then in January 1956, Jim and four other men went on a daring mission to reach the remote Auca tribe with the gospel. All five of the young men were brutally murdered by several Auca men. What happened next, though, is not as widely known.

Elisabeth stayed firmly in place. God's call to South America was her call as well as her husband's, so she continued their work with the Quichua people. Eventually, she met two Auca women. Through them, she, two­-year-­old Valerie, and Rachel Saint (the sister of one of the other martyred missionaries) gained access to the tribe that had murdered her husband. Sensing it was God's will, Elisabeth and Valerie lived among them for two years. During this time, many were led to Christ—the outcome she and Jim had so greatly desired.

Elisabeth eventually returned to the United States and settled in New Hampshire. There she became a best­selling author, drawing heavily on her experiences in Ecuador. She also taught at Gordon­ Conwell College.

She married a professor at Gordon-Conwell named Addison H. Leitch who died of cancer in 1973. Elisabeth was once again a widow. Four years later, she met and married a hospital chaplain named Lars Gren, and they were married for the rest of her life.

In 1988, Elisabeth began her own radio program called Gateway To Joy. She opened each of her programs with these words, so very indicative of her trust in God: "You are loved with an everlasting love, that's what the Bible says, and underneath are the everlasting arms."

After thirteen years, Elisabeth retired from Gateway To Joy and passed the baton to a new program called Revive Our Hearts. Inspired by Elisabeth, faithful men and women came together seeking to minister to women as she had done-to remind them of the joy, purpose, contentment, and fulfillment they can have in Christ, no matter their circumstances. In a tribute to Elisabeth, Nancy DeMoss Wolgemuth wrote,

My own life and ministry stands on the shoulders of this remarkable woman of God. I don't know that any other author of our day has had a greater influence on my walk with the Lord.

Faithful to the End

For the last decade of her life, Elisabeth suffered from dementia and once again, a woman who had lived a life of daring surrender to God's will entrusted herself to His plan.

In an interview with Elisabeth and Lars, he said of her dementia, "She accepted those things [knowing] they were no surprise to God. It was something she would have rather not experienced, but she received it." Indeed, in an interview that lasted two hours, it was these words from Lars that got the sole reply from Elisabeth, a vigorous "yes" in agreement.

Elisabeth went home to be with her beloved Savior on June 15, 2015. Though the Christian community mourns the loss of a faithful saint, the message of her life has left an indelible imprint.

Reflecting on Elisabeth's life, I am reminded that mine is a safe life. A predictable life. I don't have to worry much about whether my husband will return home tonight. He isn't likely to be murdered in our suburban neighborhood. My children are not likely to grow up without a father. I have everything I need and more. Yet, when I read about Elisabeth Elliot, I consider what treasures I am missing. Heavenly treasures gleaned in the furnace of suffering and loss. Treasures that moth and rust cannot destroy.

As a wife, a mother, and a daughter of the King, I want to model the faithfulness of this woman who would not forsake the task God gave her and her husband, even when she had to complete it alone.

May I see the responsibilities of my life in just this way—as a gift and a privilege to be faithfully fulfilled. May I daily emulate this great and godly woman.

Want to learn more about the life of Elisabeth Elliot? We recommend: The Shaping of a Christian Family; Through Gates of Splendor; and The Savage, My Kinsman.

Previous Post The Tempting Apple of Ambition
Next Post Why Does My Husband Get to Be the Leader?

When Your Life Disappoints You