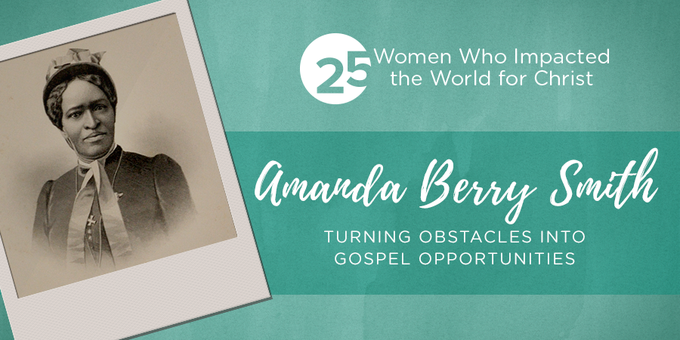 One day, a lady asked Amanda Berry Smith, "I know you cannot be white, but if you COULD be, would you not rather be white than black?"

Amanda answered, "No, no. As the Lord lives, I would rather be black and fully saved than to be white and not saved. . . . Yes, thank God, I am satisfied with my color."

For her, the experience of living as an African-American woman at the turn-of-the-century was tied directly into who she was as a Christian. In her autobiography she wrote,

I think some people would understand the quintessence of sanctifying grace if they could be black about twenty-four hours.

It's an interesting concept, isn't it, to think what might happen if we could "trade" something about ourselves. Amanda's comment strikes to my core. Am I wholly satisfied with who God created me to be? Am I able to see outward obstacles as an opportunity for sanctification?

A Resolution to Live for God

I had never heard the name of Amanda Berry Smith until I read her autobiography, an extraordinary humble offering of the life of an accomplished evangelist. Her story begins in 1837. Amanda grew up as the daughter of slaves and came to saving faith while working as a domestic servant at age thirteen.

While attending a revival meeting, Amanda sat in the very back row of the church. The female speaker's words moved her to tears. No one was more surprised than Amanda when she stopped, came to Amanda's side, and put her arm around the young girl. The woman began to pray. "Oh, how she prayed," Amanda said. "I was ignorant, but I prayed as best I could."

Amanda resolved to live for God. At age seventeen, she married Alvin Devine. The couple had two children, but the first one died. When the Civil War began, Amanda's husband enlisted and would never return. A young mother, she soon married again. The couple moved to New York where her second husband, James, worked at a hotel and Amanda served as a cook in a private household. They could not afford to live together.

Out of Amanda's five children, only one would survive. Her second husband died of stomach cancer. So at age twenty-nine, she found herself twice widowed and a single mother, hiring herself out as domestic help. For many years her days consisted of washing endless piles of dishes, scrubbing laundry, and cleaning floors.

In the midst of many lonely days, she prayed hard and followed faithfully. Her resolute spirit is reflected in this beautiful statement. Amanda writes:

I found out that it was not necessary to be a nun or be isolated away off in some deep retirement to have communion with Jesus; but, though your hands are employed in doing your daily business; it is no bar to the soul's communion with Jesus. Many times over my wash-tub and ironing table, and while making my bed and sweeping my house and washing my dishes, I have had some of the richest blessings.

Still, she probably never imagined how God would use this young, widowed African-American mother with barely $2 to her name. An invitation to a camp meeting changed the direction of her life.

From 1869 to 1878, Amanda would teach God's Word throughout the southeastern United States. It was during this time that she adapted her signature style—a simple, Quaker bonnet and dress. It was her intent to be single-minded and focus on what God would have her to do, not on her outward appearance.

Following the end of slavery, Amanda was invited to travel to England, India, and Liberia:

Since then, I have been a widow, and have traveled halfway round the world, and God has ever been faithful. He has never left me a moment; but in all these years I have proved the word true, "Lo, I am with you always, even to the end."

Much to her amazement, Amanda spent the next eight years in West Africa traveling by canoe from village to village, teaching God's Word and speaking out on behalf of oppressed women and children. Their needs were emotionally overwhelming, but she saw God work miracles through friends who would send unexpected checks to meet specific needs at the precise hour required.

She wrote of those days, "How often I have stood still and seen God overrule the things of man's device and work His sovereign will."

In 1891, Amanda returned to the United States to settle in Chicago. She served as a speaker for the women's temperance movement. And, at the urging of a friend, she wrote her autobiography, a beautiful testament to a life lived wholly for God.

A Reflection of Her Savior

I was struck by Amanda's story, not just because of what she accomplished, but by her humble attitude that consistently turned the focus away from herself and her own situation and onto God.

In 1893, Amanda was named as a National Evangelist in the Women's Christian Temperance Union. She used that influence to build an orphanage in Chicago to care for destitute African-American children.

Amanda Berry Smith began life in slavery, but she refused to see oppression as a liability. Instead, through years of difficult marriages, child loss, servitude, and prejudice, she pressed on. Her story encourages me, and I hope you as well, to refuse to see your obstacles—no matter how daunting—as liabilities. Instead, like Amanda, we can ask ourselves, How is God using each characteristic in my life as an opportunity for sanctification?

It is only then that we will reflect the image of our Savior.

Amanda was once called "God's image carved in ebony." I'm sure she would have loved that compliment, to be thought of not as a freed slave or even as a beautiful, dignified, and brave African-American woman. Instead, she was known as a woman who wholeheartedly reflected the image of the God she had so faithfully served.