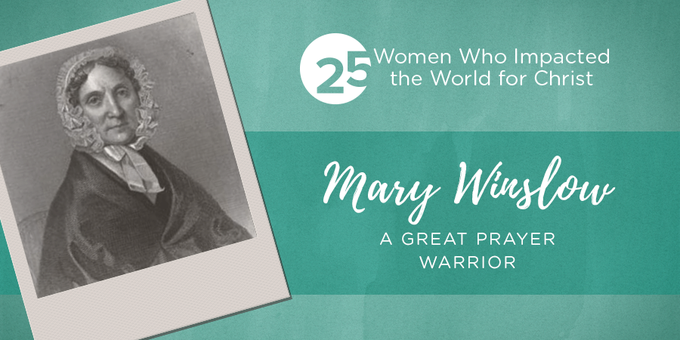 The day the telegraph arrived was a day forever etched in the mind of Mary Winslow. Having recently arrived in New York with her ten children, while awaiting the arrival of her husband, the Winslow's infant daughter died a sudden and unexpected death. Before this child was even buried, Mary received the devastating word of her husband's death. "At the very moment I was weeping over the corpse of a darling child," Mary wrote in a letter, "I received the intelligence that a still heavier calamity had befallen me, and that God had written me a widow indeed!"

Mary Forbes was born in 1774 to Dr. and Mrs. Forbes. Miraculously on several occasions during her childhood, her life was spared. One time, while accompanying her parents on a voyage, a terrible storm bore down on their vessel. As she and her mother sought a place of safety below deck, Mary noticed that a small piece of lighted candle wick was almost burnt to the bottom of the candle.

Fearing that the barrel on which it was setting would begin to burn, she jumped from her mother's lap and quickly removed it. Only then did her mother (who was so absorbed in their impending doom) realize that the barrel about to be ignited was a cask of gunpowder. Recalling this event years later, Mary said, "Had I not removed it at that moment, the vessel and all on board must instantly have been blown to atoms."

An only child, Mary married Lieutenant Thomas Winslow at the age of seventeen. Together, the Winslows had everything that could be desired. One night, after returning home from a ball, Mary lay in bed thinking about "the glitter, the music, the dance, the excitement, the attention, and the pleasure." With a heavy heart she whispered to herself, "Is this all?" It was then that she came under spiritual conviction and found deliverance while pleading the promise, "Ask and ye shall receive." Graciously, the Lord used these words, "I am thy salvation" to bring redemption to her soul.

Now in a strange land, grieving the loss of a child as well as her beloved husband, Mary nearly sank beneath her load of suffering. How was she to raise such a large family alone? The weight of the souls of her eight sons and one remaining daughter continually rested upon her shoulders until one night when she could not bear the load anymore.

Years later, she recounted the events of that night to her children:

One whole night I passed in wrestling prayer—a night ever, ever memorable. All in the house but your widowed mother were asleep. I paced my room in wrestling supplication for help and comfort from him who alone could impart it. In vain I sought to grasp a divine promise; all seemed enshrouded in the deepest gloom. Thus was that night of woe spent, the dawn of the day finding me still wrestling with God.

It was then a voice spake to my innermost soul, so blessed I could not mistake it. Its promise was so divine, its comfort so real, its assurance so explicit, I was left in no doubt whose voice it was. "I will be a Father to thy children," were the words spoken. I felt in an instant that God was with me—with me in my room. I felt assured that God had seen my sorrow, and had bowed the heavens and come down Himself to comfort it. I arose and fell upon my knees, and in adoring gratitude poured out my heart before Him. My room, before a scene of deepest anguish, was now the very gate of heaven to my soul. I felt assured that God would not only be a Father to my fatherless ones but also a Husband to their widowed mother.

From that day forward her heavenly Father became her husband and friend. "I would not often tell the dearest friend in the world what passes in my mind; but I can disclose it all to Jesus!" Mary would often say.

As soon as any trouble would arise, Mary would fall on her knees and pour out her heart to her heavenly Father.

This wonderful promise also gave Mary a renewed zeal as she daily instructed her nine children. Gathering them around her, morning and evening, she spoke of God's faithfulness and care, imploring them to put God first in their life.

Pen of a Ready Writer

Little did Mary realize that the great trials that she had endured throughout her young life were a means of the Lord grooming her for a life of service. Her pen became a means of medicine for many a soul as she was given much insight to minister to the needs of others. Whether a word of rebuke or sweet drops of encouragement to a discouraged friend, Mary poured out her life ministering to all she came in contact with.

To a new Christian she writes, "Now you are called to glorify Him in body, soul, and spirit. You belong not to yourself, but to Jesus. Say to Him, 'Lord, what wilt thou have me to do?'"

To one going through a trial she pens, "Dear friend, make much of your trials—they are treasures and blessings in disguise—they quicken to prayer. Pray in the trial, pray over the trial, and pray after the trial, that you may not lose the good it is designed to impart."

To a brother in need: "Temptation is a test, tribulation is a discipline, trial is a school, all essential to our perfect education for eternity."

To another she comforts, "When anything tries me, and my heart sinks, the moment I think of God the burden is either lightened or removed. And when trouble comes, small or great, we then shelter beneath His wings, or nestle within His bosom, and feel the very throbbings of His heart."

To a friend she exhorts, "Confession of sin is one of the holiest and healthiest exercises of the renewed soul. To go to Jesus conscious of failure in thought, word, and deed is our precious privilege. Ten minutes at the feet of Jesus, in a full view of His love, while confessing sins and shortcoming—sins we know already pardoned—yet sorrowing that we should ever grieve One who so tenderly loves us, is a happiness I would not exchange for millions of worlds."

What a treasure of writings we have because Mary used the talents God gave her. In reading her letters, woman today are drawn closer to Christ being inspired to follow after the footsteps of this dear sister. She fulfilled her duty as mother and teacher to her children, while also profoundly impacting thousands of lives. What a high calling we also have to use the talents we are given!

Are we "blooming where we are planted"? Instead of bitterness with the lot the Lord gave Mary, she turned her trials into pleading and then resting on God's promises. "We cannot ask too much," she says. "Ask anything in my name, and I will do it. There He sits to fulfill His own promise; and the oftener we go to Him, the more welcome we are."

All of Mary's nine children came to faith in the Lord; three became ministers of the gospel. As Mary reached her final days on this earth, she still tried to continue her correspondence. In her last letter written, she wrote:

Oh, dear young friend, I have been very ill; my happy home almost in sight! Make Jesus your chief FRIEND, and look more to the things that are not seen and eternal. I can write no more, sitting in bed supported by pillows. Make sure of heaven. You may make many mistakes as it respects this poor world, but, I beseech you, make no mistake as it respects a vast eternity.

So Mary entered her last days on earth. Some of her last recorded words are a resonance of her life on earth: "Keep close intimacies with Jesus. We must live upon Christ, and we must die upon Christ."

Read more from Mary Winslow and many other godly women in Donna's book, Seasons of the Heart: A Year of Devotions from One Generation of Women to Another. Log on to the giveaway widget below for a chance to win one of three copies.