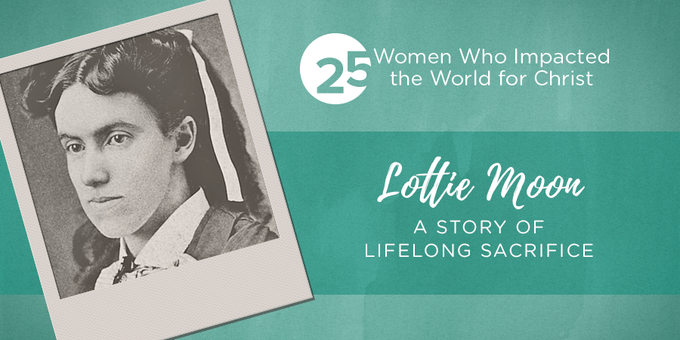 Every little girl closes her eyes and wistfully dreams of what her life will be like someday. She might have visions of a beautiful wedding, a groom to meet her at the altar . . . a family to take care of and a house to call her own.

All of these dreamy ideas are completely normal.

Yet God's ways are higher than our ways . . . and sometimes God's plans are anything but typical.

Such was the life of Lottie Moon, revered by many for a lifetime of service to Christ and for pioneering a missions movement that still goes on to this day.

Charlotte Digges "Lottie" Moon was born December 12, 1840 in Virginia. Lottie was the daughter of a well-to-do, strong Christian family. In 1854, Lottie attended Albemarle Female Institute in Virginia; afterward she went onto Hollins University, graduating in 1861. While in college, Lottie held the highest grades of anyone in her class and was one of the first southern women to receive a master's degree.

Her Conversion to Christ

In 1858, Lottie gave her life to Christ after hearing the gospel at a series of revival meetings. Jesus was now her Savior, but she had no idea how much her life was going to change because of Him.

After college, Lottie pursued her passion and became a schoolteacher for girls in Danville, Kentucky. Later on, she and a friend started a new school in the city of Cartersville, Georgia. Lottie was a well-educated and intelligent go-getter of her time. Yet even as she was enjoying success in her chosen field, a yearning began to stir in her heart for something different and bigger than all her plans.

In 1872, Lottie's sister Edmonia "Eddie" Moon went to China as a Southern Baptist missionary. Eddie wrote letters back home expressing the dire, spiritual need in China and how desperate they were for more missionaries. Lottie was deeply touched by her sister's letters. While listening to a sermon on John 4:23, she felt an undeniable conviction from God. From that point on, China was Lottie's "white field" to harvest for Christ.

In 1873, at age thirty-two, Lottie sailed for China leaving behind her family and her beloved school, as well as a broken engagement. She ended the relationship due to differing beliefs she and her fiancé held as to the authority of the Bible and felt the call to serve Christ wholeheartedly on the mission field.

What is your white field to harvest? Your family? Your neighbors? Kids or teenagers at church? Ask to Lord to renew your heart with passion for them!

Winning the Chinese with Love

After arriving in China, Lottie returned to teaching school for thirteen years. She learned what the apostle Paul meant in 1 Corinthians 9:20 when he "became a Jew" in order to win those who were under the Law. Lottie realized the false spiritual beliefs and oppression of the Chinese people, so she learned their language and studied the country's history. She even began to dress like them! Even though she encountered suspicions and prejudices among the Chinese people, this didn't discourage her. She was simply more determined to love them.

Lottie became a friend and helper to many in the villages, meeting their physical and emotional needs. She was known for her ministry to the Chinese women. As she gained the trust of the Chinese, her popularity grew, and it wasn't uncommon for people to walk many miles to hear the teacher who "knew the Words of Life."

Do you genuinely love people who are different than you? Have you gone the extra mile to learn what their life is like?

In 1885, at age forty-five, Lottie gave up teaching and became a full-time missionary in the cities of P'ingtu and Tengchow, China. She established a new church; then an ordained minister began preaching, and the gospel started spreading. More than a thousand souls came to Christ, and P'ingtu became known for the evangelism of the gospel in China.

It was while serving in P'ingtu that Lottie noticed how shy the Chinese children were. Desiring to build a relationship with them, she started baking cookies. Of course the children loved these treats! As her connection with the children grew, this helped Lottie meet their mothers, and she was delighted to share Christ with them.

Lottie persevered through much human suffering to advance the cause of Christ. She endured serving for decades through the plague, smallpox, and the threat of persecution. While born into a life of financial blessing, Lottie learned in China to graciously make do on very little.

What gifts, talents, or possessions do you have that God could use to reach people with the gospel? Ask the Lord to open your eyes to the possibilities.

A Master of Correspondence

While serving in China, Lottie became an advocate who wrote many letters back to the United States to her fellow Southern Baptists. Lottie's letters were firm in their tone that Southern Baptists of her day were not doing enough for the sake of the gospel mission. Her charge was always more sacrifice, more prayer, and the need of more missionaries.

Lottie's passion for Christ shone in her many letters:

The needs of these people press upon my soul, and I cannot be silent. It is grievous to think of these human souls going down to death without even one opportunity of hearing the name of Jesus. (November 11, 1878, P'ingtu)

Why should we not . . . instead of the paltry offerings we make, do something that will prove that we are really in earnest in claiming to be followers of him who, though he was rich, for our sake became poor? (September 15, 1887, Tungchow)

Let us not be silent when souls are dying and going to hell. Lord, give us boldness to proclaim truth and give us courage to inspire others to do Your work.

Because of Lottie's eloquent pleas, a special offering was taken in 1881 by her childhood church, Cartersville Baptist Church. By 1888, Southern Baptist women had collected $3,315 to send more missionaries to China. In 1918, the WMU (Woman's Missionary Union) named the annual offering after Lottie Moon. Today, Lottie's gospel focus continues, and this offering represents fifty percent of the International Mission Board budget.

Are you vocal about the spiritual needs around you? Are there social issues where more Christian voices are needed? Pray for the courage to speak up for others.

End of a Ministry . . . Beginning of a Legacy

Lottie Moon served selflessly and considered the needs of the Chinese people as greater than her own. She was known to make great sacrifices for the sake of those who were suffering. She would readily give her own food away and once sent her entire savings to her Chinese friends in P'ingtu who were suffering from famine.

In 1912, a very frail Lottie, suffering with an acute health problem, was ordered by her doctor to head back to the United States for rest and medical care. Four days into the journey, she died on the ship before reaching San Francisco.

The missionary who had bridged a cultural gap to the lost people of China using her life and homemade cookies was gone. Lottie Moon truly gave all to Christ and the people of China. Many years prior to her death, she said, "I would that I had a thousand lives that I might give them to the women of China."

What time can you give the Master today? What worshipful service could you offer to Him? What gift could you lay back at Christ's feet?

Lottie's story is a vivid reminder that God can use anything, even something as small as a cookie, to show love and build relationships for the sake of the gospel. (Lottie's original tea cake recipe can be found here.)

If you'd like to learn more about the life of Lottie Moon, we recommend the book Send the Light.

Previous Post When My Work Is Marginalized, Unappreciated, or Belittled
Next Post 7 Unchanging Truths in Light of Unreliable Politics