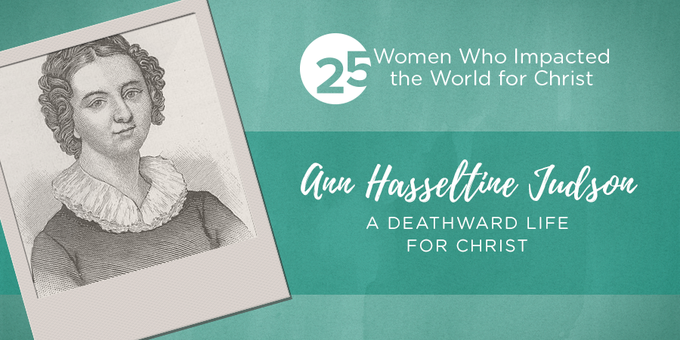 We huddled around our kitchen table, my two oldest sons and I, while the snow fell in the north woods of Michigan. A fire crackled in the woodstove, a welcome reprieve from the 209 inches of snow that had fallen as of February that year. While my two younger sons napped, the bigger boys and I were transported far from our little home in the woods to a land in stark contrast to our snowy surroundings.

It was hot. It was hostile. It was Burma, and we were visiting Adoniram Judson through the pages of Adoniram Judson: God's Man in Burma as a part of our homeschooling curriculum.

That was eight years ago, and this winter I've been transported once again, this time from my home in frigid Minnesota to Burma's distant, foreign shores. While first we visited Adoniram, this time I aimed to become acquainted with Ann through the pages of Sharon James' biography, Ann Judson: A Missionary Life for Burma.

All those years ago, my boys found a hero in Adoniram—a rock-solid man of the faith who persevered through countless obstacles, eventually giving his life to bring the gospel to Burma (now Myanmar). In these weeks with Ann, I've met a heroine. Yes, but what's more, I've found a friend—a Hebrews 11-quality sister in the faith.

She has blazed a trail to follow marked with devotion to Christ, love for her husband, and passion for people at every turn. But where did it all begin? How did this young girl go from nineteenth century New England socialite to missionary pioneer? I'd like to introduce you to my friend Ann. It's tempting to list a slew of facts and dates—an autopilot introduction of sorts. But as I've gotten to know Mrs. Judson, I've found that the way to her heart is through her words, many of which have been wonderfully archived in the book mentioned above. Here, dear friends, is Ann Hasseltine Judson.

"I was early taught by my mother," Ann writes, on the early years of her life, " . . . the importance of abstaining from the vices to which children are liable. . . . She also taught me, that if I were a good child, I should at death, escape that dreadful hell, the thought of which sometimes filled me with alarm and terror. I therefore made it a matter of conscience to avoid the above-mentioned sins, to say my prayers night and morning, and to abstain from my usual play on the Sabbath, not doubting that such a course of conduct would ensure my salvation."

Believing that "being good" secured her entrance to heaven, Ann enjoyed a blissful childhood, coddled by her loving family in Bradford, Massachusetts. The Hasseltine home was quite the center of social activity, and Ann's teen years were dotted by attending an abundance of balls and parties.

Having abandoned the religious inclinations of her childhood, Ann later remarked that in her teen years, she was "rapidly verging toward eternal ruin. . . . I was surrounded with associates, wild and volatile like myself, and often thought myself one of the happiest creatures on earth."

But God, not content to leave Ann in her vain "happiness," was about to take hold of her heart. After a period of months of vacillating between pleasure and guilt, good works and sin, Ann found herself here, where so many stories of new life begin:

I felt myself to be a poor lost sinner, destitute of every thing to recommend myself to the divine favour; that I was, by nature, inclined to every evil way; and that it had been the mere sovereign, restraining mercy of God, not my own goodness, which had kept me from committing the most flagrant crimes. This view of myself humbled me in the dust, melted me into sorrow and contrition for my sins, induced me to lay my soul at the feet of Christ, and plead his merits alone, as the ground of my acceptance.

Ann was, indeed, captured by her conversion. "Redeeming love . . . was now her theme," a friend remarked. "One might spend days with her without hearing any other subject reverted to." It was likely exactly that quality that caused burgeoning missionary Adoniram Judson to take notice of Ann at a celebratory meal at her home on the very day of his commissioning to missions by the Congregational Church. Scarcely a month later, Mr. Judson wrote a letter to his future father-in-law asking whether he could "consent to part with [his] daughter early next spring, to see her no more in this world."

Adoniram had counted the cost of his mission and had itemized its risks for his dear friend and her parents. Mr. and Mrs. Hasseltine left the decision up to Ann. After much deliberating, she penned this response:

O, if he [Christ] will condescend to make me useful in promoting his kingdom, I care not where I perform his work, nor how hard it be. Behold the handmaid of the Lord; be it unto me according to thy word.

The Marriage, The Mission

Adoniram and Ann were married on February 5, 1812. That same day, a farewell service was held for the Judsons and their newlywed friends, fellow missionaries Samuel and Harriet Newell. Stepping out in faith that day, Ann commenced a journey that she was confident would end in death. On February 22, en route to Calcutta, she wrote:

O for a heart to live near to God, and serve him faithfully. I need nothing so much as ardent piety. I should feel happy in the consideration of having left my native land, and my father's house, if by making this sacrifice, the kingdom of Christ would be promoted. May it be my great object to live a useful, holy life, and prepare to die a peaceful death.

Ann would spend the remainder of her years doing just that. To detail the scope and importance of the Judsons' ministry in the space I have here is an impossible task—an attempt to paint a masterpiece with one feeble stroke of the brush. But in the brief fourteen years that the sovereign Lord allowed, Ann accomplished a great deal:

All this she accomplished while under terrible strain, enduring the gravest conditions. She suffered nearly constant serious illness (including spotted fever and smallpox) from the day they set sea to the moment she died. Ann endured the heart-wrenching loss of two children, with the third outliving her by just six months. She faced long periods of separation from her beloved "Mr. J," and though she did see her American family once more while seeking medical treatment in the United States, she willingly gave them up, as well as every earthly comfort to return to the work in Burma. Yet in one of her last letters she wrote to a friend, "Oh! How much we owe to that kind Being who has mingled mercy with all our afflictions." She had counted the cost and was ready to pay the price for Christ, for her husband, for Burma.

And pay the price she did. Ann died on October 24, 1826 at the age of thirty-seven after becoming ill with another bout of spotted fever, a "tropical illness" now known as cerebral spinal meningitis. Adoniram endured a period of deep depression following Ann's death, but went on to minister in Burma for another twenty-four years before his death in 1850. During that time, he married and buried two more wives, Sarah and Emily, each of whom had been inspired to pursue missions by reading the writings of her heroine: Mrs. Ann Hasseltine Judson.

The Trail She Blazed

Well, we've been introduced to our dear sister in the faith, but we've barely scratched the surface of her grace-drenched story. I cannot encourage you enough to read the details of the work of Ann and Adoniram in Burma. And as we do, let's be watching for what we can glean from the harvest of her labors.

I close with this, an excerpt from Ann's plea, her "Address to Females in America." My prayer is that we would live our mission with a fervor that would honor this great heroine of the faith and her Lord:

Shall we sit down in indolence and ease, indulge in all the luxuries with which we are surrounded, and which our country so bountifully affords, and leave beings like these, flesh and blood, intellect and feeling, like ourselves, and of our own sex, to perish, to sink into eternal misery? No! By all the tender feelings of which the female mind is susceptible, by all the privileges and blessings resulting from the cultivation and expansion of the human mind, by our duty to God and our fellow creatures, and by the blood and groans of Him who died on Calvary, let us make a united effort, let us call on all, old and young in the circle of our acquaintance, to join us in attempting to meliorate the situation, to instruct, to enlighten, and save females in the Eastern world; and though time and circumstances should prove that our united exertions have been ineffectual, we shall escape at death that bitter thought, that Burman females have been lost, without an effort of ours to prevent their ruin.

Now is the time for us to count the cost! Are we willing to pay the price to bring the message of the gospel and of biblical womanhood to the women in our "mission field"? Oh, may it be so!

Want to learn more about the life of Ann Judson? We recommend the biography Ann Judson: A Missionary Life for Burma by Sharon James.

How Few There are Who Die So Hard!: Suffering and Success in the Life of Adoniram Judson: The Cost of Bringing Christ to Burma

Full Text of Ann of Ava