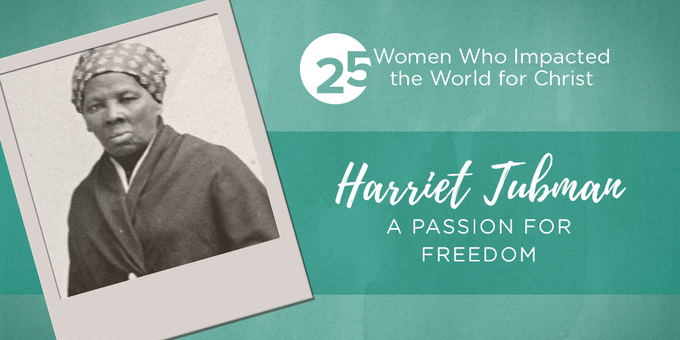 A leader of the Underground Railroad . . . following the North Star . . . traveling at night through forests and swamps, all the while eluding hounds and slave catchers with danger at every turn.

This version of Harriet Tubman's life, gleaned from my memories of elementary school, is really just a small picture of an amazing woman—a former slave who endured vicious mistreatment from the hands of her masters, who escaped to freedom only to go back into the heart of danger time and time again to help others. Although she never learned to read, she influenced politicians, leaders of both the abolitionist and suffrage movements, as well as generals of war. And even after slavery and the Civil War ended, she continued to fight for the rights of her people and care for those in need.

Life as a Slave

Harriet Tubman was born Araminta Ross somewhere around 1820 in Dorchester County, Maryland. The exact year and location of her birthplace is unknown, as was the case for most slaves. Araminta's parents, Harriet Green and Ben Ross, were slaves during a time when slavery was deeply entrenched in the culture. Araminta may have been one of eleven children, falling somewhere in the middle.

Araminta, or "Minty" as her parents called her, had only the bare necessities—if even that—as a child. Her work began as a slave at just five years old when she was hired out to a neighbor. During the day, she had a full load of domestic tasks and cared for a baby. At night, she was to keep the baby from disturbing the master and mistress. When the baby cried out, the mother got up, not to go to the child, but to whip Araminta as punishment. If she didn't do well enough at her household tasks during the day, she was punished. One day, she could remember being whipped five times before breakfast.

Sometime when she was a teenager, Araminta tried to block the way of an angry overseer who was pursuing another slave. The overseer picked up a two-pound lead weight and threw it at the other slave—hitting Araminta in the head instead. Although she recovered, for the rest of her life she had a condition (possibly narcolepsy) where she would fall asleep without notice.

In 1844 when she was just nineteen, Araminta married John Tubman, a free black man. It was at this time that she changed her name to Harriet, in honor of her mother. Although her husband was free, Harriet was still a slave—as would be any of the children born to them. After five years of marriage, there were no children, and Harriet longed to flee to the north and freedom—a desire her husband did not share.

Harriet had a deep faith in God, something most likely instilled by her parents. Although she was illiterate, she had heard Bible stories and verses spoken to her by her mother, which laid a spiritual foundation that stuck with her throughout her life. Harriet began to pray for her master to become a Christian so he would set her and her family free. But when she heard a rumor that he was going to sell her down the river, her prayers changed: "Lord, if you ain't never going to change that man's heart, kill him, Lord, and take him out of the way so he won't do any more mischief."1

Not long after, her master died, and Harriet felt intense guilt. But she also experienced a turning point. She realized she needed to take an active role in God's plan for her life rather than just relying on others. She was going to escape!

In the fall of 1849, Harriet headed north, utilizing the resources of the Underground Railroad (UGRR), passing coded messages and staying at safe houses along the way. While her husband refused to accompany her, two of her brothers joined her for a while before deciding to turn back. But Harriet kept on. She would move at night and rest during the day, making most of her ninety-mile journey on foot. She headed for Philadelphia, which had a large community of free blacks, most likely supporting herself with some kind of domestic work. Although she had found the freedom she had sought, she was lonely for her family. After one year, she faced another turning point—one that would make her famous.

Life as a Conductor

Somehow, Harriet's family was able to send her a message letting her know that her niece and two little girls were about to be sold into the deep South. She felt a tug between her freedom in the North and her desire to help her family experience this freedom, too. But then she felt impressed by God: "It's you I want, Harriet Tubman."2 That reliance on her heavenly Father for wisdom, guidance, and strength was a thread that ran throughout the rest of her life. "I always told God," she said, "I'm going to hold steady on you, an' you've got to see me through."3

Harriet risked her life and safety over and over again as she traveled back into Maryland to free her niece, brothers, parents, and other slaves. When she attempted to go back for her husband, she discovered he had taken another wife. Although deeply hurt, she focused her life's mission on being a conductor on the UGRR, helping fugitive slaves escape, taking many of them all the way to Canada.

Harriet became one of the most famous conductors of the UGRR, nicknamed "Moses" for leading her people to freedom. From 1852, Harriet made at least one trip a year into slave territory, where she helped at least ten fugitives at a time escape. Although her actions made slave owners and slave catchers angry (and put a price on her head), she and those she helped escape were never captured. Many years after the Civil War had ended, Harriet boasted:

I was conductor of the Underground Railroad for eight years, and I can say what most conductors can't say—I never ran my train off the track and I never lost a passenger.4

Harriet was fearless in her rescue missions. Thomas Garrett, an abolitionist and leader of the UGRR, said to a friend, "Harriet seems to have a special angel to guard her on her journey of mercy . . . and confidence [that] God will preserve her from harm in all her perilous journey."5

Harriet did have many "close calls" on her rescue missions from patrols looking for runaway slaves and even former masters or people she knew from her days as a slave. But she had faith in God and always asked Him what to do and to direct her, "which," she said, "He always did."6

Exactly how many slaves Harriet rescued is unknown, but the number is often described as hundreds. In addition to her rescue missions, she often spoke to groups at abolitionist meetings, raising money for her cause. She was a captivating speaker holding audiences—both white and black—enthralled.

With the advent of the Civil War, Harriet took on a new role in her fight for freedom. Not only did she work as a laundress, nurse, and an armed scout and spy for the Union Army, she helped freed slaves adjust to their new lives, often using her own limited funds to do so.

When the war ended, Harriet settled in Auburn, New York, and again devoted herself to helping others. Her good friend William H. Seward (a Senator and former Secretary of State) sold her a plot of land outside of town, where she created a home for her family members and welcomed others in need. She campaigned for the women's suffrage movement and sought donations for orphans, the elderly, and disabled veterans.

One of the people Harriet took into her household was Nelson Davis, a war veteran and former slave, who suffered from tuberculosis. Around this time, Harriet learned that John Tubman had been killed in a violent argument with another man. Now that she was a widow in the eyes of God, she was free to remarry. On March 18, 1869, Harriet and Nelson Davis were married in Auburn. Nelson was only twenty-five years old, with Harriet being at least twenty years his senior. They were happily married for almost twenty years before Nelson died.

Throughout her life as a free woman, Harriet always struggled financially. While she worked to raise funds to support others, she didn't seek money for herself. Once when she asked Seward for a donation to help southern freedmen, he responded, "You have worked for others long enough. . . . If you ask for a donation for yourself, I will give it to you, but I will not help you to rob yourself for others."7

In 1903, Harriet donated some of her land to the African Methodist Episcopal Church in Auburn. It was on this site that the Harriet Tubman Home For the Aged opened in 1908. Eventually, Harriet herself had to enter the facility when her health declined. On March 10, 1913, surrounded by family and friends, she died of pneumonia.

Harriet Tubman's life should be an example and inspiration to us all. Not content to enjoy freedom for only herself, she worked tirelessly to help others escape their own bondage. Even after the end of slavery, she continued to work for the benefit of others until she could physically do so no more.

Are we just as passionate about the freedom we have in Christ that we're not content to keep it to ourselves? How can we help others escape their bondage and find the freedom our heavenly Father longs for us to have?

Want to learn more about the life of Harriet Tubman? We recommend the biography Harriet Tubman: The Road to Freedom by Catherine Clinton.