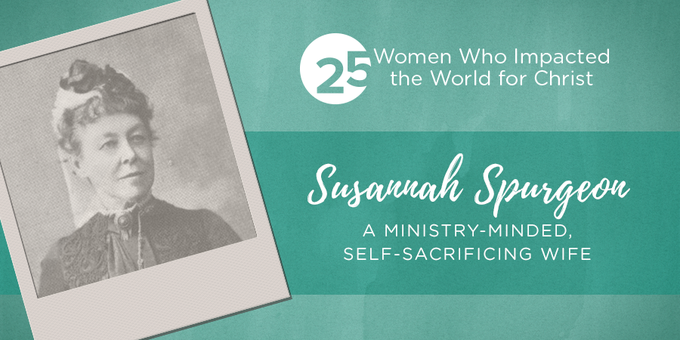 As my husband pursued a second job opportunity last summer, our routine and pace of life was subtly altered, yet changed just enough to send me into an emotional tailspin. How do I cope with less time with him? How do I combat the fears I face that his vocational life will eclipse our family life? Is it even possible to have a good marriage when I have less control over my husband's schedule than I would like?

All of these questions plagued my thinking for the better part of a year, as I realized the depth of my desire to control my husband and slowly learned to submit his life to the Lord, as I do my own.

And so it was fitting that I began reading an account of Susannah Spurgeon, the woman affectionately known as "wifey" to Charles Haddon Spurgeon, history's "Prince of Preachers." Though much is known about Charles, less is known about his faithful wife, who was the quiet strength behind his successful ministry.

Susannah was born in London, England in 1832. Her parents were committed believers and raised her in a godly and disciplined home. Susannah attended New Park Street Chapel, where she described the pastor as "a quaint and rugged preacher, but one well versed in the blessed art of bringing souls to Christ." It was under such weekly instruction that Susannah grew into a young woman of tremendous virtue and integrity.

And it was during the preaching of God's Word one Sunday that a teenaged Susannah became aware of her own need for a personal faith in the Lord. "From that service," she later remarked, "I date the dawning of the true light in my soul. The Lord said to me, through his servant, 'Give me thy heart,' and constrained by His love, that night witnessed my solemn resolution of entire surrender to Himself." It was this spirit of surrender that would characterize Susannah's entire life going forward.

In 1853, when Susannah was twenty-one years old, she first met Charles. At the time of their meeting, Charles was a simple country preacher and not yet well known. Susannah admitted that at first glance she thought her future husband to be awkward, with "long, badly-trimmed hair." And yet slowly, the two began to form a friendship marked by long and intense spiritual discussion.

Though Susannah considered herself to be less spiritually mature than Charles, she possessed tremendous spiritual discernment and her insightful nature became a refuge for his thoughts. After Charles finally proposed in 1854, Susannah remarked, "If I had know then how good he was and how great he would become, I should have been overwhelmed, not so much with the happiness of being his, as with the responsibility which such a position would entail." But God who sees all had slowly been working His grace into Susannah's life and heart, preparing her for a life of quiet service alongside one of history's best-known men.

It didn't take long for Charles to become the greatest preacher in the England of his time, due to a manner of preaching that was heartfelt, dynamic, and widely-appealing. He was sought after constantly and spent Sundays preaching multiple times and his weekdays both writing and preparing sermons. In the midst of such busyness, it would be natural for a newlywed wife to become angry at her husband's distracted state. In fact, Susannah wrote of one such instance when she confided her loneliness and anger to her mother.

"She wisely reasoned," said Susannah, "that my chosen husband was no ordinary man, that his whole life was absolutely dedicated to God and his service, and that I must never, never hinder him by trying to put myself first in his heart."

And so Susannah heeded her mother's advice and began to invest her time in ministering alongside her husband. While Charles spent hours in his office writing and days and nights preaching, Susannah made it her goal to tend to their two young sons and to the needy in her community. Susannah's particular passion became a project named the Book Fund, which provided written resources for pastors who could not otherwise afford them. After all, Susannah reasoned, "What must their ministries become if their minds are starved?"

During the years of her devoted ministry, Susannah sent books and rich theological resources to over 25,000 pastors that enabled the seed of the gospel to be sown with greater richness all over the world.

Though Susannah's health was poor for most of her life, it was in her later years that illness steadily plagued her body, leading to daily discomfort. And though many would allow themselves rest and space in which to recuperate, she continued her Book Fund work with even greater resolve. Her husband praised her with these words: "Let every believer accept this as the inference of experience: that for most human maladies, the best relief and antidote will be found in self-sacrificing work for Jesus Christ."

And until the end of her life, Susannah Spurgeon worked tirelessly in the furtherance of the gospel. Even after Charles passed away in 1892, she remained committed to kingdom work, spending more than a dozen years of widowhood in faithful service. In 1903, she weakened greatly and passed away peacefully, exclaiming upon her deathbed, "Blessed Jesus! Blessed Jesus! I can see the King in His glory!" And I imagine that she was received by her Savior with a, "Well done, good and faithful servant. Enter your rest."

How does Susannah's example of a life of quiet service encourage you? Are there any areas where God is calling you to sacrifice your own wants and desires and put Him first instead?