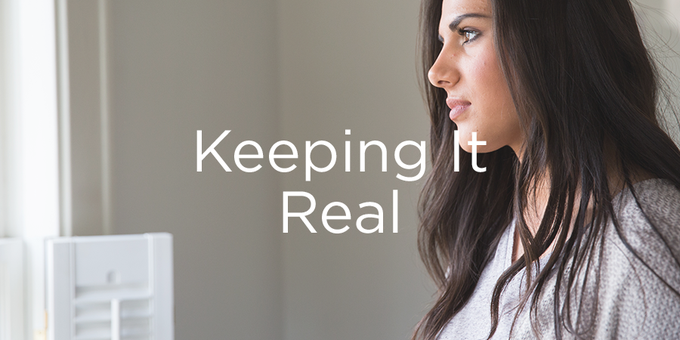 I recently watched an interview on the news where the interviewer commented, "Let's be real here." Then she followed that with an analysis of the other person's actions that were—as she saw them—fake, put-on, and over-the-top. She was challenging the person to be real.

That interview made me wonder . . . do outward actions observed prove inward intent?

How do you determine if someone is being real? Sincere? Authentic?

Very often we define real as the opposite of what we've seen as fake, put on, and—in the church—legalistic. Then to combat that fake, put-on attitude or action, we go to what we perceive as the opposite to define "real." The results are some formulas:

If Person A says or does this (the thing that proved to be real by someone else), then Person A is real.

If Person B says or does this (the thing that proved to be fake by someone else), then Person B is fake.

These formulas often fail, but unfortunately, we continue to use the faulty formula instead of sound, careful, individual discernment.

A Standard for "Real"

While there are certainly words and actions that unequivocally reveal a person's attitude and intent, there are also circumstances where we need careful, Bible-saturated principles to determine whether someone is being real.

There are also plenty of times when it is impossible to make that judgment. Admitting that is both essential and rare. What's far more common is for people to make—and share—their judgments (real or not!) based on personal experience and opinion.

As we seek to define and determine "real," we need the same thing we need in every circumstance: a focus on Christ and truth from the Word. Hebrews 1:3 proclaims:

He is the radiance of the glory of God and the exact imprint of his nature, and he upholds the universe by the word of his power.

Jesus is the exact imprint of God—the real thing—so Jesus should be our standard of real. Who He is, how He lived as a man in the world, and how He determined if those around Him were real or not.

To get a glimpse into how Jesus defines "real," let's look at two well-known biblical examples. First, the rich young ruler:

And Jesus, looking at him, loved him, and said to him, "You lack one thing: go, sell all that you have and give to the poor, and you will have treasure in heaven; and come, follow me" (Mark 10:21).

Jesus is emphasizing that this man must submit to His Lordship. The rich young ruler must see his sin, recognize his inability to do anything to pay for that sin, and admit his need for a Savior.

Jesus offers the young man the matchless treasure of salvation if he stops focusing on his riches and instead follows Him. It's not the young ruler's riches that keep him from belief; it's his focus on those riches. We see Jesus seeking to reveal this man's heart, motivations, and focus. We see Jesus getting to the "real" young ruler.

But the Lord answered her, "Martha, Martha, you are anxious and troubled about many things, but one thing is necessary. Mary has chosen the good portion, which will not be taken away from her" (Luke 10:41–42).

It is Martha's attitude and her wrong focus that Jesus seeks to point out and correct. People needed to eat, and feeding a group of people takes effort and preparation. But Martha's wrong attitude and focus are revealed in how she was serving, as well as her complaint to Jesus about her sister, Mary, doing nothing but sitting at His feet. While often it's Mary's actions that are heralded as the "one thing" that is best, I believe it is Mary's focus and purpose revealed through her actions that Jesus considered best.

In both of these examples, Jesus is getting to the heart and focus of the person. That's where authenticity is revealed. We find people in the Bible who had riches and glorified God, as well as people who served and glorified God.

For example, Joseph, "a rich man from Arimathea," went to Pilate after Jesus had died to ask for His body so he could gave Him a proper burial in his own new tomb (Matt. 27:57–60).

And then Jesus Himself hosted the Passover meal the night before He was crucified that included detailed preparations (Luke 22) and humble, yet active service as He washed His disciples' feet (John 13). Jesus' words and actions revealed His heart to glorify the Father.

So there is no formula for real. There isn't one for fake either.

"Real" should reveal itself through the focus and heart of a person, not by formulas and surface observables. That's how Jesus defined real, so that's how we should, too.

How Can I Tell?

Real or not? There are three things you can keep in mind:

Consistently ask God to keep your heart and focus on Him. Seek His perspective. Be willing to be both corrected and to humbly continue in the actions you have purposed in Christ. Second Corinthians 2:17 is an excellent guide:

For we are not, like so many, peddlers of God's word, but as men of sincerity, as commissioned by God, in the sight of God we speak in Christ.

Instead, make Christ's process of determining "real" your process. Remember in the examples of the rich young ruler and Martha, it wasn't their actions alone that revealed their "realness." It was their focus and heart.

3. Finally, live out and use your real definitions humbly.

Use wisdom from God's Word and discernment from the Holy Spirit to determine who may be real or not. Then wisely and humbly proceed.

We're called to live a life that focuses on our Father and His will. We're called to know, display, and proclaim the love and truth of Christ. "Real" is revealed through a focus and purpose rooted in Him. There are no formulas for real. Only the standard set by Christ.

Are there opinions and attitudes God is showing you that need to be changed? Are you pursuing Christ-like thoughts, words, and actions? Will your standard be His?