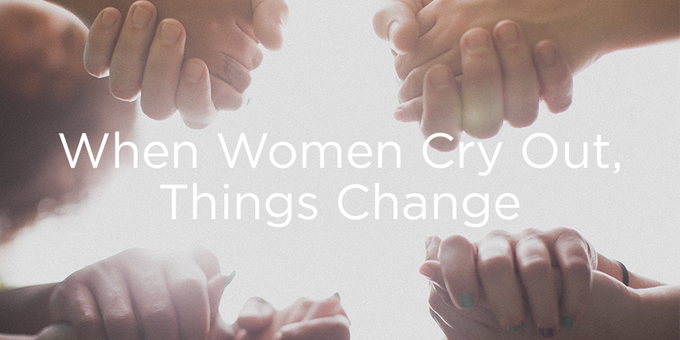 When Women Cry Out, Things Change

Have you ever wondered how your ordinary life could be used to accomplish extraordinary works for the Lord? If you have, get ready to be inspired by two real-life prayer heros of mine who are far from being famous. It's been said of these women that they were little known by men but well known by God.

The Smith sisters rarely left their roadside cottage in Barvas on the Isle of Lewis off the coast of Scotland. If you happened upon them, you'd feel compassion for the elderly ladies in their eighties. Peggy, the elder of the two, was blind. Christine was severely crippled with arthritis. You may assume their season for serving the Lord had come and gone. But despite appearances, God had an assignment for these two ailing sisters who were particularly sensitive and responsive to His Spirit.

Like other discerning villagers in 1949, Peggy and Christine recognized the church wasn't thriving as it once had. God gave them a burden over the spiritual indifference among Christians. They were troubled by a growing trend of young people toward worldliness. It became clear that an outpouring of God's Spirit in revival was the only hope to supernaturally reverse the situation.

Revival fires had been experienced in Barvas ten years earlier. Men and women whose lives had been forever changed were keenly aware of the island's dismal spiritual state and were willing to devote themselves to the work of prayer.

None are more hailed than the Smith sisters.

Peggy and Christine believed God gave them the promise of Isaiah 44:3:

"I will pour water on the thirsty land, and streams on the dry ground."

In faith, they inclined their hearts to pray and believe that God would be faithful to His Word. They appealed to their pastor, Rev. James MacKay, and urged him to call the leaders of the church for special times of seeking the Lord. The decision was made to pray through the night twice a week. Peggy and Christine rose from their beds to pray fervently during the same hours that the church leaders gathered in a thatched barn.

Eighteen months passed with no evidence of God hearing or answering their pleas, until one evening, when one of the men stood to read Psalm 24:3–4:

Who shall ascend the hill of the LORD? And who shall stand in his holy place? He who has clean hands and a pure heart.

To his fellow church leaders, he agonized, "Brethren, it seems to me just so much humbug to be waiting and praying as we are, if we ourselves are not rightly related to God." Lifting his hands to heaven, he cried out, "Are my hands clean; my heart pure?"

As these men humbled themselves before God and expressed their need for Him, the Lord displayed His holiness and filled the barn where they prayed with His awe-producing presence. Trembling, the men fell facedown into the straw in worship. It was the spark the villagers had been praying for . . . a foretaste of the Hebrides Revival, which lasted over two years on the Isle of Lewis.

Imagine today how God may respond if we united our hearts and hands with our sisters to cry out to God in fervent prayer.

The Revive Our Hearts Cry Out! Simulcast on Friday, September 23, is your invitation to rise up with your sisters as mighty prayer warriors like Peggy and Christine Smith. The event is free and designed to accommodate all sizes of groups—from intimate gatherings in homes to packed church buildings to sold-out arenas.

Today, Nancy DeMoss Wolgemuth will share her burden for 100,000 women to gather together for the Cry Out! Nationwide Prayer Event on the Revive Our Hearts radio broadcast. Listen to the amazing story of how God is orchestrating this event. Or if you're ready to find out more now, visit CryOut16.com.

Peggy and Christine Smith had no unique talents or gifting from the Lord. This servant duo was simply alert and available for the Lord's work when He called. How about you? Are you ready?

Peggy and Christine Smith moved heaven from their village cottage, and wherever you live, wherever you work, wherever God has placed you . . . you can, too!