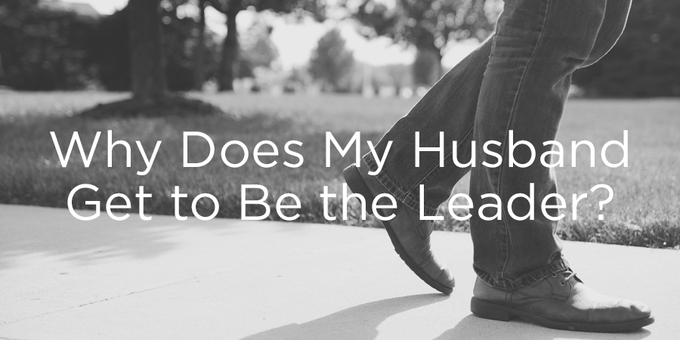 Why Does My Husband Get to Be the Leader?

Editor's Note: As her daughters began their married lives, Barbara Rainey wanted to share some of the lessons she learned throughout her own marriage as well as those gleaned from years of ministry to couples. In these heartfelt, insightful letters that eventually evolved into the book Letters to My Daughters: The Art of Being a Wife, she answers the tough questions and addresses the realities of marriage.

You're good at letting Dad take the lead and you being the helper. But I'm not. I feel like I know better than my husband does. How come he gets to be the deciding factor? Sometimes I think the whole man as leader thing is more than a tad old-fashioned. Women today are working as hard as men, competing in the marketplace, contributing just as they are. What's up with marriage? Why are we supposed to come home and be the "little woman"?

Okay, prepare for a blunt answer to such a blunt question!

To add a little perspective, women have worked as hard as men since time began—unless they were born into the nobility at Downton Abbey. Your great grandmother worked hard on the farm with conditions that would make all of us wilt—no air-conditioning or appliances for starters.

She grew and canned all their food, sewed their clothes, served a very bitter father-in-law who lived with them, and took in ironing to help make ends meet. So keep in mind that your generation of career-minded women isn't the first to seek balance in work and marriage.

Follow me with a music analogy that I'll use to help explain. When your dad and I got married, I was eager to begin making beautiful music in my marriage. I wanted to play my part well to harmonize with him. I knew helper was the title of my sheet of music, but what did that mean? Other than cooking and doing our combined laundry, I couldn't think of many helpful tasks, which for me—a task-oriented woman—was my approach. Honestly, I had no idea what helper really meant.

What Does Helper Mean?

The only way to figure it out is to go back to the original score in Genesis. I remember learning the puzzling fact that our perfect God made Adam incomplete. Adam was created with a need for another person. And so this is the mystery of marriage. Both parts of the original score, man and woman, are needed for what God intended to say.

Complicating it further, the Bible says marriage is a picture of Christ with His Church, which is pictured as a bride. Somehow in some enigmatic way, my marriage (and yours) is a picture of God Himself. It is an echo of a piece of supremely beautiful music that once was heard on earth before the fall.

Returning to the Genesis story, Eve was fashioned, a word that speaks to the beautiful, not made out of dirt like the man. Importantly, God didn't create her to fix a mistake, for Adam's incomplete state was intentional. She, too, was made with intentionality to complete Adam. A perfectly matched pair. Two halves that fit like two puzzle pieces to make one whole song.

As co-regents, Adam and Eve were complete without any dissonance. Together their maleness and femaleness produced a harmony of beauty, much like the rising and falling of notes on a sheet of music, like a duet.

The addition of her life to his elevated and enhanced his manhood. Without her he had been less.

He was wowed by her beauty, her entirely different capacities, and the energy her presence provided. He eagerly elevated her female glory and included her in everything he did. Their completeness mirrored the image of the relationship in the Trinity itself.

So how do our marriages do the same today? And why is your husband the leader?

God Made the Man to Lead

Here is the pointed answer to your question. Like it or not, God made him, designed him, even coded the man's DNA to lead.

This does not mean you cannot lead at all. Your original design as a woman was to be a co-regent in Eden, remember? You have leadership skills, and so do I. In the context of God's original intentions it makes sense. There was no competition between man and woman in Eden.

But in our marriage, while I lead in a variety of ways, I choose to look to my husband as my leader. I willingly accept this created order as part of the mystery God has written. I admit I don't always like it, because I want it done my way too often; nor do I always understand it, but by following the music together we've found harmony.

My husband's design to lead might not be my choice. But I have to remember that it was not his choice either. There is a conductor of this duet of ours, and it is not me or my husband. God is writing the roles of our marriage, and my husband must follow them too. He has his part to play that requires him to pay close attention to the conductor, who directs both of us in our marriage.

Viewing marriage as an exquisite piece of music, as multifaceted as a symphony, elevates your vision for the beauty God originally intended. Both of you have to decide if you'll follow the conductor's leading or go your own way.

Long ago, I decided I would follow God's design even when it made no sense. Today it feels right that both of us are becoming our best. Together, we are both more productive, more creative, and more complete than we would have been alone.

I don't want to miss one note of the symphony God wants to write with us, and I hope you want the same in your marriage, too. God will make beautiful music with your union if you do.