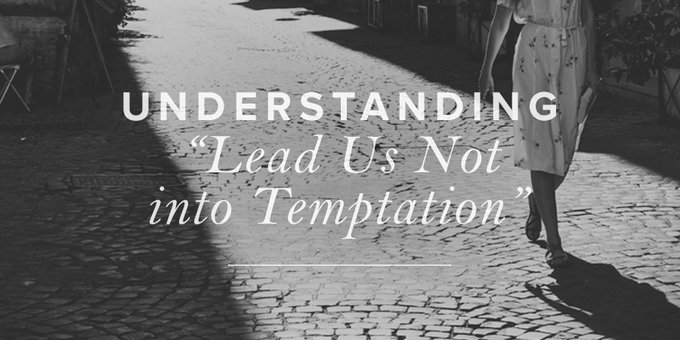 A young woman once asked me, “If I surrender my marriage to God, will He keep my husband from having another affair?” Her eyes searched mine in desperation, and though I wanted to give her comfort, the particular assurance she longed for—a future free of sin’s pain—wasn’t mine to give.

I have no idea what the future holds, of course, since I’m not God. And while I know God can keep our husbands and adult children and sisters and friends from affairs—or any number of other sinful traps, when I survey the world I live in, there are people falling to temptation left and right. What then, is our hope?

I couldn’t look into the eyes of this young wife and say, “God never puts his children in painful situations.” Or, “Husbands don’t fall for the second time.” But here’s what I could say. Trying to walk life’s path without God would be far more painful and treacherous than walking with Him.

“Lead us not into temptation,” Jesus offered as the sixth petition in his model prayer (Matt. 6:13).

For a long bit, I’ve read this verse with a little mental sketch of a fork in the road with two signs pointing in opposite directions. One path is marked, “Temptation,” and the other, “Right Living.” And I, as a Christian, am asking God to help me pick the correct path: the one that avoids temptation. But this is a false representation of this verse—and life. There is no path that leads away from temptation.

Throughout the maze of life, we should assume that there will be slimy pits of temptation alongside every micro turn. Even a Christian who has lived faithfully for decades should not be surprised when she is tempted by sin. It’s been that way from the very beginning.

With the juice of the forbidden fruit still on Adam and Eve’s lips, sin fell like a dark, sticky curtain over every square inch of creation. There is no slit (apart from going to heaven) by which we can escape temptation. Our world is completely pitted with traps. Even today, I’m guessing you came across slimy pits of greed, deceit, or lust. Traps abound. People everywhere are falling in. And what is our response?

We are taught to pray for ourselves and others, “Lead us not into temptation.” That is, As I walk through this valley with its shadows of evil and doubt, don’t let me slide in. Help me find the sure footing of obedience.

To not ask for help from God would be quite presumptuous, don’t you think? We need daily help from our Father. We need him to walk beside us, hold our hands, and keep us steady. Our loved ones, our children, our church leaders, and our friends all need help from the Father. There is not coming a day when, as God-following people, we suddenly look around and realize we’ve arrived, that God has finally led us past all temptation. That place or chapter of life—here on earth at least—simply doesn’t exist.

This summer, Pope Francis changed the wording of the “Our Father” (or the Lord’s Prayer), which is read in Catholic masses everywhere, to read, “Do not let us fall into temptation,” instead of, “Lead us not into temptation.” And I can see why he wanted to change it. It’s uncomfortable to think of a Father who leads His children right into a place where we could fall, isn’t it?

Yet even God’s own Son “was led by the Spirit into the wilderness for forty days, being tempted by the devil” (Luke 4:1–2). Notice that Jesus didn’t wander off the path into Satan’s territory. He was led to a place where He, like Eve, went toe to toe with the Devil. We should not be surprised, then, when we are also led into situations where we must take our stand against the evil one (1 Peter 4:12, Eph. 6:11).

To be clear, God tempts no one, and He, Himself, cannot be tempted (James 1:13). And this, friend, is our anchor. If there is zero chance of God being tempted, and there is also zero chance of Him giving even the slightest nudge toward one of temptation’s pits, no wonder He is not threatened by the Devil breathing into the face of one of His children. Of course, this doesn’t mean that we don’t feel threatened by it. Not in the least!

We can and should pray, “Lead us not into temptation! Please God, deliver us!” But we pray this because we are aligning ourselves with God’s perspective, not because we’re trying to get Him to see things from ours.

Jesus, who saw things both from God’s viewpoint and ours, looked straight into the pit of evil and didn’t fall in. He was tempted, but He did not sin (Heb. 4:15). Rather than falling into temptation, Jesus reversed the curse of sin and put a new storyline into play: one where human beings are tempted, but do not fall prey to sin.

Is this the storyline you long for? Do you long for the day when your husband, child, sister, or friend stands against some past temptation? Do you crave this for yourself? This desire for a new storyline is echoed in each of our prayers when we cry out to the Father, “Lead us not into temptation, but deliver us from evil!”

John Piper recently responded to questions pouring in about a prominent leader who has “de-converted.” Some are asking, “If he could fall away, could I, too?” The short answer Piper gave is yes. Any of us could fall. Not one of us can keep ourselves from falling into temptation. But here’s what gives us hope: God can.

Every day, God answers our prayers. He causes drug-addicted prodigals to come home. He causes little girls who were abused to grow into godly women of faith. He causes the eyes of doubting agnostics to awaken to the light of truth. Yes, God can. But the question I struggle with is: will He?

I’m guessing that your heart today, like mine, is deeply troubled by the many pitfalls of temptation into sin. Perhaps you have a sister in an abusive marriage. A friend slipping into despondency because her husband was killed in a crash. A son addicted to pornography. A friend’s child who has chosen to transition to the opposite gender. It is good and right for you and me to bundle each of these burdens up and spill them out before the Father. To not do so would be to suggest that He is not able, that He is not God.

But demanding that He move in the way that I want is to make the same suggestion. Here’s the truth: He is God, and I am not.

Remember the response of Shadrach, Meshach, and Abednego when Nebuchadnezzar demanded they bow to his statue or be thrown into the fiery furnace? They said, “our God whom we serve is able to deliver us . . . But if not, be it known to you, O king, that we will not serve your gods or worship the golden image that you have set up” (Dan. 3:17–18, emphasis added).

They knew that God could deliver them from evil in this situation. But they didn’t demand that God would. In other words, they let God be God. There was a great temptation for these men to bow. And they deeply desired for God to deliver them from this evil king. But rather than asking God to take their viewpoint, they humbled themselves and deferred to His. And Jesus met them in the middle of the fire (Dan. 3:25).

Friends, God does not offer us a sunny path that is completely void of temptation. You can search the world over, and it will not be found. But our Lord will lead us, He will deliver us, and He will be with us in the fire.

Praying “Deliver Us from Evil”

Lord, Forgive Us as We Forgive

When You Don’t Want This Daily Bread

What It Means to Pray God’s Will Be Done

What It Means to Pray “Your Kingdom Come”

Praying “Hallowed Be Your Name”