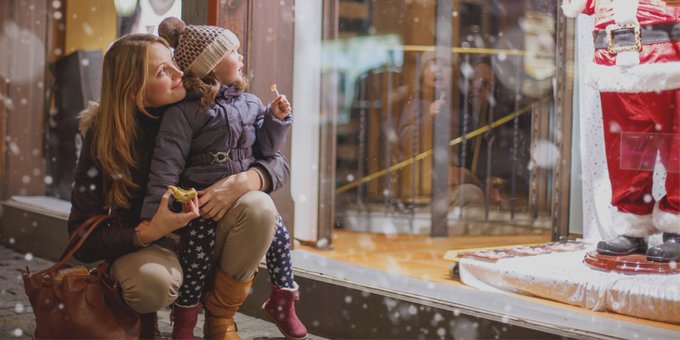 Do you remember the excitement of Christmas when you were a kid? For me, there was no worry or dread or feeling of Phew, I made it! Instead there was only wonder and awe as I sat contemplating how Santa could fit down our chimney. I sat on pins and needles as I waited for mom to pull out the Christmas cookies. I counted down to December 25th for no other reason than the thrill.

As a kid, Christmas was pure joy, right? But as the years mounted, the distractions piled up: the comparison game, the stress of putting up Pinterest-worthy decorations, and the difficult family dynamics, along with the pressures of gift buying, taking a picture-perfect Christmas card, and not gaining ten pounds by January. (Can I get an amen?)

All of these distractions pull me away from the true wonder of this season. The cares of Christmas taper my excitement, much as the cares of this world can abate the wonder of our Christianity over time.

“Therefore we must pay much closer attention to what we have heard, lest we drift away from it,” says the writer of Hebrews (Heb. 2:1). Lest we drift away! Just like Christmas is to a kid, the declaration of salvation over a newly repentant soul is exciting. There is joy and gladness and awe and wonder. To see the complexity of our sin compared to the completeness of God’s mercy is to contemplate the glory of God.

But then as life goes on and the distractions increase, so does the wonder of our salvation flee like the years gone by. But the testimony of each believer is forever and always something to marvel at.

What is man, that you are mindful of him, or the son of man, that you care for him? You made him for a little while lower than the angels; you have crowned him with glory and honor, putting everything in subjection under his feet.” (Heb. 2:6–8)

It’s not to the angels God gave this world (though it’s ruled by some fallen ones for a season), and it’s not with the angels God plans to rule the next. Daniel 7:27 says,

“And the kingdom and the dominion and the greatness of the kingdoms under the whole heaven shall be given to the people of the saints of the Most High; their kingdom shall be an everlasting kingdom, and all dominions shall serve and obey them.”

Um, excuse me, but us? Yes, we, the people of God, will one day rule with God. And actually, that’s how humanity began, until sin entered the world and death through sin (Rom. 5:12), separating us from God and annihilating our ability to rule alongside Him in holiness.

God’s intent for man (and woman) crumbled with one cataclysmic bite.

You see, in the beginning Adam and Eve ruled the world in perfect harmony with God—until they threw it all away with one seemingly harmless act of disobedience, subjecting this world to the dominion of the serpent (who is called Satan in Rev. 12:9).

Though Adam and Eve could have called for help and run to the LORD, they didn’t. Just like that, the most catastrophic event this world has ever seen took place with a bite of forbidden food.

What would God do? Yell at them? Turn His back on them? Zap them into oblivion? No, instead He called to them, “Where are you?” (Gen. 3:9). And then He clothed them and showered them with compassion, by offering them hope through His words to the serpent.

While I would have walked away from my ungrateful, self-centered image-bearers, God stepped toward them (and us), announcing to this small party a rescue plan for His people.

There would be an offspring of the woman who would crush the head of Satan, making things right again. He would restore the holiness of man, along with our ability to rule alongside God. All was not lost.

An offspring of the woman would make things right again.

But who? And how? And when? These are all questions that I have no doubt Adam and Eve contemplated often, and yet we hold the answers to them. God Himself, in the person of Jesus Christ, born to a virgin, would pierce the night with His infant cries. For it is He alone who holds the power over sin and death.

Since therefore the children share in flesh and blood, he himself likewise partook of the same things, that through death he might destroy the one who has the power of death, that is, the devil, and deliver all those who through fear of death were subject to lifelong slavery.

Oh the wonder of Christmas! It’s not just the birth of a Savior; it’s the fulfillment of a promise God made to two broken-hearted people in a garden. A promise God never went back on, though thousands of years went by with the inhabitants of earth still reeling under the consequences of Adam and Eve’s catastrophic decision.

Though generation after generation have blasphemed the name of God (and still are to this day), the thread of hope and blessing through a Redeemer has persisted in parallel with the unfaithfulness of man. Why? So that God could shower His image-bearers with compassion instead of the condemnation we actually deserve.

And therein lies the wonder of Christmas, that God came anyway.

That God came anyway, that God Himself would put on flesh and blood so that “he might taste death for everyone” (Heb. 2:9), delivering us from the power of evil and the stronghold of sin—that is a wonder.

Therefore He had to be made like his brothers in every respect, so that he might become a merciful and faithful high priest in the service of God, to make propitiation for the sins of the people. (Heb. 2:17)

And as if that weren’t enough, there’s more. Christ also came in order to sympathize with us in our weakness and help us in times of temptation (Heb. 2:13) and be our brother (Heb. 2:11) and exemplify what it is to walk by faith (Heb. 2:13).

The extent God went to for us is remarkable.

He did it all for a people who most of the time act like they don’t really care. A people who from the beginning have drifted away from Him over and over again. A people who have today made Christmas and the coming of the only One who can save us more about the fuss and the festivities than the faithfulness of God.

Christmas isn’t just a neat story, but the revelation of God’s promise to Eve, and then Noah, Abraham, Judah, Moses, David, Samuel, Isaiah, and Daniel (just to name a few). It’s the moment the saints of the Old Testament longed to see and the earthly beginning of our Christianity.

Everything changed with the birth of Christ, the death and resurrection of Christ, and the ascendency of Christ. Why? So that we might one day again reign with Christ. It’s almost unbelievable! That’s why God tells us to believe and remember and celebrate and worship.

To take back the awe of Christmas is to get back to the awe of Christ. In spite of all the years with all the sin and rejection of God’s will, a Savior still came to the sleepy town of Bethlehem. That’s a wonder.

Previous Post He Is above All Things, and He Remains Forever: Hebrews 1
Next Post Searching for a Better Builder: Hebrews 3

A Benediction for the New Year: Hebrews 13

Have Faith, God Is Doing Something: Hebrews 11

When You Don’t Let Yourself off the Hook: Hebrews 9

The Necessity of a Forever High Priest: Hebrews 7

A Steadfast Anchor for Your Insecurities: Hebrews 6

Serving Well During the Holidays: Hebrews 5

Searching for a Better Builder: Hebrews 3

He Is above All Things, and He Remains Forever: Hebrews 1