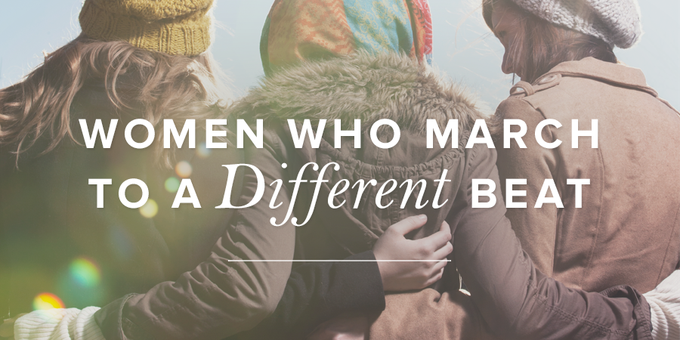 There is no ignoring the women’s march that took place this past Saturday in all fifty states and in over sixty countries.

Upon first glance, this women’s march could have appealed to many—and it did, even to some Christians. I know of women who marched against injustice, racism, misogyny, poverty, and much more.

There is nothing inherently wrong with women joining together to march for awareness of an issue. In fact, many women will be doing just that at today’s March for Life.

But while the specific issues women marched for this past Saturday are as varied as the participants’ faces, the organizers’ intent for the march was crystal clear.

The Principles Behind This March

For one, this women’s march was built around “reproductive rights.” In the organizers’ words:

This means open access to safe, legal, affordable abortion . . . for all people.

This is so important to them, that the week of the event they disinvited a fellow feminist group that was also pro-life. Turns out this women’s march wasn’t as inclusive as was originally claimed. As a woman who values and desires to protect human life, I will not—I cannot—participate in a march for a woman’s right to murder her own child, created in the image of God (Ps. 139:13–14).

This woman’s march was also built around “LGBTQIA rights.” In their words:

We must have the power to control our bodies and be free from gender norms, expectations and stereotypes.

I would welcome a person who practices “LGBTQIA” behaviors into my home and life as a friend. But I cannot march for their right to be free from God’s beautiful design for their life as male or female (Gen. 1:27) any more than I can march for anyone’s right to rebel against the King in any area of life.

The Spirit of This March

In addition to disagreeing with these values around which the the march’s organizers were united, I also cannot express solidarity with the spirit in which many of these women sought to be heard.

For example, here’s a snippet from Madonna’s speech at the Washington, D.C., event:

Welcome to the revolution of love. To the rebellion. . . . It took us this darkness to wake us the f--- up. . . . Yes, I'm angry. Yes, I am outraged. Yes, I have thought an awful lot of blowing up the White House, but I know that this won’t change anything.

Or Angela Davis, another speaker at the main event:

As a follower of Christ, I am called to march to a different beat. There is a better way.

There Is a Better Way

Regardless of your concerns about what the next four years might hold, here are three truths you can count on.

As followers of Christ, we live in two kingdoms simultaneously: the kingdom of man and the kingdom of God. May we reflect the King of kings in word, action, and spirit as we live as citizens of both kingdoms.

May we nurture peaceful hearts rather than fearful ones.

May we seek to understand first, rather than insisting that we be heard.

May we love instead of hate.

May we open our homes and dinner tables to people who are just like we once were, before we encountered God’s grace (1 Cor. 6:11).

May we pray without ceasing.

And may we point our neighbors and our culture to God’s life-giving ways, seeking their best.