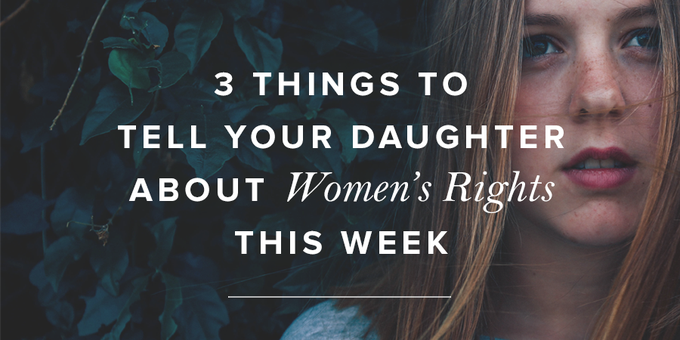 Dear mothers of the world, my heart is pleading with God for your daughters, my daughters, and the motherless daughters, and all the lies about their womanhood that they will face on social media this week.

I’m calling upon you to join me in fasting and prayer March 8–10 for the testimony of biblical womanhood and for you to have three conversations with your daughters about what they will see in the media this week. While the coming public conversation has potential to wreak havoc on a girl’s belief system when it comes to womanhood, it can also be an opportunity for us to train up the younger women entrusted to us.

The Good News and the Bad

Sixty percent of Americans get their news from social media, especially the younger demographic that spends about nine hours a day on social media.

The good news is anyone can have their say. The bad news is that uneducated views can become distorted as balanced and true.

The good news is you can see what you most want to see. The bad news is you don’t see everything you need to see to create an informed decision. (Social media uses computer algorithms to feed you information, skewing the amount of information you’ll receive about a topic based on what you post and what is trending.)

What’s going to trend this week? Women’s rights. How do I know that? The leaders of the Women’s March held in January 2017 are calling for another demonstration called “A Day Without a Woman” on Wednesday, March 8. Since an estimated 2.7 to 5 million women (depending on the source) participated globally in January, we can assume a potential gain in participation, and much of this protest is going to happen online.

Conversations You Should Have

Here are three conversations you should have with your daughter this week.

But . . . God does give us examples of confronting our governmental leaders.

Queen Esther used fasting, prayer, and respectful dialogue to confront an evil government (Est. 4). Esther and her young women attendants led the whole nation in an intense period of fasting and prayer for three days. Amazingly, dark schemes at the highest levels of government were exposed. Esther’s fast effectively reversed the curse and shifted the whole public policy of the Persian Empire in favor of the Jewish people. (Did you know that Purim, the holiday that celebrates the deliverance of the Jewish people from Haman’s plot, will be observed this coming weekend, March 11–12?)

Abigail bowed humbly and gave kind, helpful gifts of food to confront certain extermination for her family (1 Sam. 25). She no doubt prepared that food with the helpful hands of other women in her family. In bowing in humility before King David with these helpful gifts, she softened the King’s heart and he changed his mind about how he would punish the horrible disrespect of Abigail’s husband, Nabal.

These are our biblical models in pursuing our rights. Using prayer, fasting, humility, and intelligent dialogue, these women changed governments and leaders. These are the radical methods God gives us when our rights are threatened. These were acts of desperate dependence on God, not assertions of self-dependence, and the only thing capable of breaking the oppression of any people group.

Maybe then God would be glorified as the defender of women, rather than seeking and bringing glory to ourselves.

Adapted from 3 Things You Must Tell Your Daughter About Women’s Rights . . . This Week originally posted on PureFreedom.org.