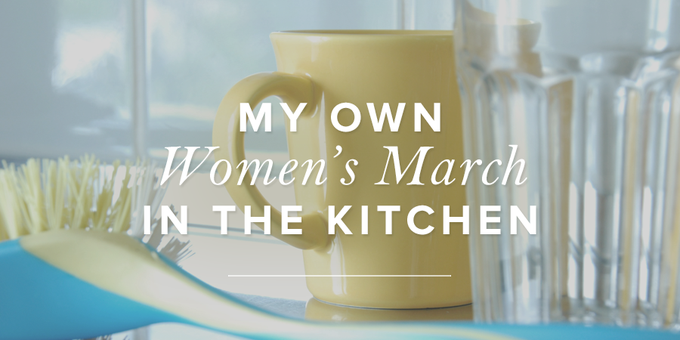 As images of women, filling the streets to overflowing, filled the screen in our family room last Saturday, my husband kept asking, “Why are they marching? What’s the purpose?”

Undoubtedly, women marched for a variety of reasons. Clearly, some felt threatened. Others felt offended. Many feel anxious about the direction they see our nation taking.

As I watched the coverage of the event, I was reminded of the gravitational pull of my own heart to clamor for respect and protection, to know that the future is secure and all is at peace. And if my sense of security begins to unravel or something causes me to feel threatened, unappreciated, or disrespected, I often have an inner urgency to stand up and march—if only in my kitchen.

My March in the Kitchen

At the end of the day, as my husband emptied the dishwasher (bless him) and I ate a 9 p.m. salad, we talked over our schedule. It’s a busy week, with my book launching, and I was excitedly sharing all of my news. But then we discovered a conflict. He had scheduled an appointment for us to meet with our son’s career counselor at the exact same time I had scheduled a TV interview about my new book. My first ever TV interview, I might add.

So okay . . . even if this show only were to air at 4 a.m. in Romania, it would still be a big deal to me. He gets that, right? But no. Apparently he doesn’t get that, because he proceeded to express great frustration over the scheduling error since he had checked my calendar and it was clear.

Well, that escalated things. He started putting the silverware in the drawer with a little more pizazz and with an edge of sarcasm said, “No, no. That’s just fine. I only worked a ten-hour day. I’ll just be a yes-man and change the appointment.”

In my new book, Control Girl, I wrote, “My culture may cheer me on when I’m pushy, independent, demanding, and domineering, but when I turn on my heel and bring those attitudes to my marriage or other relationships, I inevitably drive in wedges. The more controlling I get, the less happy we all are.”

This was certainly true last night. Even after my gracious husband tried to diffuse the situation and suggest a peaceful solution, I persisted with my pushy, demanding, entitled demeanor. As a result, the moments of our day that are often filled with cheerful dialogue and meaningful conversation were on this evening filled with silence between two people who had stormed off to separate corners.

At first it felt good to challenge him, to feel the frustration and resentment flow freely from my heart. In pride and defiance, I was doing my own women’s march. I was performing a demonstration in my own kitchen. My heart craved the chance to rebuke my leader and take control; to stand up for myself and demand respect.

But in the quiet moments that followed, after my anger subsided, I found my march hadn’t brought lasting satisfaction. It didn’t produce any of the outcomes I crave. No peace. No joy. No family community. No playful banter between a husband and wife, enjoying their home and their family together. Certainly not a greater sense of respect between two loving life-partners.

Once again, I had been deceived. My heart had tempted me down the path of a marching Control Girl, and once again, I was filled with regret. It’s a lifetime of battling this all-too-familiar tendency that led to my writing Control Girl. In this book I share my journey toward  finding security, hope, and peace—not by taking control or refusing to give it up, but in surrendering to the One who truly is in control.

A woman who is surrendered to God knows her future is secure, no matter who is in office in Washington, DC, or what her husband puts on the calendar. She has hope, not because she’s confident of the future she can create, but because of the One who holds the future. She has peace, not because the world is settled and calm, but because she has spent time settling her heart before her Lord.

While peaceful protests and marches may have their place, the attitudes often expressed by those who join them do not have a place in the heart of a woman who cries, “Yes, Lord!”

A “Yes, Lord!” woman is not one who gives in to tyranny or settles for mistreatment or abuse. Being complacent about sin is never the answer. But the woman who says “yes” to God knows she doesn’t have to heap the burden of trying to control everything on her own back.

So last night, when my husband called the kids and me to the family room for our nightly Bible time, I came with a heavy heart. I told Ken I was sorry for my belligerent attitude. Like so many times before, I apologized for being a Control Girl. Forgiveness was extended, grace was found, and peace was restored—both to my home and my heart.

Friends, if your heart is in turmoil over some uncertainty you sense or because of some way you’ve been offended, I encourage you—before you set out to march or protest—to first turn to the One who holds your future and your heart. God is in control.

He always has been and always will.

There is nothing that can yank Him off His throne. There is no one who can overthrow His plans. His will and His purposes will stand (Isa. 46:10). And He invites you—His daughter—to live in accordance with that truth.

Previous Post Facing Heartache on Earth; Finding Hope in the Heavens
Next Post Women Who March to a Different Beat