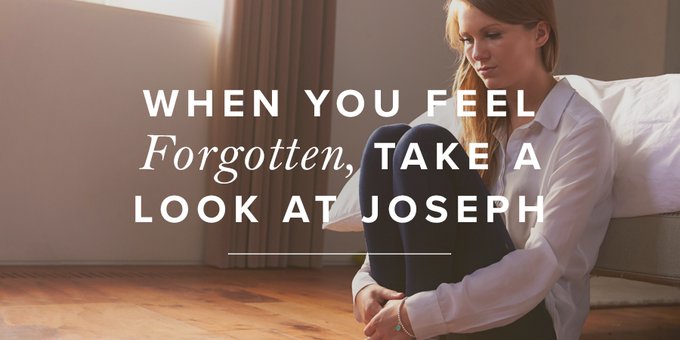 When You Feel Forgotten, Take a Look at Joseph

He didn’t do anything to place himself in this difficult situation. From the outside it would appear that Joseph was forgotten, destined to dwell with the “have-nots” of the world. His own brothers wanted him dead but settled on selling him off to strangers. Entering a foreign culture, he’s taken advantage of and wrongly accused. He didn’t have a voice in the trajectory of his life. He didn’t need one. There was a God with all authority, whose hand of mercy, grace, and Providence was guiding every single seemingly senseless step. (See Gen. 37, 39–50 to read Joseph’s full story.)

Long before the time of Joseph, God warned Satan, the Father of lies, that He would crush his head (Gen. 3:15). Ever since Satan slithered out slick lies to Eve, he has been attempting to annihilate the seed from which the Messiah would come. God promised Abraham that he would be the father of a nation—God’s chosen people from which salvation would be born into the world.

From Abraham to Isaac to Jacob to Joseph, God had been faithful. But when an innocent Joseph was sitting in a prison in Egypt, while his brothers still enjoyed life with their father, it might have appeared as if the enemy was successful in at least shutting down the life of one of the men from which the twelve tribes of Israel would be born.

Famine was coming, and God revealed that fact to Joseph. Without adequate food, the people— including Jacob’s family—would perish. But God wove together the hearts of men, circumstances, and even nature itself in order to accomplish what He willed and spoke.

Scripture never reveals to us if Joseph sat around questioning and doubting, but it does tell us of his faithfulness, continued dedication, and trustworthiness.

Always, there is an enemy of God at work, and always, there is the sin in the heart of man, but always, there is a God who trumps it all. The life of Joseph reveals much about how we should approach our circumstances, especially those difficult ravines in life that don’t seem to have much light or many signs that God’s hand is moving upon our lives.

Lessons from the Life of Joseph

The heart is deceitful above all things, and desperately sick; who can understand it? (Jer. 17:9)

It may be hard to imagine wanting to kill or sell off your baby brother, but we are nonetheless full of pride, selfishness, anger, bitterness, and jealousy. We are bent on self-preservation, and before a holy God we stand with our own righteousness as filthy, vile rags. God chose to give us a glimpse of Joseph’s integrity more than his weaknesses, though he certainly had them. His life was riddled with broken promises, back-stabbing plans, and extended periods of waiting, but in the end, God positioned Joseph in a place where it was evident that his past sorrows were so he could play a pivotal role in the history of the nation of Israel. You have no idea how your present struggles are preparing you and how God will use them, even when it seems evil triumphs. When dealing with difficult people, remember that your heart is equally in need of the merciful grace of God.

2. Use what you are given to honor the Lord.

Whatever you do, work heartily, as for the Lord and not for men, knowing that from the Lord you will receive the inheritance as your reward. You are serving the Lord Christ. (Col. 3:23–24)

Joseph had every excuse to complain and give up. He could have easily blamed his circumstances on others and chosen a lifestyle of laziness or resentment. Instead, he served to the utmost of his ability in every single capacity. He was entrusted with a household, a prison, and eventually, all of Egypt. He had a progressive training, and none of it was wasted. Joseph recognized that all that he did would either sin against God or bring honor to Him. Even when no one is around, God sees all that you do. Honor Him with your attitude and a spirit of pleasing Him over yourself or others.

Let all bitterness and wrath and anger and clamor and slander be put away from you, along with all malice. Be kind to one another, tenderhearted, forgiving one another, as God in Christ forgave you. (Eph. 4:31–32)

If anyone had a reason to be angry and resentful, it was Joseph. Yet we do not read accounts of conversations he had while speaking ill of his brothers. Easily, Joseph could have unleashed years of pent-up anger upon his brothers when they appeared in front of him in Egypt. Contrarily, some of the most moving scenes in the Old Testament unfold as Joseph reveals his identity to his brothers. Moved with compassion, he assures them that he does not hold their actions against them, but rather, he encourages them to not even regret their past decisions! Joseph understood that God had orchestrated every bit of his life in order to preserve a remnant and save their lives. How rich is the grace that has been lavished upon you. No matter what has been done against you, what has been spoken about you, or the circumstances in which you find yourself, the position that you have in Christ is a result of God’s redeeming love. How then can you continue to harbor bitterness and a spirit of unforgiveness towards others when you have been forgiven for much?

4. God is outside of time or your timeframe.

Joseph was only seventeen when he was taken to Egypt. It wasn’t until he was thirty that he was made second-in-command of Egypt. About a decade later, he was reunited with his family. That’s a lot of years passing without Joseph knowing or reaching the beautiful end. Do not lose heart in your waiting. Be mindful of all that God is doing in your heart and in your life. Do not believe the lie of the enemy that time is passing you by, hope is lost, and you have been missed or overlooked by God.

5. Trust God with His plan for your life.

And he said to all, “If anyone would come after me, let him deny himself and take up his cross daily and follow me. (Luke 9:23)

Joseph couldn’t control where he ended up, but he chose to trust that all that he was doing was for something greater than himself. We often believe the lie that our life must look a certain way in order for it to be fulfilling or impactful. We are called to be servants and slaves to Christ. Our time on this earth wasn’t meant to look like moving from one pleasure to another, attempting to avoid anything that might cause us to suffer or know sacrifice. Rather, our lives are meant to be a lived-out, perpetual sacrifice offered to the Lord! God has a plan and purpose with all that He creates. When we are preoccupied with looking at what God is doing in the lives of others or fixated on what we want, rather than seeking God’s will, we miss the richness of a life poured out for His glory and good.

Like Joseph, you will face difficult people and challenging circumstances. There will be times when you feel adrift and uncertain of what God is doing. By placing your hope and your faith squarely in God, you are tethering yourself to the anchor that is secure.

Your story is His story. Your days are the days that He has written regarding your life. Submitting to His will, even when you do not understand, and even when it means suffering, waiting, and sacrifice is not only pleasing to the Lord, it speaks to those who are watching you.

Your relationship with God is intimate and His love for you abounding and immeasurable, and there is more to your days that you could ever know or imagine. How God is using you and your circumstances can only fully be known by Him. You will face countless attempts by the enemy to thwart, distort and distract. He wants to annihilate you as He did the seed for the Messiah.

But take heart, the Lord has overcome!

Previous Post God’s Providence: A Place of Rest!
Next Post Today Is the Best Day to Learn About Providence 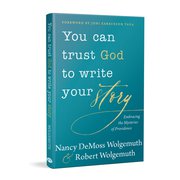