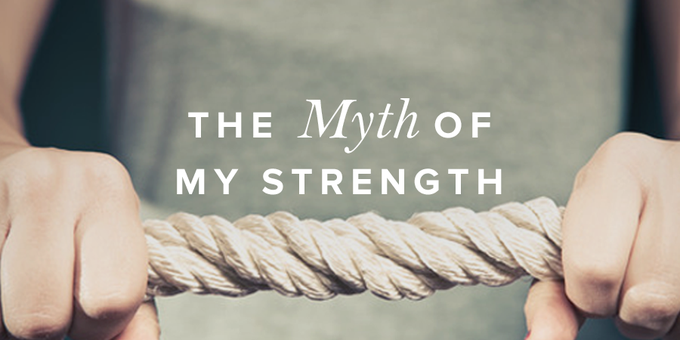 The Myth of My Strength

Do you think of yourself as a strong or a weak woman?

Personally, I've counted myself a strong one.

I was the girl who ran around flexing her biceps, challenging boys to arm-wrestling matches, and re-arranging my heavy bedroom furniture all by myself.

The Strong One is made weak so we, the weak, can be made strong.

"Even youths shall faint and be weary, and young men shall fall exhausted."

My doctor said I was strong to have made it as long as I did.

I wasn't so sure.

God, do You think of me as weak or strong? And how should I think of myself?

Taking Cues from a "Strong" Man and a "Weak" Man

I went to God's Word for answers, starting with the strongest man I could think of: Samson. You know the beast—tearing a roaring lion to pieces with his bare hands, striking down 1,000 enemies with a donkey's jawbone, pushing down a house killing 3,000 party-goers.

Here's the surprising pattern I found. Just before Samson displays great strength, this is what happens just before:

It was always God's strength Samson displayed; never his own. God is the strong One. Even Samson was weak apart from God.

I Am Weak, but He Is Strong

Funny how many times I've gotten it mixed up. I've considered myself strong and believed God to be weak. Nothing could be further from the truth:

"Have you not known? Have you not heard? The Lord is the everlasting God, the Creator of the ends of the earth. He does not faint or grow weary; his understanding is unsearchable" (Isa. 40:28, emphasis added).

God's strength will never, ever give out.

Me on the other hand, I'm weak. My strength is finite.

What freedom that realization brings.

Strength comes when we first own up to our own weakness. (That's 'cause we don't rely on God when we consider ourselves strong.) But in our weakness, as we depend on our strong God, His strength flows through to us. Catch Paul's personal testimony of this:

"We were so utterly burdened beyond our strength that we despaired of life itself. Indeed, we felt that we had received the sentence of death. But that was to make us rely not on ourselves but on God who raises the dead. He delivered us from such a deadly peril, and he will deliver us. On him we have set our hope that he will deliver us again" (2 Cor. 1:8–10).

And then there's my favorite passage from this past month,

"He gives power to the faint, and to him who has no might he increases strength. Even youths shall faint and be weary, and young men shall fall exhausted; but they who wait for the Lord shall renew their strength; they shall mount up with wings like eagles; they shall run and not be weary; they shall walk and not faint" (Isa. 40:29–31).

How is this strength-for-weakness exchange possible?

Strong Made Weak; Weak Made Strong

It's all because the Strong One was made weak so we, the weak, could be made strong.

Check out this baffling verse:

The weakness of God? But God isn't weak!

Study the context, and you'll see this verse refers to the cross. The world judges Jesus weak and pathetic, hanging there exposed and bleeding. "Weakness," they spit.

But to us who are being saved, we gaze at the cross and celebrate. "Strength!" we shout.

God refuses to save Himself so He might save us. The Strong One is made weak so we, the weak, can be made strong.

What weakness can you boast about today? How might God want to showcase His strength through your particular weakness?

I am weak, but He is strong.