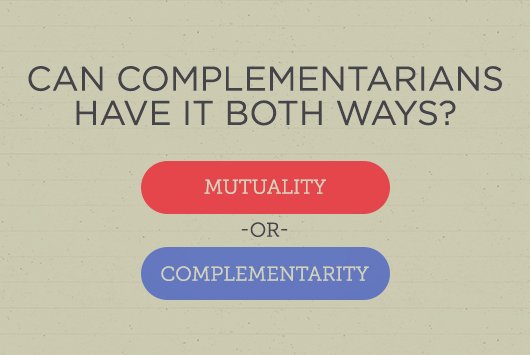 Can Complementarians Have It Both Ways?

FYI: This is Mary Kassian's second post in a three-part series on the complementarian view of male-female relationships—what it is and what it is not.

In the movie The Matrix, the main character, Neo, is offered a choice between swallowing a red pill or a blue pill. The blue pill would allow him to remain in the Matrix, an illusionary computer-generated world. The red pill would lead to his escape out of the Matrix and into the real world. It was an either/or scenario. He couldn't have it both ways.

Complementarity and mutuality are not either/or concepts.

The Evangelical world often frames the discussion about gender roles in "either/or" scenarios. Women are led to believe they only have two choices: They can choose to swallow the red pill of mutuality or the blue pill of complementarity—but not both.

I want to firmly stake the claim that complementarity and mutuality are not either/or concepts. The exact opposite is true. Complementarity embraces mutuality. Complementarians desire mutuality as much as egalitarians do. Our point of difference is not mutuality but rather our respective views on the means whereby this will be achieved.

The question is definitely not about which viewpoint upholds the dignity, honor, full personhood, and mutuality of woman. They both do. We merely disagree on the route the Bible says we must take to reach the destination. But this disagreement is no small matter.

Complementarians believe God created male and female to reflect complementary truths about Jesus. Role distinction and mutuality in a redeemed male-female relationship reflect characteristics of the Godhead and of Christ's relationship to the Church. Yes, practically, this involves males stepping up to the plate to head up both individual and corporate church families. But no, this doesn't logically necessitate wooden, unilateral relationships where men boss women around. On the contrary, complementarity solicits cooperation, togetherness, and mutuality. It calls for a profound reciprocity.

Instead of either/or, authors of the Bible acknowledge the both/and. When they discuss distinct male-female roles, they almost always frame up the conversation within the context of male-female mutuality. For example:

Complementarians ought to clearly acknowledge the "both/and" nature of complementarity and mutuality when we speak of gender roles. To fail to do this paints an incomplete picture. In male-female relationships, as in the Body of Christ as a whole, our differences ought to be the foundation and catalyst for a profound unity and mutuality.

Complementary and Mutuality in Marriage

In His Word, God has given us some sex-specific assignments. He instructs me to respect my husband as the team leader of our family unit. He instructs my husband to be a good leader—a self-sacrificial, loving one who looks out for the best interests of his wife and family. But He also gives us both a host of instructions about His expectations of everyone. Though we've been assigned different positions, there are many clear responsibilities my husband and I have toward one another as followers of Christ. They include the instructions to:

All of our common responsibilities are to be carried out in the context of relationships in which God has delegated some individuals—like the husband of each family unit—the additional responsibility to provide loving team leadership in his respective corner of the field (Eph. 5:21–32).

Yes, it's true that some Christian men don't take their assigned responsibility seriously. Yes, it's true that men fail. But the same could be said of women. When I read the list, I am conscience-stricken about my own short-comings.

The fact that some people don't carry through on the game plan doesn't mean the plan is a bad one. Nor does it mean we should hold a collective mutiny and declare a free-for-all. It just means we need to work harder to execute the game plan in the way God has designated.

The Dance of Complementarity