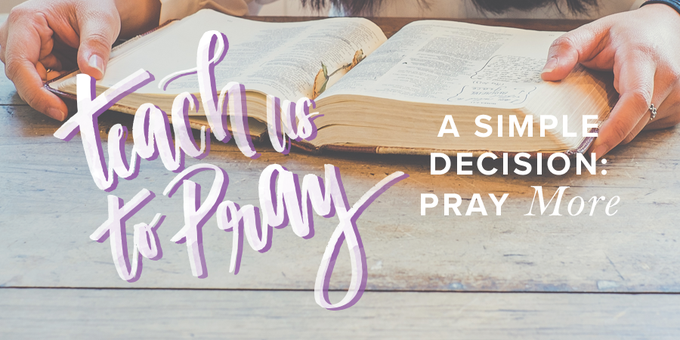 “Every significant life change begins with a single decision.”

Not too long ago a friend said this to me as almost a throwaway line. He went on to say something else, but I didn’t hear anything from that point on. Like the last time you walked into a closed sliding glass door (you have done this, haven’t you?), my brain came to a very abrupt stop. “Life change?” . . . I’m for that. “A single decision?” . . . I can do that, too.

In fact, I heard these words in 2012, at the time my life found itself in a serious crossfire. My wife was facing Stage IV ovarian cancer and my privileged role was to be her full-time caregiver. But this was brand-new and perilous territory for a broken and sinful man. I had walked nose-first into that invisible door.

In those days I knew one thing for certain: What I was facing was going to press me way beyond my capacities. This was far more challenging than anything I had ever dealt with before. So I made a single decision—I decided to pray more.

The operative word here is “more.” Growing up in a Christian home where prayer was practiced with sweet regularity, I had developed a fairly consistent habit of approaching the throne of grace on my knees as I saw my dad do many times. But as I faced the ominous possibility of shepherding my wife on this perilous journey, it was clear to me that “fairly consistent” wasn’t going to cut it.

The Example of Nehemiah

As it turned out, when I made this decision, I was in the process of teaching through the Old Testament book of Nehemiah. You may remember the story of this Hebrew captive serving in the courts of the pagan king Artaxerxes. Nehemiah went to the king requesting a leave of absence to coordinate the rebuilding of the broken-down walls surrounding Jerusalem. Actually, before he approached the king he made a decision—he prayed.

Like me dealing with a challenge far greater than anything I had known, Nehemiah realized that he didn’t have the skill or experience to speak to the king, not to mention asking for some time off and the actual task of rebuilding the wall.

So what did Nehemiah do? “I sat down and wept and mourned for days, and I continued fasting and praying before the God of heaven" (Neh. 1:4).

Don’t you love this picture? Faced with the news of his beloved hometown in ruins, Nehemiah “sat down” and prayed. He didn’t wait until the worship service on Sunday (or Saturday night) or alert his small group or even hit the speed dial to talk to his closest friend. He sat down. Right there. Right then. Nehemiah prayed.

Was Nehemiah already a man of prayer? Probably. He and his people had been captured by the Babylonians and dragged hundreds of miles from their homeland to be slaves. With historic visions of the Hebrews enslaved in Egypt, surely Nehemiah must have prayed. But this time, by this recorded account, he got serious. He decided to pray more. Doubtlessly more than he ever had prayed before.

One of my favorite parts of this story is that there’s no record to tell us that Nehemiah was already a leader. His decision to pray more wasn’t a fancy grandstand move in front of bunch of people. There was no one to impress. After all, Nehemiah served in the courts of the king as a wine taster. Seriously. That means that the fearful monarch suspected that someone might try to take him out by slipping a mickey into his merlot, so he had a full-time poison detector. Our friend Nehemiah was this guy. Low man on the totem pole to be sure.

But God called this human guinea pig to step up and lead his people in a huge construction project. Nehemiah was out of his league, and he knew it. And so he decided to pray. Likely pray more than he had ever prayed before.

A Decision with Many Rewards

This is my story. Almost five years ago, given the news that my wife was deathly sick, I made the same decision . . . to pray more. A lot more. And it’s safe to say that like a tsunami sweeping the shore, nothing has been the same.

In calling me to spend more intentional time in His presence, the Lord knew exactly what He was doing. The sequence of life changes since this decision are way too numerous to record here, but the result of my decision to pray more has brought me a reward—a joy—I could not have imagined. In fact, right in the middle of the storm, God brought me a friend—a woman named Nancy Leigh DeMoss—who also loved to pray. Lavish gift. Relentless mercy. Sweet grace.

With almost no exceptions, every day since this pray-more decision has begun on my knees. As I said, this was something my own dad did faithfully, and I had done once in awhile. But that wasn’t good enough. So I made a single decision that changed everything. I was going to pray more. Nothing fancy about this. Just an ordinary decision.

I also determined to never again be embarrassed about asking friends, family members, and complete strangers how I can pray for them. So I have had the privilege of ushering lifelong allies, my daughters, the UPS guy, and the rental car shuttle driver into the throne room of heaven.

Again, my buddy in this new adventure has been ol’ Nehemiah. I picture him, once he had arrived in his hometown, by himself in the silence of night, on horseback, clomping around the ruins of his beloved Jerusalem, crying out to God, “Lord, this city is a mess. Please give me wisdom and strength to lead and rebuild. I’m Your guy.”

Can’t you imagine the thought streaking through his mind as he quietly surveyed the ruins? I should pray about this. And so he did. A need. A decision. A prayer. And Nehemiah’s heavenly Father listened. And answered. The result was a strengthened man, a faithful construction team and, in spite of life-threatening resistance, a freshly-minted wall.

I have no way of knowing where you are on your spiritual pilgrimage. But I can promise you that when you make the decision to pray more, you will experience the same. A newfound strength. Fresh courage. A confidence in your Good Shepherd’s leading. Can you think of any reason why you wouldn’t do this? I can’t either.

Robert Wolgemuth is the author of over twenty books. His next book, scheduled to release on March 27, 2017, is called Like the Shepherd: Leading Your Marriage with Love and Grace. Right now Robert is selecting 200 women to join his official “Launch Team.” Between now and the book’s release, you’ll have a chance to pray for the process, review the manuscript, give input on the cover design, share marketing ideas, hear from Robert on a regular basis, and receive a signed copy of the finished book to give to your shepherd. If you’re interested, text the word, “shepherd,” space, and then your email address to 95999. (For example, “shepherd janedoe@gmail.com.”)

Previous Post Too Busy for a Prayer Life?
Next Post The Whys and Hows of Praising the Lord