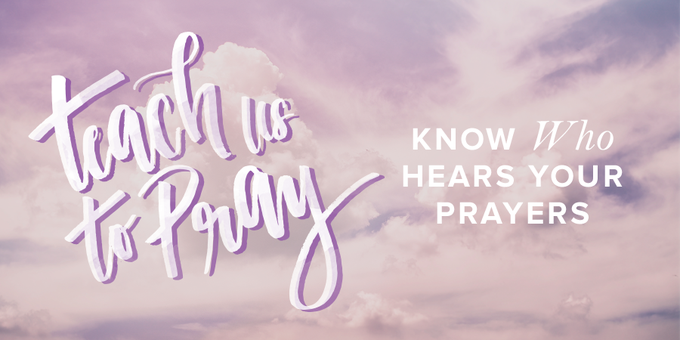 "I just can't get into a habit of prayer. I don't really know how to pray, and it doesn't feel like anyone is listening anyway."

I've heard this from so many Christian women, and I'll be honest and admit that I've said things like this myself. Prayer can seem so difficult, even for those who truly love the Lord.

We're told to draw near to the throne of grace with the confidence of a child of the King, but we often drag our feet like a troublemaker being summoned to the principal's office instead. That's why it's crucial we understand who hears our prayers. James 4:2 says, "You do not have, because you do not ask." Perhaps one reason we hesitate to ask is because we don't truly understand who we're asking.

In John 4, we read the familiar story of Jesus talking to the woman at the well. Jesus was resting beside the well while the disciples went into the town to get food. A woman was there, alone in the heat of the day, drawing water. Jesus asked her for a drink, and she was amazed that a Jewish man would break several cultural taboos and ask a Samaritan woman for a drink. He answered her:

"If you knew the gift of God, and who it is that is saying to you, 'Give me a drink,' you would have asked him and he would have given you living water" (v. 10).

I think the same could be said to many of us. If we truly knew who it is that tells us to come to Him, we would never hesitate to do so.

So who is this God to whom we pray? He is infinite, beyond our comprehension, but let's look at just a few of His attributes and see how it affects our prayer lives.

The Just and the Justifier

For all have sinned and fall short of the glory of God, and are justified by his grace as a gift, through the redemption that is in Christ Jesus, whom God put forward as a propitiation by his blood, to be received by faith. This was to show God's righteousness, because in His divine forbearance he had passed over former sins. It was to show his righteousness at the present time, so that he might be just and justifier of the one who has faith in Jesus (Rom. 3:23–26).

We rightly acknowledge the truth that God is holy and just, and we are sinners—a knowledge that may contribute to some of our timidity in approaching Him. But when we forget that the Just is also the Justifier, we fail to see the whole picture of God.

God cannot tolerate sin in His presence, but for the Christian, He has become the Justifier. This means that through the work of Christ in His perfect life and death on the cross, He has done what was necessary to declare us innocent of all our transgressions. He is still just, because our sins were punished. And He is the Justifier, because He is the One who made it possible for our sins to be punished yet also for us to be called "Not Guilty." This is extremely important as it relates to our prayer lives.

If we don't fully grasp the fact that He has justified us, then we will have no confidence at all when we approach His throne. We will have no desire to come to Him. It will be something we know we're supposed to do but not something that brings us joy.

Daughter of God, your sin no longer keeps you from God's presence. God's wrath over sin was poured out on Christ. Fully. There is none left for you who are hidden in Christ. The curtain has been torn in two, and you now have access to the Holy of Holies. If God has redeemed you from your sin, then He no longer looks at you as covered by sin. He looks at you as covered by the blood of His Son, and grants you full access to Him. Come to Him broken over your sin, confessing it and repenting, but never let your sin keep you from coming to Him at all.

For all who are led by the Spirit of God are sons of God. For you did not receive the spirit of slavery to fall back into fear, but you have received the Spirit of adoption as sons, by whom we cry, "Abba! Father!" The Spirit himself bears witness with our spirit that we are children of God, and if children, then heirs-heirs of God and fellow heirs with Christ, provided we suffer with him in order that we may also be glorified with him (Rom. 8:14–17).

God doesn't just justify us, declaring us not guilty, and then send us on our way as an earthly judge will do. He does something mind-boggling—He adopts us as His daughters! Adoption on earth means that the adopted child now has every legal right and benefit that a biological child would have, and adoption in heaven means the same thing.

Let that sink in for a moment. The begotten Son of God is Jesus. When God adopts us as His daughters, He promises to love us with the same love He has for Jesus. He promises us the same inheritance that belongs to Jesus. He is now our loving Father. This means that He is available. And better than an earthly father, He never has to say, "Hang on, I'll help you in just a minute." He is always available, ready to hear the cry and meet the needs of every one of His children at the same time. He loves to give us good gifts, and the best part is that He actually has the resources to give us every good thing.

It also means that since the King is our Father, we don't have to worry about using formal language or wording our prayers exactly right. He honors the faith behind the simplest prayers, and He promises to respond to every one. Do not relate to God as if you were an orphan. If by faith He has justified you, then you are an adopted daughter, and He loves you as He loves His Son. His arms are open wide, and He stands ready to hear our broken prayers.

These verses are often quoted, but it's helpful to stop and really think about what they mean. Many times we hear "all things work together for good," and we think it means "all things are good." That's why this verse hurts so much when quoted to people who are suffering from something they know is not at all good.

But Paul doesn't say all things are good. He says that our God, our Father, is sovereign over all things and masterfully weaves together every good and evil act to accomplish an ultimate good. Nothing is out of His control. The wisest and most compassionate ruler on earth still cannot control everything that happens in his realm, but God can and does.

We can come to the one who has justified us and adopted us and pray with confidence, knowing that He can indeed do all things and work out all things for His good purposes. We ask in faith with no doubt, and we ask with open hands, saying, "Not my will but Yours be done." But we ask. And we don't stop asking until we see His answer.

Meditating on these truths about who God is can help us approach His throne with new confidence. So then how should we pray? First, just pray. Stop putting it off. Stop worrying about not being good enough. Just pray. And keep praying. Don't pray once and then give up. Keep praying and praying until you have an answer.

Let Scripture shape your prayers. Use lists or cards if that is helpful to you.

Pray in the moment. Many times someone asks for prayer but then we forget, so start praying for a need right when you hear about it. Pray always. You don't have to confine your prayers to your set quiet time in the morning. Pray all through the day, as needs arise or worries threaten or you need strength. Our access to the throne is always open. We can camp out there all day long, even as we are outwardly going about our routine.

Has prayer been a struggle for you? Have you felt reluctant to pray, knowing how sinful you are? Have you been unsure whether you will be received by the King? Have you been afraid to pray for big things? How can soaking in the truth of who God is help you as you think about your prayer life? I challenge you to test Him in this, approach the throne of grace with confidence, and watch as He transforms your life.

Want to pray for your nation but don’t know where to start? Sign up for this forty-day email series and get guidance and practical tips for how to pray for America.
Previous Post Take Your Prayer Life out of the Box
Next Post Me . . . Pray With Others?