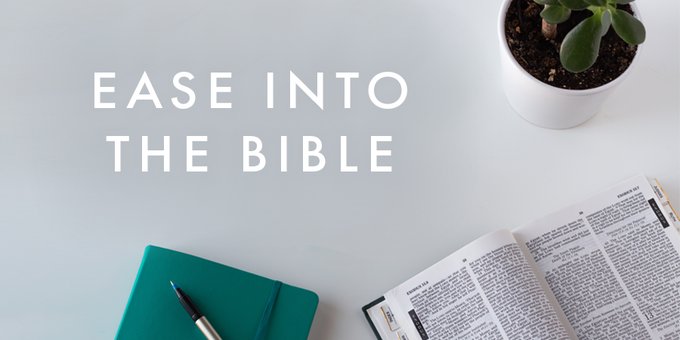 Five years later, Christ gave my mom spiritual sight to see the truth of the gospel and the faith to believe. She then urged me numerous times to study the entire Old Testament so I could better understand the New.

Mom was right. (This time.) The Old Testament is the foundation we need to properly understand the gospel and the New Testament.

The Old Testament takes my breath away with its rich truths and Christ’s presence woven through its pages. It also convicts me of my sin. (I see myself in the wandering Israelites too well.)

When I read all the Old Testament requirements that God’s people had to follow to receive temporary forgiveness for their sin, I marvel at the simplicity of the gospel, at Christ’s once-for-all sacrifice (Heb. 10:1–18). I’m astounded that “It is finished” (John 19:30). And I thank God for creating and saving me on this side of the cross.

Understanding the Old Testament deepens our love for the gospel more than a thousand readings of the New Testament alone.

Both testaments are arranged according to the main form of literary genre they contain.1 In this article, we’ll look at the five main categories in the Old Testament.

The 5 Divisions of the Old Testament

The first five books of the Bible recount historical events which include God coming down in fire on the mountain to give His people His law (Ex. 19–20).

Collectively, the books are called “the Pentateuch” or the“Law of Moses.” (It’s really God’s law, but God gave it to Moses, who wrote it down.) The Jews call these five books the Torah, which means “law.”

The Pentateuch (and Bible) opens with the historical account of creation after which God gave mankind one law: don’t eat the fruit from the tree of the knowledge of good and evil—or you will die (Gen. 2:16–17).

One simple law wrapped in a serious warning. But Adam and Eve couldn’t keep this one law.

Over time, God gave Moses and the people of Israel more laws—613 commandments (as many scholars count them). Imagine trying to keep 613 rules when we can’t even keep God’s top ten (Ex. 20:1–17). God’s holy law prepared the world for Jesus because it revealed the dire truth—no one born of man can ever perfectly keep the whole law.

We learn in the New Testament that God never designed His law to make men worthy of heaven but to show us our utter unworthiness and inability to live righteously before a holy God. “The law, then, was our guardian until Christ, so that we could be justified by faith” (Gal. 3:24).

The authors of these twelve books chronicled the storied history of Israel with its rise and fall of kings, particularly David, and a few nasty queens. (Ever heard of Jezebel? Not a nice lady.)

These history books tell the glorious results when God’s people love Him with all their heart, soul, mind, and strength. They also tell the tragic consequences when they turn away from Him, the One true God, to run after false gods. (Hint: It ends terribly. Every time.)

King David, his son Solomon, and the other authors of the wisdom and poetry books often wrote in poetic form to help us better understand spiritual truths. These truths help make us wise, which leads us to obey the Lord and trust in Him.

It’s best to read the passages in these books as expressing a literal meaning unless the language within their literary structure reveals that the author was being poetic. In Psalm 78, the Psalmist wrote a powerful (and literal) account of God’s mighty works among His people. But in Psalm 23, King David used beautiful imagery to help us understand that the Lord is good to us like a good Shepherd who leads His beloved flock.

God’s prophets authored the last two divisions. Prophets were God’s special spokesmen. They acted as preachers of God’s Word, proclaimers of truth, predictors of the future, and watchmen over the lives and hearts of Israel. They warned the people of danger and pointed them to the coming Savior—and were often persecuted and killed for their faithfulness to God.

The five Major Prophets weren’t more important than the twelve Minor Prophets. They’re major because they wrote longer books. Isaiah has sixty-six chapters. Jeremiah has fifty-two. The prophet Jeremiah also wrote the small book of Lamentations. It only has five chapters, but since Jeremiah wrote it, it gets to live with the Major Prophets.

The twelve Minor Prophets are little books with big messages. Obadiah has only one chapter. Many, like Jonah, contain some of the clearest pictures of Jesus.

Each warned Israel to follow the Lord, revealed the consequences of rebelling against Him, and displayed God’s perfect character that spans the matchless breadth from His unbending holiness to His merciful grace.

The Old Testament from Beginning to End

In the beginning, God spoke, and in His speaking, He laid the foundation for the rest of the Bible.

In the beginning God created the heavens and the earth.

By His Word, God revealed the truth of who He is—the Almighty Creator and sovereign Ruler of heaven and earth who fills all with His perfect blessings.

God ended the Old Testament by speaking again. Through the prophet Malachi, God spoke of His law and of a curse. He also spoke of the Curse-Breaker, Jesus Christ, and His two separate comings.

“Remember the instruction of Moses my servant, the statutes and ordinances I commanded him at Horeb for all Israel. Look, I am going to send you the prophet Elijah before the great and terrible day of the LORD comes. And he will turn the hearts of fathers to their children and the hearts of children to their fathers. Otherwise, I will come and strike the landwith a curse.” —Malachi 4:4–6

Israel thought the Savior would come with salvation once. God’s people didn’t know their Messiah would first come as the Merciful Savior, and then later in the end times as the Righteous Judge.

After Malachi, God’s people had to wait four hundred years before the next biblical author picked up his stylus and began to write. In what scholars call “the four hundred years of silence,” God prepared the world for the New Testament.

I praise God that He gave my mom spiritual eyes to see the truth of the New Testament gospel of Jesus Christ. And that she urged me to study the Old Testament, which first proclaimed the gospel that also saved me. If you haven’t read all thirty-nine Old Testament books, let me urge you to start today.

The New Testament tells the rest of Christ’s glorious story of redemption. In our next article, we’ll look at the five divisions of the twenty-seven New Testament books and letters.

Where do you run when you’re looking for comfort? For over 400 years, Christians around the world have clung to the answer to this question in times of joy and peril: What is your only comfort in life and death? Now you can share with others the answer to the first question of the Heidelberg catechism—and be reminded of it yourself—with this set of 12 identical “Christ Our Comfort” cards from Revive Our Hearts.Request your set when you make a donation of any amount today.

Previous Post It's Heaven Because Jesus Is There
Next Post When City Gates Crumble: An Urgent Call for Women to Pray