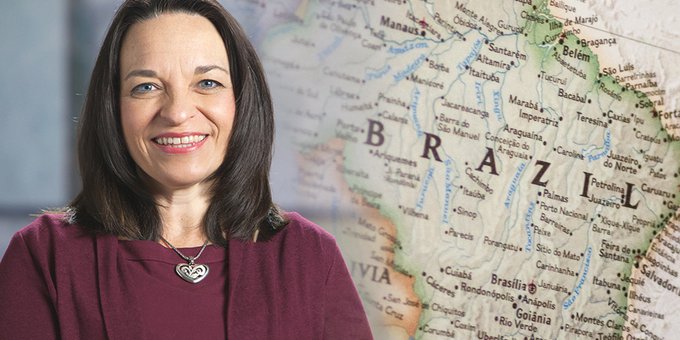 This past December, long-time Revive Our Hearts ministry friend Cindy Rast went to be with the One her soul most loved after a four-year battle with brain cancer.

Cindy spent the last twenty-two years of her life serving as a missionary in São Paulo, Brazil. While God used her mightily there, He had another job for Cindy to do in the later years of her life.

In 2012, the Holy Spirit moved profoundly in Cindy’s heart as she studied True Woman 101. After completing the first week of homework and watching the accompanying video, Cindy and her friends dropped to their knees in confession. Over the next few weeks, the Lord continued a sweet work of repentance in them.

For months after leading that study, Cindy pondered how she could spread this message to Brazilian women everywhere. But she always came back to asking, Who am I? My Portuguese isn’t even that good. What can I do?

Still, she led group after group through True Woman 101 and saw the same astonishing results. Women were starving for this truth, and the Holy Spirit was transforming lives right and left.

At that moment, Cindy realized, This message is in all of Latin America except for Brazil! She fell to her knees, weeping, “God, what do You want? I don’t have anything to offer.”

God began to bring to mind a few connections she had. So with trembling fingers, Cindy picked up her phone and began making calls. As the publishing wheels began to turn, Cindy formed a small group of women who pleaded with God to spread the gospel message everywhere Portuguese is spoken.

In 2015, the True Woman 101workbook and video messages were released in Portuguese. To this day, Cindy’s friends continue to hear of Bible studies springing up in every region of Brazil, in remote areas along the Amazon River, and even in Portugal. Cindy’s legacy continues, as lives all across Brazil—a country where the evangelical church numbers more than 40 million people—are being transformed.

Will you pray that God will continue to multiply the kingdom work He began through Cindy? Please also keep Cindy’s sweet family in prayer as they ache over her loss. She is survived by her beloved husband, Joel; their three children, Grace (and husband Jason), Alex, and Christian; and a grandson, Lucas.

You can catch more details of Cindy’s story on this episode of the Revive Our Hearts podcast.

How God Is Using One Woman to Reach Brazil