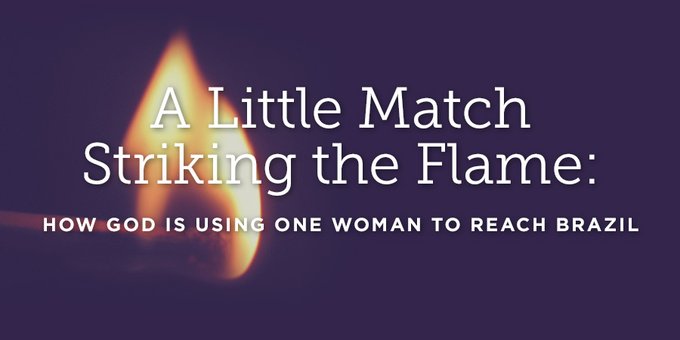 How God Is Using One Woman to Reach Brazil

In 2012, after completing the True Woman 101 study with three other women, Cindy Rast—a missionary in Brazil—just knew Brazilian women needed to hear this message. For months she thought about how to spread it to women in Brazil, but she always came back to, What can I do?

Still, she continued to lead group after group of women through True Woman 101—American women, Brazilian women; older women, younger women; divorced women, married women, single women—and she saw the same results over and over. Women were starving for this truth.

This message is in all of Latin America except for Brazil! "God, what do You want? I don't have anything to offer."

"We've let the world define us for so long, but when you look at the Word and see your Creator's design, there's something so affirming and beautiful," she told me. "It's not just someone's nice idea. It's what the Creator is saying! There's the power."

One day in December 2013, as Cindy was sitting down to lunch, she turned on Revive Our Hearts and heard Laura Gonzalez de Chavez sharing how God made her dream of starting Revive Our Hearts in Spanish a reality. As Cindy listened she thought, This message is in all of Latin America except for Brazil! She got on her knees, weeping, and cried out, "God, what do You want? I don't have anything to offer."

But then God began to bring to mind her connections . . . at TransWorld Radio, at the audio-visual company where her father-in-law serves as president, and more. So with trembling fingers, Cindy picked up the phone and left a message at Revive Our Hearts, sharing her passion. They're going to think I'm a crazy lady! she thought.

When she hung up with Revive Our Hearts, she contacted Shedd Publishing and told them how much True Woman 101 had transformed her life. They don't usually publish Bible studies, so they had no idea how consumers would respond. But after thinking about it for several months, in April 2014 they agreed to publish the workbook in Portuguese.

"The Lord has done everything," Cindy told me. "You wouldn't know it, but I'm a high-functioning introvert. He's impressed on me, 'You be obedient, and I'll do the work.' It's like this gear that has been greased so well and moves without any difficulty!"

Cindy believes the Lord will raise up a team of Brazilian women who are passionate about spreading this message. "I'm just the little match that's striking the flame," she told me.

Burn on, Lord, until every woman in Brazil has a chance to hear Your beautiful design for her life!

Partner with True Woman/Revive Our Hearts to give women around the world the opportunity to hear about God's beautiful design for their lives.

Previous Post Antelope Hunting: How Loneliness Makes Us Vulnerable to Sin
Next Post When You Think Feminism Isn't Affecting You

How God Used One Woman to Reach Brazil