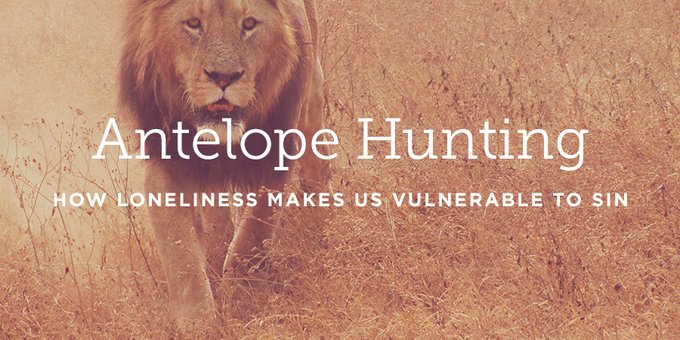 Antelope Hunting: How Loneliness Makes Us Vulnerable to Sin

A herd of antelopes grazes together on an African plain. There are so many of them that they are calm and relaxed, drawing a false sense of security from their numbers. They do not scan the horizon for predators. No one stands guard. They simply eat in peace.

But look closer. Something is lurking in the tall grass.

A pride of lions is moving forward. Slowly. Meticulously. In military-like formation. They make a wide circle. Soon, they will have the herd of antelopes completely surrounded.

When we step outside of community, we become significantly more susceptible to temptation and sin.

Suddenly, one female lion gives the signal the others have been waiting for. The pride stands up in unison and starts running. The antelopes dart. A planned confusion results, and the lions work together to isolate a single doe. Then they move in for the kill and drag their prey off to the shade to be shared by the pride.

It's a scene that most of us will only ever observe on Animal Planet or the National Geographic channel. But you might be surprised how much a pride of lions hunting their prey can teach us about one of the root causes of loneliness.

Every time a lion pride hunts together, it is a lightly organized operation. They do not test their potential prey for weakness like other predators do. The only weakness they are looking for is isolation. If they can remove a single animal from its herd, lunch is easily delivered, even if the animal they are hunting is much larger or faster than the lions themselves.

Where do you see yourself in the lion-hunting scene I just described? Are you the lion? Confidently stalking your prey? Are you standing on the sidelines somewhere with a telephoto lens?

The truth is, you are the antelope. So am I. Because we are all made weak and vulnerable by isolation. We may be living life, oblivious to the threat, just like the antelopes who thoughtlessly munch on grass while a lion lurks just feet away. But the threat is there, and it is real.

First Peter 5:8 puts it this way, "Be sober-minded; be watchful. Your adversary the devil prowls around like a roaring lion, seeking someone to devour."

Staying disconnected has the power to do much more than simply make us feel lonely. It may just be what the enemy uses to prey upon you and bring you down.

Back to the Garden

Let's head back to the Garden of Eden to take a look at exactly how isolation led to the fall of all mankind.

In Genesis 3:2–5 the serpent, who likely had been lurking in the grass for a while, sees his opportunity to deceive God's children and moves in for the kill.

"And the woman said to the serpent, 'We may eat of the fruit of the trees in the garden, but God said, "You shall not eat of the fruit of the tree that is in the midst of the garden, neither shall you touch it, lest you die.'" But the serpent said to the woman, 'You will not surely die. For God knows that when you eat of it your eyes will be opened, and you will be like God, knowing good and evil.'"

I believe Satan was hunting Eve. He waited for a moment when she was not surrounded by her community. Verse 6 tells us that Adam was nearby, but maybe he was just slightly out of earshot. And even if he wasn't, Eve apparently didn't take the time to talk to him about what was happening. We see in her the very first woman with an independent streak, as she determined that she would process the information Satan was giving her and make the decision all on her own.

Would things have turned out differently for Eve if she had simply said, "Let me talk to my husband about it" before taking a bite of that rotten fruit? Certainly, she would have been double protected against this attack if she had talked to her husband and consulted with God. God had given her a double-layered safety net through a relationship with Him and a relationship with Adam, but she cut right through the net and put herself in grave danger by deciding to go at it alone. What happened next reminds us that we are all daughters of Eve.

"Then the eyes of both were opened, and they knew that they were naked. And they sewed fig leaves together and made themselves loincloths. And they heard the sound of the Lord God walking in the garden in the cool of the day, and the man and his wife hid themselves from the presence of the Lord God among the trees of the garden" (Gen. 3:7–8).

Loneliness set Eve up to sin. Then her shame led to even deeper isolation.

Here's the big takeaway: When we step outside of community, we become significantly more susceptible to temptation and sin. In this way, loneliness is less of an emotion and more of a military strategy effectively used by our enemy. Then, our shame lies to us and tells us that isolation is the only way to regain control. In this way, loneliness and shame become a two-edged sword that is very effective at takings us out at the knees.

A Church at the Stadium

Researchers recently surveyed those who regularly attend church services to get a feel for their experiences.

Sixty-six percent of the people they talked to said that they feel they have a "real and personal connection" with God while attending church. That's good! Safety net number one is in place for most of us.

However, the study also revealed that our second layer of defense is tattered. More than a quarter of those surveyed agreed with the statement that church feels "like a group of people sharing the same space in a public event but who are not connected in a real way." Another nine percent of those surveyed weren't sure if they were connecting to others in their church or not. I have to wonder if the people in this group know what connectedness feels like or if they've settled for a synthetic substitute.

What people were saying is that for them church feels like going to a football game. The stadium is packed. They are surrounded by people who all want the same thing. The mood is light, but they are not really connected. At the end of the service, they will go back home to their lonely lives with the same sense they could never tell what's really going on.

I think this trend is less a reflection on the state of our churches, and more evidence of a personal problem. As individuals we refuse to get real about our sin. We want to keep up appearances. We want people to think we're really good people. We prefer to think of church as a country club where we wear our best clothes, including a pretty mask, instead of a hospital where we can get bound up and healed through the loving care of others.

Refusing to tell your sin to others will keep you an antelope until you return to your community.

That kind of thinking will get us isolated from the herd every time. Sure, antelopes are pretty. People like to look at them, but they are easy targets because they are quickly separated from their community. Refusing to tell your sin to others will keep you an antelope until you return to your community.

Are you lonely? If so, is it possible that sin is the root cause? Can you look back and see that Satan waited for moments when you were outside your community? He attacked and then he lied to you and told you shame should banish you to the bushes, making you feel even more alone.

It's time to fall into your safety net. Seek God, and ask Him to reveal the sin in your life. Confess it to Him right then and there. Don't hide yourself or your junk. But don't stop there.

Tell your Christian friends. Tell your pastor. Tell your mentor. Tell your family. Keep telling until you see the lion pride slink away and set their sights on a different antelope.

Note: Much of this post was taken from my latest book, I'll give away a copy to one of you who leaves me a comment sharing how isolation has impacted your faith.

The Misfit Mantra: "I Just Don't Fit In"

Connected: Curing the Pandemic of Everyone Feeling Alone Together