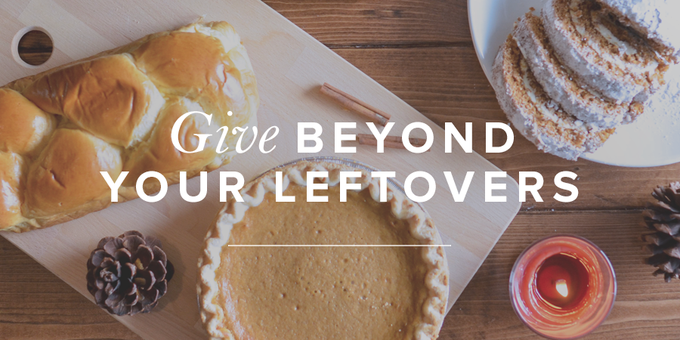 One of the most enjoyable things about Thanksgiving dinner is the leftovers I am sure to eat over the following days. There’s usually an abundance of food to stuff into the refrigerator because we make more than enough of our favorite holiday dishes. After reading the story of a poor widow’s offering in Mark 12 recently, I began to consider the idea of leftovers. What about the leftovers in my own life? I wonder if I’m giving God my feast or my leftovers.

Jesus talked to His disciples about leftovers. He was watching people in the temple give their offerings. He observed many rich people giving lots of money, and then He noticed a poor widow who gave two small, copper coins—basically a penny. He called His disciples to Him and said, “Truly, I say to you, this poor widow has put in more than all those who are contributing to the offering box. For they all contributed out of their abundance, but she out of her poverty has put in everything she had, all she had to live on” (Mark 12:43–44).

Giving Out of Our Abundance

The rich people gave out of their abundance. They had so much wealth, they could give large sums of it away, but it didn’t cost them anything. They sacrificed nothing. They kept their best for themselves and gave their leftovers to God. Are we guilty of the same?

When we give out of our abundance, it is often easy and the sacrifice is minimal. We are blessed monetarily. We have the ability to enjoy indulgences ranging from Netflix to Disney World trips. I like my own indulgences just as much as the next person. But every dollar I spend on them is money not spent on building God’s kingdom and aiding the poor. Am I spending more to indulge myself than to support the spread of the gospel? Russell Moore recently tweeted, “When one doesn’t need indulgences anymore, that frees up some disposable income for missions.”

Are we like the rich that Jesus noticed in the temple that day, giving lots of money but only giving our leftovers?

Giving Out of Our Poverty

The rich people gave a lot, but Jesus said this poor widow “put in more.” Jesus saw her penny as more valuable than their riches. This is encouraging for those who don’t have a lot of money to give. Our Father knows our hearts and sees the true value of what we give to Him.

The poor widow gave out of her poverty. Do we? Giving out of our poverty means knowing that we have nothing to offer God; we give back to Him what He’s already given to us. It’s His money, not ours. We are the stewards of His resources, not the owners.

When we see our resources as God’s, it frees us up to give like the poor widow gave, to give everything. We can say, like David said after collecting the people’s offering to build the temple, “But who am I, and what is my people, that we should be able thus to offer willingly? For all things come from you, and of your own have we given you” (1 Chron. 29:14).

I want to put in more. I want to give like the poor widow and the impoverished church. They gave out of their poverty. They gave everything. They gave more.

Recognizing Our Poverty, Even in Our Abundance

It’s difficult to see our own poverty while we’re living in abundance, and most of us are. We must remember that it’s all His. God’s Word says everything we receive is from Him (1 Cor. 4:7). “The LORD makes poor and makes rich; he brings low and he exalts” (1 Sam. 2:7). It is only by God’s grace that we have the resources we do.

In 1 Timothy 6:18, God tells those with resources in abundance to “do good, to be rich in good works, and to be generous and ready to share.” Giving generously means giving more than we’re expected to. When was the last time you gave more to support the work of missionaries, helped a needy family in your local church, or helped fund an adoption? When was the last time you gave beyond the expected ten percent tithe to your local church?

If we want to be serious about making disciples of the nations (Matt. 28:19), we’re going to have to examine our spending priorities. We’re going to have to assess where we are investing our first fruits as well as our leftovers. We need to ask God to tune our hearts to give unexpectedly and sacrificially.

God is our example and we want to give like He gave—like He still gives. God gave sacrificially to us by giving His Son. His generosity came at a high cost. He gave so sacrificially because of His great love for us. For God so loved, He gave (John 3:16).

Missionary and orphan caretaker, Amy Carmichael, said, “You can always give without loving, but you can never love without giving.” If we truly love our neighbors, from next door to the next tribe, we will give so that they might be a part of God’s family. We will give sacrificially to see that people from every tribe, tongue, and nation (Rev. 7:9) hear the gospel.

Why would we give up our comforts and indulgences? Because we love the kingdom of God and see it as more valuable than our own.

Giving sacrificially means we give up something for the sake of something else we see as more valuable. Maybe this means you only take a vacation every other year to be able to support a missionary on the field. Perhaps you give up cable television so that your family can support people working to translate the Bible into different languages.

Why would we give up our comforts and indulgences? Because we love the kingdom of God and see it as more valuable than our own.

The rich left the temple that day with plenty after giving God their leftovers. The poor widow left with empty hands after she gave God her best. St Augustine said, “God gives where He finds empty hands.” This holiday season, as we are surrounded by our abundance, may God find our hands, like the poor widow’s, empty, because we’ve given Him everything. And may we receive our Father’s love and thank Him for the good gifts He places in our empty hands (James 1:17).

Previous Post On Marrying Later, God’s Gift of Words, and Loving the Vulnerable
Next Post This Christmas, Empty Yourself