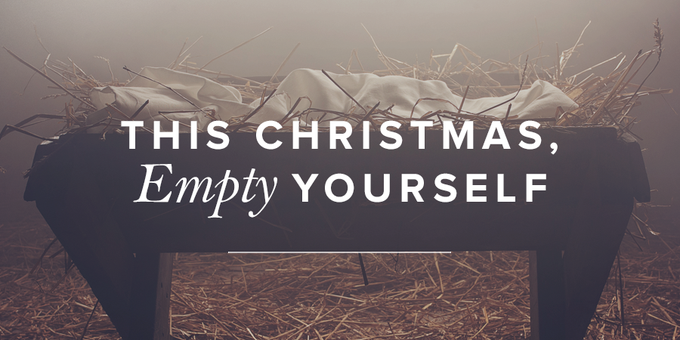 This Christmas, Empty Yourself

I adore babies, but I can’t imagine becoming one again. How would it feel to not be able to hold my head up? To need diapers and be strolled about? To be spoon-fed mushy carrots and applesauce because I had no teeth?

Obviously none of this will be too far-fetched once I approach life’s final season, but would I choose it? Would I ever volunteer to become needy and weak, dependent on someone else to wipe the drool from my face?

It’s astonishing to me that Jesus volunteered for exactly this. And He did so not as a man but as God.

Try to imagine the President of the United States or the leader of China or Russia giving up his ability to reason, dress himself, or walk independently. It would be unthinkable for such powerful men to voluntarily stoop to helplessness! Yet even in their height of power, these world rulers aren’t endowed with even a fraction of the intellect, wisdom, power, wealth, or creative capacity possessed by King Jesus.

For Jesus, there is not one Hubble photograph that reveals something unfamiliar. No research study ever proves something He didn’t know. There will never be a mathematical, scientific, or psychological discovery that did not first originate with Him. No advancement will ever seem groundbreaking to Jesus, because He had it all in mind when He first spoke our universe into existence.

During His last Passover, Jesus set aside His humble, Nazareth-spun garments so that He could more easily bend down to wash the dust and grime from His friends’ feet (John 13:12). The disciples were shocked. Yet they didn’t realize what a small gesture this was, in proportion to the ways Jesus had already humbled Himself.

Jesus set aside His heavenly robes and crown and tucked Himself into human flesh. He veiled His grandeur so that He could blend into crowds and start conversations about His Father (Heb. 10:19–20). He masked His majesty by taking the role of a servant (Phil. 2:7).

Suppose the opposite had occurred. What if Jesus had come—not as a baby—but lowered on a cloud from heaven? Picture Him descending to the dusty streets of Galilee with His face shining as bright as the sun and His clothes the color of a streak of lightning. Picture the angel choirs heralding His arrival from behind Him, singing, “Glory to God in the Highest!”

He Came So He Could Die

When Peter, James, and John caught a glimpse of the transfigured Jesus, they immediately wanted to worship Him (Matt. 17:1–3). So it seems to me, this would have been a good way for Jesus to make His debut in Bethlehem. He could have avoided all of the misconceptions about Him not being God. He could have put those Scribes and Pharisees in their place! And ultimately He could have avoided death on a cross.

Instead, Jesus became a baby precisely so that He could be placed on a cross. Philippians 2:6–8 says:

Though he was in the form of God, [Jesus] did not count equality with God a thing to be grasped, but emptied himself, by taking the form of a servant, being born in the likeness of men. And being found in human form, he humbled himself by becoming obedient to the point of death, even death on a cross.

Because Jesus is so glorious that He deserves constant worship, His display of humility is infinitely significant and beautiful. He didn’t become less great when He folded Himself into Mary’s womb. Rather, stooping low to become a servant only amplified His greatness even more.

This is true for us as well. When we set aside egos or privileges and choose to serve rather than be served, we become more honorable, not less.

How unfitting, then, when I make Jesus’ birthday a celebration that inflates myself. How inappropriate when I arrogantly forget about the King who became a baby and use His birthday to serve my own ego.

Now, I don’t set out to hijack Christmas, but somewhere in the chaos of shopping, wrapping, and baking, my motives can subtly shift. What began as a desire to serve, share, and give becomes tainted with a desire to self-serve, receive, and get. Such as . . .

In all of these ways I’m trying to fill myself with status, rather than emptying myself of it.

What would it look like to appropriately celebrate the day the King of Kings humbled Himself and became a baby? What would Christmas be like if we—as women—took the form of a servant, the way Jesus did? How would a mindset of humility, which is ours in Christ Jesus (Phil. 2:5), change the way we approach December this year?

Perhaps we would quietly hang ornaments, frost cookies, and wash the floor without grumbling about how busy we are. Maybe we would be less fixated on finding the perfect, squeal-inducing gifts and more content to invest time in the people we love. Perhaps we would enter each party and gathering saying, “How can I serve someone here? How can I set aside my own status and lift others up?” Maybe instead of insisting on our own plans and traditions, we would concern ourselves with honoring others’ wishes.

Now, celebrating Christmas humbly doesn’t necessarily mean we won’t spend money, decorate, or plan fabulous parties. “Emptying ourselves” doesn’t mean that we stop doing the things we’re good at or deny that we have gifts and resources. When Jesus emptied Himself and became a servant, He never denied that He was God’s Son or that He had authority and power. He didn’t disclaim His greatness; He just used it to lift others up.

This Christmas, how will you tuck everything that you are and have into the form of a servant? How will you celebrate the birthday of a baby-King by lifting others up?

Free Yourself to Focus on Christ This Christmas