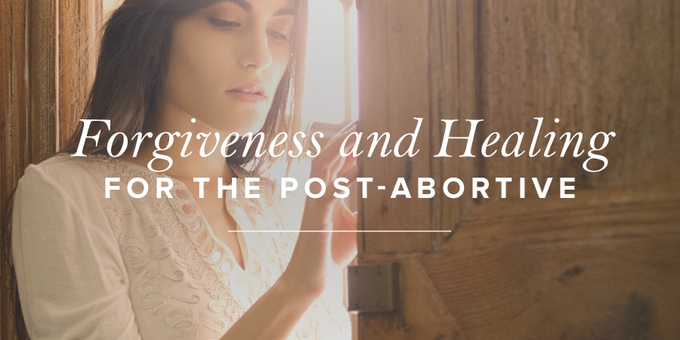 Forgiveness and Healing for the Post-Abortive

Mary May Larmoyeux | Abortion,  Forgiveness & Bitterness | Comments
Today, we have a special guest on the blog. Mary has a heart for the post-abortive among us. If that is you, she has a message—rooted in the gospel—of peace and freedom for you today. I’m praying this post will help you find true hope for your pain in Jesus.
—Hayley Mullins, True Woman Blog Manager

Melinda Chisum was sixteen years old when she discovered she was pregnant. Growing up in a very poor family, there often wasn’t enough food in her house. And for most of her childhood there was no running water. Daily rituals of fighting and screaming were commonplace. “I couldn't imagine bringing a child into that,” she says.

Choosing not to confide in her parents, she was scared and felt backed in a corner. When the nurse at the health department gave her the positive results of her pregnancy test, she also gave her a number for the abortion clinic. Melinda didn’t want to believe she was pregnant. That’s why she went to her family doctor for a second opinion.

The nurse there also provided the number to an abortion clinic. So she thought terminating the pregnancy must be her only real option. And like millions of women, she told herself, “It’s legal. It must be okay.”

A few days later she walked into an abortion clinic. She was alone. Afraid. Someone held her hand and said it would be over soon. But it wasn’t. Melinda says, “It was very painful. That night in my bed, the realization hit me that I had killed my baby. I cried all night and for many, many more to come.”

She told herself she had done nothing wrong, that abortion was her only choice, and it was her right to decide about her own body. And for the next twenty-two years, she says she “pushed it all under the rug.”

Melinda’s story is not unique. It may be yours or that of a young woman who sits next to you at church each Sunday. It’s a story of a troubling secret: a past abortion that has caused profound, unspoken pain.

If this is your story, Melinda and others want you to know everyone has past regrets and you can have a bright tomorrow. If this is the story of your friend, this post could help you understand her inner turmoil.

With so many women that have experienced abortion, why do so many suffer in silence? Could it be shame? The feeling that they are alone? That no one else could possibly understand?

My friend Laurie Kopf says, “I will never regret anything as much as my decision to go through with the abortion. Every detail of that day is forever engraved on my brain.” Her decision to have an abortion left her with a feeling of emptiness and deep shame.

As soon as the procedure was complete, she had regrets. “It left me feeling like I was a terrible, sinful offender who never deserved to be forgiven,” she says. “I felt if anyone knew, especially in the Christian community, they would think I was a horrible person.”

Author Sydna Massé writes that years ago, while enjoying a meal at a pregnancy center fundraising event, a woman near her remarked, “I don’t know how anyone who claims to know Christ could ever abort.” The woman did not know Sydna was a Christian when she aborted her child in college.

Turning to the stranger, Sydna gently replied, “One in three women in any setting could be post-abortive. Most abortion patients provide a religious affiliation on their intake forms. Only 38 percent report they have no faith background.” The woman looked at her in disbelief.

How can those in the Church that experienced abortion and its effects find healing? I asked several friends who once had an abortion where they found help.

Here is some of what they said.

How to Find Healing

My friend Renea was ashamed of her abortion and didn't want to read a book or article on the topic. Why? “Because,” she says, “I was sure people would know what I had done.”

So instead, she began to study the book of John in the Bible. She read in chapter 8 about a woman who had been caught in adultery. The scribes and Pharisees brought her before Jesus and said, “Now in the Law, Moses commanded us to stone such women. So what do you say?” (v. 5).

No one expected Jesus’ reply. He simply bent down and wrote something on the ground with His finger. Perhaps He jotted down some of the sins of the very scribes and Pharisees who were accusing the woman.

Next, He stood and said, “Let him who is without sin among you be the first to throw a stone at her” (v. 7). And then He bent down to write some more.

One by one, each of the scribes and Pharisees went away. Jesus said to the woman caught in adultery, perhaps with a compassionate gaze that pierced her soul, “Woman, where are they? Has no one condemned you?”

As Renea studied the book of John, she was encouraged by Jesus' unconditional love for people and His offer of forgiveness for any sin. “It made me hopeful that He might still love me.”

“It was a long process,” she said, “but I finally realized I was not only forgiven, but God wasn't holding my abortion against me.”

Laurie learned that same lesson. About ten years after her abortion, she believed God wanted her to disclose it in a small group Bible study. It was a scary thing to do because she feared she would be judged. But instead, she was met with encouragement and thanks.

Later a woman from the Bible study talked with Laurie privately. She said she had also had an abortion and asked how she could release her own abortion guilt. “In my grief and despair,” Laurie answered, “I realized I had to give those painful memories to God.”

Then she explained she had found inner peace and freedom when she took God at His word and chose to accept His forgiveness. “I realized what it came down to was, I can either accept God’s grace and forgiveness or I can reject it. I chose to accept it.”

2. Remember that turning to alcohol or drugs for relief is never the answer.

Many women long for relief from haunting memories or guilt from an abortion; it’s not uncommon for them to turn to alcohol or drugs. A study by the Elliot Institute found women who aborted their first pregnancy were 3.9 times more likely to have subsequent drug or alcohol abuse than women who never had an abortion.

In her book Her Choice to Heal, Sydna Massé says abortion is something most women are driven to out of desperation. She attended a Christian college when she became pregnant. And she thought having a child out of wedlock would mean the end of her future.

During an interview with FamilyLife Today, Sydna said, “I never thought . . . of going through an abortion as standing in front of me for the rest of my life, emotionally, spiritually, and psychologically.” Shaken and angry at her boyfriend after her abortion, she began a daily habit of getting high on marijuana or alcohol to drown out the memories.

Like the quick-fix of an abortion, she found substance abuse did not provide long-term relief. It only increased her problems.

If you are medicating yourself with drugs or alcohol, please get help. In addition to the spiritual consequences, there is much medical evidence of the devastating physical effects of addiction.

3. Allow God to remove your shame.

In her blog post, Shame on Me, Again, Vicky explains that guilt is connected to behavior, while shame is linked to identity. Guilt draws us toward God, but shame sends us far from Him. After having an abortion, Vicky struggled with both guilt and shame, and she thought she was a terrible person.

Today, as a follower of Jesus Christ, Vicky knows her identity is not in what she does or doesn’t do. Rather it is in who she is as a child of God. But like many women, there are times when she has to remind herself of a vital truth. Christ’s death on the cross completely covered her guilt and shame from her abortion, once and for all.

When the old shame tapes began to play, she says, “I hit the ‘eject’ button and boldly declared . . . ‘There is therefore now no condemnation for those who are in Christ Jesus’ (Rom. 8:1).”

“Over and over, I proclaimed it,” she says, “until, once again, I believed it. I showed shame the door. And you can, too.”

4. Allow yourself to grieve.

Terri Reisser, a licensed marriage and family therapist, has been counseling post-abortive women since 1984. And her husband, Paul, serves on the Physicians Resource Council of Focus on the Family. They say relief is the most common reaction immediately following an abortion. Why? Because the initial crisis of an unwanted pregnancy is gone.

However, as time goes by, the post-abortive woman is often left with an inward question. How could she allow herself to grieve the loss of her child when she herself made the decision to have the abortion?

If you are asking this question, grieving may be just what you need to walk across the bridge of healing. In their booklet Healing the Hurt, the Reissers give several ways you could do this:

Also, you may want to learn about The National Memorial for the Unborn. Located in Chattanooga, Tennessee, it is dedicated to remembering children lost from abortion and miscarriage.

The memorial has a fifty-foot granite “Wall of Names.” On it are thousands of small brass plates with the names of aborted children. These plates were placed there by their mothers, fathers, and other family members. For many loved ones, remembering a child in this way has helped them work through the grieving process.

Often women who are going through the grief of post-abortion cry for long periods of time. Sometimes they cry because of something that prompts an abortion memory. Sydna Massé explains, “A song on the radio reminds you of the abortion period in your life. Seeing the father of your aborted child, meeting a child about the same age your child would have been.”

The main thing about grief is you will never completely get over your loss. However with God’s help, you can get through it. And remember, everyone grieves in their own way. “Sometimes,” Sydna says, “talking with a close friend, minister, or counselor and sharing your feelings about your lost child is comforting.”

Surprisingly, another post-abortive woman could be your worst enemy during your mourning process. If she is still in the denial phase of her abortion, Sydna says, “she could easily discredit your feelings in order to fortify her own wall.”

She also says that while our society often encourages people in pain to “get over it,” God did not make us that way. Ecclesiastes 3:1 says, “For everything there is a season,” and verse 4 says, “a time to weep, and a time to laugh; a time to mourn, and a time to dance.”

And someday, Lord willing, Jesus will help us all laugh and dance again. Tomorrow on the blog, Mary will guide us through some more practical ways to heal from the pain of abortion. If this is something you’re walking through, we hope you’ll join us. And if this is the story of someone you love, Mary will also share ways we can surround and help those in the healing process.

Help and Hope for the Post-Abortive