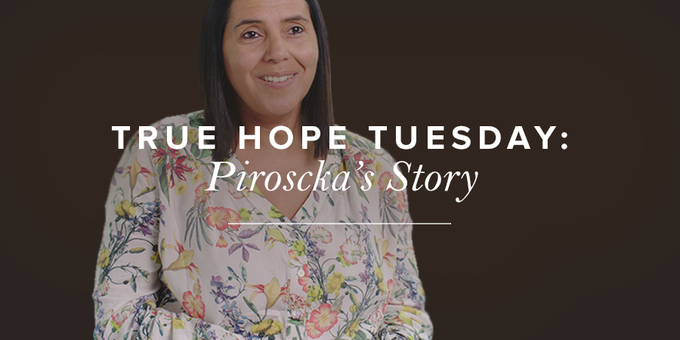 Mindy Kroesche | Abortion | Comments
It’s that time again . . . True Hope Tuesday, where we share a story of one woman who has found freedom, fullness, and fruitfulness in Christ. Today’s story is of a woman who found freedom from her secret of abortion. I hope you’ll be encouraged that no matter what secret you’re carrying, Jesus is enough to bring you freedom and True Hope. —Hayley Mullins, True Woman Blog Manager

As a young woman in the Dominican Republic, Piroscka longed for the perfect life. Though she had been involved in religious activities, she didn’t know Jesus as her Savior. Piroscka put her hope in her boyfriend and their future together.

When she was twenty-one, Piroscka got pregnant. Ashamed and embarrassed, the only person she thought she could turn to was her boyfriend. But when she told him about the pregnancy, he offered no support.

Piroscka felt alone . . . and desperate. She wanted the baby, but she wanted her boyfriend more, so Piroscka agreed to an abortion.

Then she got pregnant again. This time, she didn’t hesitate. She knew what she had to do in order to get the life she wanted.

“Nothing was going to take away the plan I had—that I was going to continue this perfect relationship and eventually have a perfect wedding.”

That wedding happened just one year later. Eventually, she and her husband had four children. And though she strived for an ideal family, it soon became evident she wasn’t the one in control.

Piroscka’s oldest son was born with a brain tumor that caused many health issues. Through the struggle of caring for his needs, her family began to attend church, where they consistently heard the Word of God.

One Sunday morning, Piroscka was hit with the reality of the gospel. She finally understood she was a sinner and Christ had paid for her sins at the cross. At the age of thirty-seven, Piroscka surrendered to her life to Christ. Not long after, her husband became a Christian, too.

As Piroscka became more involved at church, she met Laura González de Chávez, director of Aviva Nuestros Corazones, the Spanish ministry of Revive Our Hearts. Piroscka volunteered to translate the English programs into Spanish, which had a dramatic impact on her new faith in Christ.

“Every message I heard from Nancy was a message just for me,” she said. “God used Nancy to align me correctly in the way He wanted me to be as a woman of Christ.”

In 2015, Piroscka attended the Mujer Verdadera Conference. When Dannah Gresh, one of the speakers, talked about revealing secrets that keep you in bondage, Piroscka’s heart beat faster. She had never told anyone about her abortions. And while she knew she was forgiven, she couldn’t shake the shame. “The enemy made me feel dirty and not worthy,” she remembers.

That day, Piroscka confessed her secret to a trusted friend. That step, plus a Bible study she later completed at a local crisis pregnancy center, allowed her to be set free from the bondage of guilt and grief.

Today, Piroscka has found her purpose in life: to counsel other post-abortive women and share with them the Truth and freedom available through Jesus.

Once upon a time, Piroscka found hope in having a perfect life. Now Revive Our Hearts has helped her to find True Hope—through the Word of God and Jesus Christ who has set her free.

Conferences like the one Piroscka attended (and blog posts like this one) are only made possible through financial gifts. As we come to the end of the year, you too can be a part of what God will do to bring True Hope to women’s lives in 2019. To partner with Revive Our Hearts—and the True Woman blog—visit our donate page. Any gift you give through December will be matched by generous partners, doubling the impact of your giving! We’re grateful for you, our reader, and the ways you invest in this mission.

Forgiveness and Healing for the Post-Abortive