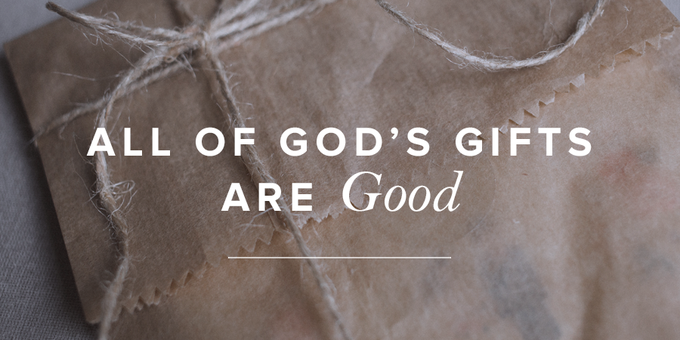 All of God’s Gifts Are Good

Alice is a four-year-old girl who, unless the Lord intervenes, will die before next Christmas. I want to write it softly and tenderly, like the old hymn, choosing gentle words. Perhaps . . .

Truths like these whisper sweetly, a gift I long to wrap in pretty tissue paper and place in the hands of her grieving family. Perhaps next Christmas they will be ready to receive these delicate word-gifts—to set them carefully under the tree in anticipation of future joy.

But this Christmas, they’ve been given cold, hard words:

Alice is a four-year-old girl who, unless the Lord intervenes, will die before next Christmas.

For a month now, I’ve avoided writing this story. Though her family is related by both physical blood and the precious blood of Christ, I worry that this story may not be mine to tell. But today my fingers stumble over the keys because it’s one I long to share with you, dear reader, in case you have a life-altering gift waiting to be unwrapped this Christmas, or next, or the year after that.

Perhaps you were expecting something delightful this year . . . but the paper-concealed gift under the tree is unsettlingly heavy, has a raw, earthy scent, and lands in your home with a thud.

Yesterday you were sure God would give you bread this Christmas; today you fear your package holds a stone . . .

I’ll be brief with the nuts and bolts of Cousin Alice’s diagnosis, since wrapping a lump of coal in fancy paper and bows doesn’t make it any less a lump of coal.

Near the end of September, just a few days before her fourth birthday, Alice’s dad and mom (accompanied by newborn baby sister, Violet) brought her to see the doctor. They had noticed, among a few other symptoms, that she was a bit wobbly when she walked and that one of her eyes was not quite tracking properly. Doctor One sent them to Doctor Two, who said this was most certainly not diagnosis A, and sent them back to Doctor One for next steps.

The next steps, of course, were Doctors Three through probably Eleven, and tests One through Ten. (Or something like that. You get the idea.) A day and a half and a brain surgery later, they were sent home with diagnosis B—a DIPG brain tumor, a grim prognosis, and a sick little girl.

After a few days of grace, Alice’s parents and the doctors came up with a plan: five weeks of radiation, five days a week. With it, Alice could have six to nine months of life with her mom and dad and five siblings. Without it, two to three months.

Alice is a four-year-old girl who, unless the Lord intervenes, will die before next Christmas.

There are no man-inspired words with which we can offer any comfort to a family who will likely give holiday gifts to their precious daughter for the last time. To contemplate what to say to them this Christmas is a no-good-decision scenario, like the one in which the little girl’s grandmother found herself on the eve of Alice’s birthday.

As we stood in their driveway, tears tumbled down her cheeks.

I spoke the only words I could think of at the moment: “All of the gifts we give will eventually be left behind, won’t they? We just don’t know when.”

But because we fallen beings love, we give faulty, fallen gifts—temporal, short-lived, benign . . . Tainted with sin and destined for the landfill, we give them anyway because, well, they’re the best we can do on this side of heaven.

As so many turning points in Scripture begin: “But God” . . . His ways our not our ways. His thoughts are not our thoughts. And you know what else? His gifts are not our gifts. They are far infinitely superior to anything we could conjure up in the craft room or the Joanna Gaines aisle at Target.

We believe—we know the truth of James 1:17, that “every good gift and every perfect gift is from above, coming down from the Father of lights, with whom there is no variation or shadow due to change.”

Job asked, “Does God pervert justice? Or does the Almighty pervert the right?” (Job 8:3).

The psalmist declared, “As your name, O God, so your praise reaches to the ends of the earth. Your right hand is filled with righteousness” (Ps. 48:10).

We who know and love the family of this sweet little girl have no other hope but that of James, Job, and the psalmist—that our Sovereign God knows what is good and what is right and operates as such every single moment of every single day.

After what was undoubtedly the most difficult week of his life, Alice’s dad Joe, a pastor, did what expository preachers do. He preached the next passage. Though it had been ascribed to him by the preaching schedule of the Senior Pastor, who graciously offered to let him choose any text he wished that week, Joe stayed the course. The text was Matthew 7:7–11.

His message title? “All God’s Gifts Are Good.”

“Ask, and it will be given to you;” Jesus said, “seek, and you will find; knock, and it will be opened to you. For everyone who asks receives, and the one who seeks finds, and to the one who knocks it will be opened. Or which one of you, if his son asks him for bread, will give him a stone? Or if he asks for a fish, will give him a serpent? If you then, who are evil, know how to give good gifts to your children, how much more will your Father who is in heaven give good things to those who ask him!” (Matt. 7:7–11).

Pastor Joe laid out how Satan said to Christ, “Your Father gave you rocks.” He worked through Christ’s response, “Man cannot live by bread alone.” He asked application questions: What is God’s role in this? Surprise? Remorse? Did God simply allow this trial to come into their lives, or did He absolutely ordain it? Is this the work of Satan? Will Alice die or be healed based on our faith?

And this one: Does God have control over this at all, or do we serve a God who is weak? Here is his answer, as pastor, father, and brother in Christ:

If God can’t protect little girls, if He can’t, we should fear Satan far more than we fear God, and that’s a place where we’d never want to be.

Either all of God’s gifts are good or none of them are, friends. All.

I share this story with you this Christmas, reader, not so that you feel sorry for Alice, though you may, nor that you would weep with her family, though you might. Neither do I tell you her story so you fear that next Christmas you too will find a hard, unwanted gift hidden beneath your Christmas tree.

I share this with you that you might believe, that you might know that all of God’s gifts are good. I desperately want you to hear this truth, not from me, the writer with the cursor dancing before me in my warm office, but straight from the lips of a father who would give any possession, take any infirmity or calamity, offer his own life one hundred times over to save his daughter’s life right now. And yet he tells us, the Word tells us, Jesus tells us . . . all God’s gifts are good.

Dear one, I don’t know what this Christmas or next will hold for you. But when the next tragedy or trial or tempest comes (and it will), when Satan says, “Your Father gave you rocks,” don’t you believe it. Don’t you dare. Remember that Jesus said, “Man cannot live by bread alone.” And remember the testimony of a broken pastor-father, weak in heart but strong in faith:

Our hope rests in a Father who never gives out stones and snakes . . . He never gave us any stones.  –Joe Reed

When God’s Love Is Confusing