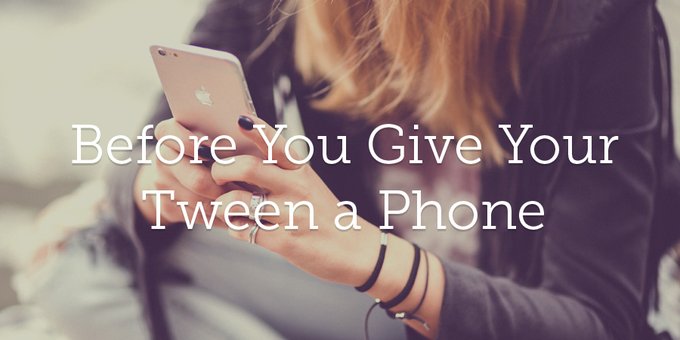 Before You Give Your Tween a Phone

When my daughter was twelve, she told me I was cutting off her social oxygen by not giving her a phone. Everyone else had one, she said.

It was the first time she really wanted something that we decided not to give her. (Read/listen to the interview I did with her at the time here.)

I remember having secret doubts about our decision, especially since other godly parents were giving their kids phones. I couldn't gather advice from moms of older kids, since even ten years prior no tweens had phones. Now, apparently every kid had one—except my daughter.

Phones have become the right of passage. And if your child is edging toward middle school, you, too, will have to decide what, when, and how you will respond to the phone question. Most importantly, you'll need to decide why.

Last month, my daughter, who is now seventeen, had some girlfriends over for a "Yay-we're-the-new-seniors!" celebration. On a whim, I asked the girls if I could interview them on the topic of giving cell phones to middle school girls. So these six seniors (I'll call them the "Senioritas") gathered around my kitchen table to talk about the phenomenon of the middle school girl with a cell phone in her hand.

It was quite enlightening. First, because these girls have a vantage point that I don't have. For five years they have been submersed in a teen phone culture. But also, they see things differently than they did in middle school. In their older-and-wiser state, they had plenty of advice to share with me—and perhaps, you.

All six Senioritas attend a public, suburban high school in a conservative community. Most, if not all, are Christians who come from supportive, caring homes. These are responsible girls—the kind you'd want to babysit your kids. They get good grades and choose friends wisely. If one of these Senioritas was your daughter, I'll bet you'd be proud of her.

Most of the Senioritas got a phone at age twelve in sixth grade. Others got phones as rewards or on birthdays. Currently, they all have smartphones. As we chatted, the Senioritas were adamant about the following causes for concern.

Parents, here are three things you need to know about kids with cell phones (according to some seventeen-year-olds):

It's all changed since the Senioritas were texting on their "slide phones" in sixth grade. Now, with Internet access and apps like Kik (known for causing innocent kids to stumble into sexting), there are new dangers with every swipe, glance, and buzz.

Everyone else might be deleting what was just shared, but nothing gets deleted from a hurting kid's heart.

The Senioritas especially advised caution with social media (such as Facebook, Instagram, Twitter, and Snapchat). Breezy, carefree kids entering middle school seem to suddenly be transformed into awkward, self-aware kids, who obsess over fitting in.

A twelve-year-old girl might have been completely oblivious to how she ranked socially just six months ago. But now it's how she measures her self-worth. And what does she use as a measuring stick? Social media. It provides real, palpable data on how she's fitting in. If she is included in a group text, this is concrete evidence that she is part of that group. If she gets positive responses to a picture she posts, this is tangible proof that she is admired and valued.

Because of this, the Senioritas had some startling advice. They unanimously agreed that kids should not be given social media before high school. (Their words, not mine! Listen here.) When I pressed them on this, they backpedaled a bit—probably realizing how drastic it sounds. They suggested that maybe some middle schoolers could be given a carefully monitored Facebook page or Instagram account.

"But which kids?" I asked. "How would I, as a mom, know if my tween or teen is ready for that?" One Seniorita responded, "Some kids will go to any length to be considered popular, and those are the kids I'd worry about."

What's there to worry about? Bullying, for one. "The screen removes emotion," explained one Seniorita. Girls post or tweet things they would never say to someone's face. Social media provides a host of ways to gossip, too. "You can just screen shot something someone tweeted," said another Seniorita. "It's easy to not feel guilty, because you're just passing [information] along." (Listen here.)

But when the information being passed on is about you, it can be incredibly hurtful. Everyone else might be deleting what was just shared, but nothing gets deleted from a hurting kid's heart.

My conclusion: All of this adds up to a lot of pressure and temptation on some very young kids. Moms, be protective. Don't put your kids in situations they aren't ready to handle yet—even if they tell you they are.

There is one whose rash words are like sword thrusts, but the tongue of the wise brings healing (Prov. 12:18).

Nowadays, middle school dating relationships are largely funneled through phones. Boys, who struggle more with communication, find it easier to send a text or flirt from behind a screen. And girls, who long for security, use their phones to constantly gage the relationship. It's not enough to be "Facebook official"; today's middle school girl expects a steady stream of social media assurance that the relationship is still on.

For the middle school girl who looks to boys, not Jesus, for her sense of security, the phone in her hand offers an incredible amount of temptation.

"He didn't text back right away," she'll say. "I think that means something . . ." Or she'll obsess over the fact that he ended the text with only one exclamation point. Or agonize over what he meant by not adding a smiley face.

Are we saying a girl's relationship security can hinge on a punctuation mark? You betcha.

The Senioritas, who haven't dated much themselves, think teens jump too quickly into relationships. One Seniorita quipped sarcastically, "People comment that they love each other under an Instagram picture of themselves, and I think, You've been dating for what—two weeks? And now you love each other?"

Probably not. More likely, they love the idea of being loved and wanted and chosen. But this craving can only be satisfied by Jesus.

For the middle school girl who looks to boys, not Jesus, for her sense of security, the phone in her hand offers an incredible amount of temptation. Intuitively, she knows that sending pictures of her body and provocative messages will generate a response from boys. But that response is not love.

My conclusion: Mom of a boy-crazy girl, beware of the temptations that your girl will face with a phone in her hand. Why not protect her by waiting a bit longer? Help her find her security in Jesus, not a boy.

But among you there must not be even a hint of sexual immorality, or of any kind of impurity, or of greed, because these are improper for God's holy people (Eph. 5:3).

3. A phone can replace God and true friendships.

The Senioritas unanimously agree that it is incredibly easy for a middle school girl to begin putting her hope in what her phone tells her rather than what God tells her. Having a phone can be really distracting! It constantly pulls your attention to a screen rather than to God and His Word.

Real friendships happen with real people in real time—not on a screen.

Ironically, a phone can also pull you away from your friends. One Seniorita said it drives her crazy when a friend is constantly using her phone while they're together. She thinks, We're talking right now. Why do you need to talk to someone else?

Middle school girls can be especially addicted to Twitter and Instagram. Why is this? The Senioritas brought up identity. Social media allows a girl to recreate her identity. "What you post is who you are," said one Seniorita. Another said, "You get to decide what you project online. You want to post things that make you look the way you want other people to see you."

But is this projected image really you? Friendships that result from a girl's selfish efforts to acquire acceptance and belonging are not genuine. They're superficial and flimsy. The Senioritas agree: Real friendships happen with real people in real time—not on a screen.

My conclusion: Mom, help your girl develop genuine friendships—both with God and people. If you decide to let her use social media, help her see it as a way to reach out and encourage her friends and acquaintances, not as a way to boost her self-esteem.

Love one another with brotherly affection. Outdo one another in showing honor (Rom. 12:10).

So parents, what do you think? Is your tween ready for a phone? Why or why not?

3 Trojan Horses That Are Threatening Our Ability to Connect

Do You Own Technology or Does It Own You?