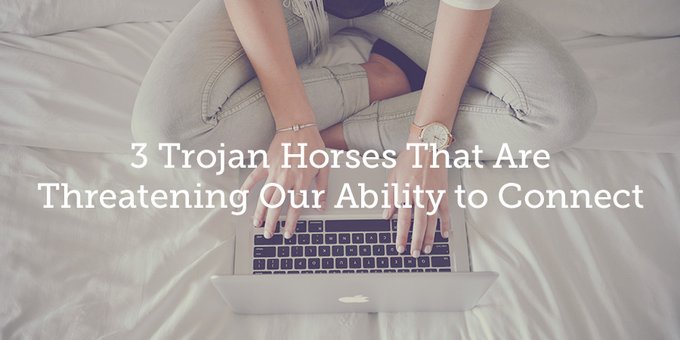 3 Trojan Horses That Are Threatening Our Ability to Connect

After a fruitless ten-year war against the city of Troy, the Greeks come up with a strategy to secure their place in the pages of history. They construct a massive horse designed to hide an elite force of their best fighters. The rest of the Greek army sails off into the sunset, leaving their enemies to believe that they have given up the fight. Relieved that the conflict is finally over and assuming that the giant horse is an offering to the god Athena, the Trojans wheel the beast into the fortified walls of their city.

Night falls, and the Greek special forces climb out of their hiding place and unlock the gates for their fellow soldiers who have returned under the cloak of darkness. Troy is destroyed. The war ends. The Greeks win.

No, this blog hasn't taken a hard right turn into the subject of ancient mythology. This is a post about loneliness. To tackle that big subject, we need to revisit the Trojan horse, because too many of us have pulled our own version of that horse into the gates of our lives.

For our purposes, a Trojan horse is simply this: Something we invite into our lives thinking it's a gift, but in time it turns and attacks the things we most treasure. Here are three Trojan horses that are attacking the depth and quality of our relationships, leaving many of us disconnected in a connected world.

If we are going to get real about the ways loneliness rears its ugly head in our modern lives, we must take a hard look at technology. Don't worry. There will be no witch hunts for your iStuff. I won't propose a ceremonial burning of everything with an on/off switch or suggest that if we all moved to a TV-free hippie commune, then loneliness would cease to exist in our lives.

Researchers theorize that we are spending so much time online that we no longer have time to go out with our non-Facebook friends.

The reality is that technology is both a cause of loneliness and a false cure. It's impacting our relationships, and the impact overall isn't good. But technology is here to stay. Over-romanticizing life without a screen won't scratch our itch to be known. The answer is to rethink the difference between authentic human connection and connection to the virtual world.

Honestly, when I'm not writing a blog post about technology's role in our relationships, I largely consider the media consumption habits of others to be none of my business, but I have marveled at the consistency with which others feel the need to defend themselves in this area. The fact that we are all so testy about our media usage should throw up a red flag or two. The truth is, we're all addicted, and our denial about this fact isn't doing us much good.

Here are the hard facts:

What is the result of being constantly plugged in? More than half of us admit we find it difficult to make friends in "real life" compared with online. "Skin-hunger" is a real condition that is growing like wildfire. Think of skin-hunger as the adult version of failure to thrive. For the first time in history, deep, devastating loneliness is making young people as lonely as the elderly, the group typically seen as the loneliest among us. Despite the fact that most young people have an average of 243 Facebook friends, it's not translating into real-life friendships. Researchers theorize that we are spending so much time online that we no longer have time to go out with our non-Facebook friends.

It's time that we all get real about the opportunity cost of so much clicking. What aren't we doing by spending time on Facebook, Words with Friends, Internet news, Twitter, email, and watching television?

Society as a whole has chosen its side of the fence. The masses will continue to worship technology and work toward faster and faster pings. If you want to be truly connected with others, you will have to break away from the pack.

If we were to build an altar to our worship of convenience, I think it might be sponsored by Google.

Close your eyes for a moment and try to imagine life without Google. What would you do if you needed to know how to make a pie crust? You would have to call your momma. What if some new friends from church invited you over for dinner? How would you know how to get there? You would pick up a phone and ask. What if you wanted to learn how to garden, or how to build a treehouse, or how to paint with watercolors? You would have to take a class, ask an expert, or at the very least enter a bookstore (remember those?). You would be unable to learn how to do things by watching a YouTube video or reading an answer from Ask.com. Human contact would be required to solve basic, everyday problems.

Valuing people means adopting an overt willingness to be inconvenienced.

Instead, as a society we have removed the need for connection. Our iPhones know everything, so there's no need to ask questions of others. But what if convenience isn't as great as we all think it is? Is it possible that inconvenience is the real sweet spot?

As I read the Gospels, one fact is undeniable to me—Jesus valued people. Over and over He allowed Himself to be stopped, inconvenienced, and used by the people around Him. There is a lesson to be learned here. Valuing people means adopting an overt willingness to be inconvenienced. It means doing things that cannot be measured. It means developing relationships based on who people really are and not who we want them to be.

This idol may not look like a giant horse. It's more likely to resemble your job or your church or your kids' sports schedule. But I am convinced that in the war for true connectedness, the Trojan horse sitting outside our gates that poses the biggest threat is busyness.

Here's a look at just how big this idol has become.

Yep, we are a busy bunch, and our breakneck pace is hitting us where it hurts. One study found that 60% of Christians around the world feel that their hectic schedule prevents them from spending more time with God. That trend is also reflected in our relationships with others. The simple truth is this: the roots of our relationships cannot grow deep when we don't have time for true, meaningful connection off the clock.

Sending the Trojan Horse Back

Allow me to rewrite history for a moment. After a ten-year war, the Greeks retreat with no warning and leave in their place a giant wooden horse. The Trojans have a moment of clarity. They realize this doesn't make sense. The jig is up. The small team is easily defeated once exposed. Troy wins.

You can rewrite your own story too, you know? You don't have to keep pace with the rest of the world. As a Christian, God deserves the firstfruits of your time and energy, not another excuse about why there is no time left to know and be known. As a parent, your children deserve to have the best of you, not the scraps left over by a bulging schedule. As someone with only one life to live, you deserve to know that rich relationships are possible. The world will keep on spinning. Our iStuff will keep on beeping. The offers to go and do and be will keep coming, but a peaceful life full of deep relationships is possible, and it's worth fighting for.

Note: Much of this post was taken from my latest book, Connected: Curing the Pandemic of Everyone Feeling Alone Together.

Previous Post A Secret Women's Retreat in Northern Thailand
Next Post Antelope Hunting: How Loneliness Makes Us Vulnerable to Sin

Before You Give Your Tween a Phone

Please Stop the World--I Want to Get Off