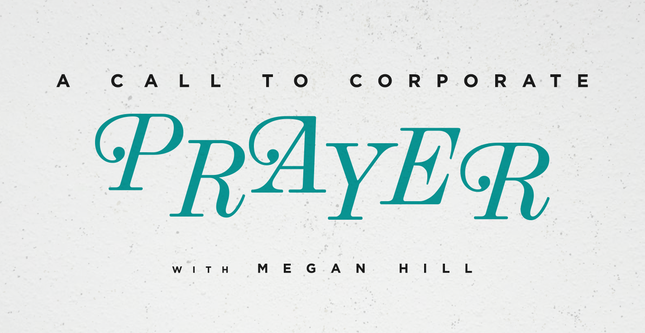 A Call to Corporate Prayer

Season:  A Call to Corporate Prayer, with Megan Hill

Resources Related to this Episode

Leslie Basham: Does God pay more attention to big groups of people than to an individual? Here's Megan Hill.

Megan Hill: The Bible assures us again and again that the Lord hears the prayer of one person, that even one person who is covered in the blood of Jesus and has the Spirit is heard by God and that the Spirit helps us when we pray and that Jesus is making intercession for us. So if you are one person by yourself on a desert island, the Lord hears you, and that's precious to Him.

Leslie: This is Revive Our Hearts with Nancy DeMoss Wolgemuth for Friday, July 29, 2016.

Nancy DeMoss Wolgemuth: Well, I am so encouraged about the way that God is stirring the hearts of people everywhere to cry out to Him in prayer. There are several large prayer gatherings that have been planned to ask the …

Leslie Basham: Does God pay more attention to big groups of people than to an individual? Here's Megan Hill.

Megan Hill: The Bible assures us again and again that the Lord hears the prayer of one person, that even one person who is covered in the blood of Jesus and has the Spirit is heard by God and that the Spirit helps us when we pray and that Jesus is making intercession for us. So if you are one person by yourself on a desert island, the Lord hears you, and that's precious to Him.

Leslie: This is Revive Our Hearts with Nancy DeMoss Wolgemuth for Friday, July 29, 2016.

Nancy DeMoss Wolgemuth: Well, I am so encouraged about the way that God is stirring the hearts of people everywhere to cry out to Him in prayer. There are several large prayer gatherings that have been planned to ask the Lord to draw His people in revival and to reverse the tide of evil in our nation.

That includes the event that Revive Our Hearts is hosting specifically for women called Cry Out! I've been asking the Lord to call together at least 100,000 women to join in groups over a nationwide simulcast. We'll be crying out to Him to meet the desperate needs we're facing during this desperate time.

I'm also encouraged that as we lead up to Cry Out! Megan Hill has written a new book called Praying Together: The Priority and Privilege of Prayer in our Homes, Communities and Churches. I love that title!

Megan Hill, the author, is a pastor's wife and a writer. Just a few weeks ago she spoke with Erin Davis, who's a regular contributor to Revive Our Hearts. They connected at the Gospel Coalition Women's Conference, and that's why you'll hear some conference noise going on in the background.

Let's listen as Erin and Megan talk about why it's important for women to pray together and how they can be effective in crying out to the Lord together.

Erin Davis: So, prayer, it's a topic of much conversation in the church, and I'm interested in why you decided to write an entire book on praying, specifically, corporate prayer, praying together.

Megan: I think it's something that the Lord has really used in my life. It's been a very important part of not only my adult life but also my childhood. I've always been in churches where prayer was very important. And I've just seen the blessing of praying with other people.

And then for about the past ten years, there's been a woman, an older woman, in my church who invited me to pray with her, and we prayed once a week for ten years. It was just a sweet time of discipleship, really, even though all we were doing was praying. I feel like I learned so much about the Christian life and about faith and about who God was just by praying with her. And I thought, I think other people could really benefit from this.

I think it's something that, in the church, we acknowledge is important, but maybe sometimes there's some awkwardness or some reluctance, and I just wanted to give people a sense of, "This is really a great thing; this is wonderful. It's worth prioritizing."

Erin: Describe that weekly prayer meeting. Was it just you and her, the two of you praying?

Erin: And did you work, did you identify prayer needs first, or anything? That's an easy place to start, for a woman who's listening to this, and she may not want to launch a full-fledge prayer effort at her church, but she could pray with one other woman.

So could you just give her some practical on-ramps to praying with another woman?

Megan: Sure. I think probably the first thing is we never set out to pray for ten years. We did not commit to ten years. We only committed to one Tuesday morning, and that turned into another Tuesday morning. So I don't want anybody to think, Oh, man, that's some 500 times I'm going to pray with this person.

I think we did identify some prayer needs in the beginning. We did pray, of course, for ourselves, our families, and our kids. But we also prayed a lot for the work of missions. We prayed for different nations in the world that may be in the news. We prayed for the Christians in those nations. She was in my church, so we had some common people in our church that were suffering or in difficulties.

Sometimes other women came. It was just depending on different points of those ten years. There would be women who would be free on Tuesday morning. We'd invite them to come. It was never more than four people. So that was good, too. It was definitely open to other people coming, and we were always blessed when they did.

Erin: Sure. I don't know if it's the nature of prayer, but it's a little bit of a strange thing to invite people like, "Come to this prayer meeting. We have no program, nobody's speaking, but we're just going to pray."

In my own church, I've gone to this church for quite some time, and I just found out there's a group of people that meet every week to pray for our nation. They've done that faithfully for years and years and years, but, for whatever reason, they never told anybody else they were doing that. So I wonder if you could just write us a permission slip that if you're already praying with other women, you already have a regular prayer commitment, how we can invite other women into that circle.

Megan: I think it works best if it's just sort of natural. "Hey, I'm praying on Tuesday. Do you want to come?" Or, "I know you're looking to get plugged into this church, you're new, a great way to meet other women is to come to this thing, and all we do is pray."

I almost think the lack of program can be inviting. "We just get together and pray" is sometimes easier than, "You're going to be expected to read a chapter and have to answer some questions." So I think, naturally, we can invite people that way.

Erin: What were some of the specific benefits you saw in your life during that ten-year season of praying together?

Megan: I think I just learned a lot about faith. I think sometimes what happens when we pray by ourselves, which we should certainly do and make a priority of, but sometimes you're there praying, and you're thinking, Is there anyone listening? Is this going any higher than the ceiling really? We can be overcome by our own doubts by ourselves.

I think when you pray with somebody else, it's like their prayers remind you that this is important work. The Father is listening. And on those days when you're kind of pushing prayer off to the side, you're not really motivated to do it, when you think, I have to show up on Tuesday morning, and I have to pray. It's a helpful discipline.

I think we learn things about God from being with other women, other godly women, because they have an experience of God and a relationship with God that . . . God is always the same, but their experiences may be slightly different, and hearing them praying, we see different aspects of that relationship. We're, like, "Oh, I'm like that, too." And, "Oh, I hadn't thought about God in that way before."

I think we learn things about repentance for sin. When I hear Carol confess her selfishness, I think, Oh, you're right. I'm selfish, too. I should confess that. I hadn't thought about that in that way.

Erin: Sure. You mentioned the awkward factor.

Erin: There is a little bit of an awkward factor in praying with other people.

I have friends who love the Lord so much, and I know are faithful in prayer, but I think, like in my women's Bible study scenario, if I were to say, "Jenny, would you lead us in prayer?" Or, "Tracy, would you lead us in prayer?" there would be a clamming up and maybe even a refusal to do that. Can you speak to what it is that is either intimidating or awkward about praying with other people?

Megan: In social science sometimes, they'll do a study. There was one that was done a few years ago of what people's greatest fear is. When public speaking is in the list, people would rather fall off a cliff or die or something than do public speaking. So I think that praying out loud is maybe the Christian equivalent of public speaking. People hate it sort of in the same way that they would hate having to get up and give a speech.

Erin: Sure. I never thought of that.

Browse Past Episodes By