Randy’s eyes sparkled with anticipation. The man had assured him that if they wanted to go, funds were available. But when he proposed the mission trip to his wife, Tricia shot it down with an emphatic “no.”

As Randy sat dejectedly listening to Nancy on the radio sharing about an upcoming True Woman Conference, he was convicted. Instead of being mad at Tricia, he thought, “Why don't I help her grow in her faith?” He arranged for childcare and a close friend to attend True Woman with Tricia, still having no idea it would make such a difference in their lives.

At that conference, Tricia’s spirit was freed. The change was immediately noticeable to Randy. In the first fifteen years of their marriage, they didn’t have many deep discussions about their sin or salvation. But now Tricia was freely telling him that what she had brushed off as “that’s just my personality” was really sin she had excused for years. It brought a new closeness to their relationship.

Tricia had also struggled with reading comprehension since childhood, so she didn’t desire to dig into Scripture. She didn’t feel comfortable attending Bible studies for fear of someone asking her a question she couldn’t understand the answer to. After the conference, however, her devotional life grew richer.

She also started listening to Revive Our Hearts as she cleaned their church. God continued to work in her heart, and her faith grew stronger.

Two years passed before Randy and Tricia had another opportunity to travel to Africa. Tricia was still terrified, but she felt the nudge to go.

In God’s providence, the 2012 True Woman Conference fell one week before they left. God used that time to assure Tricia He was with her. She would need that.

Her first night in Africa, Tricia huddled in bed petrified of the smells, the sounds, the creatures scurrying around the room. She gathered her son in her arms and prayed, “Lord, we’re scared. Fill our hearts with peace.” Every day was filled with new challenges. But because Tricia couldn’t control anything, her dependence and trust in Christ became more and more real. 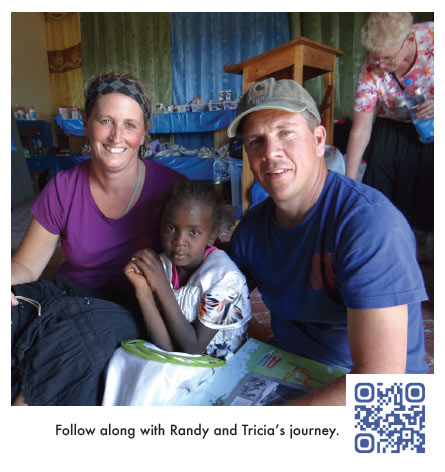 Their Most Harrowing Journey Yet

Since that time, Randy and Tricia have visited Africa four times. Tricia has even co-led a few Bible studies. But in 2021, God called them on their most harrowing journey yet: Randy was diagnosed with stage four stomach cancer.

Because she served as Randy’s caregiver, Tricia was unable to attend Revive ’21 in person, but she registered for the online experience. After a year of riding through the worst storm of her life, Tricia longed to be “grounded” in Christ. Once again, God’s timing was perfect. She could see how He had used each trip to Africa and every ROH conference to prepare them for this journey.

As Tricia scooted closer to Randy, he looked at his wife and marveled at her tender heart and strength. What a blessed man he was to have her by his side on this journey. In this past year, they had exchanged some of the hardest discussions about life and death, sin, shame, forgiveness and redemption, the character and sovereignty of God. It seemed as though God had been preparing them all along for this moment in time.