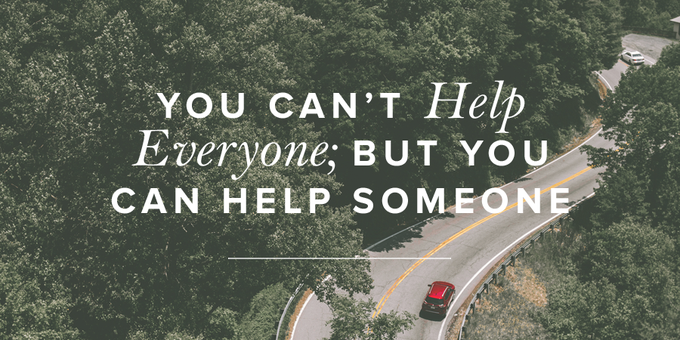 Her almond-shaped, chocolate eyes still haunt me. "Where is she right now?" is a question that runs through my heart as my mind rummages through a long-running debate over where my responsibility to the helpless begins and ends.

My husband and I were heading to pick up one of our little ones with plans to play at the river, and the morning was open to possibilities and fun. He was driving, and both of us saw her at the same time. There in our lane, on a major highway with cars running sixty-plus miles-per-hour, a little one was toddling along completely unaware of the danger.

Toddling down the middle of a major highway, surrounded by passing vehicles.

No tears, only smiles and those chocolate eyes.

The car directly in front of us could easily have missed seeing her and mowed her down. They put on the brakes at the same time we did, and three car doors swung open in unison. One momma reached her just before I did, picking up the sweet girl and stepping out of the highway, and there we all stood, we three mother—strangers staring at this little one with wide-eyed terror. We knew how close she came to having her life extinguished—but Little Chocolate Eyes was completely unaware.

My husband and the other driver pulled their cars off the road and into the closest yard. Another vehicle pulled in behind us. A school counselor, she had seen the toddler, too, interrupted her trek to work to stop and be a part of this rescue operation. Wearing her official badge, her face was full of concern but also full of the familiarity of seeing the unprotected exposed to danger.

The toddler's little face never showed concern. Those large chocolate drops scanned us one by one, as we spoke calmly to her, expecting a meltdown. But she didn't seem alarmed by the fact that strangers had snatched her up and whisked her out of busy traffic.

I had an eerie feeling this wasn't her first time to be rescued by unfamiliar faces.

We were standing in an overgrown yard, but had no idea if this was the house where she belonged. Her only reply to our questions was "Dog . . ." pointing to the large dog inside the fence beside the house. She was just a little thing, fat stubby legs, diaper-covered bottom, a small T-shirt hanging loosely, and those chocolate eyes.

LeRoy crossed the yard to the house and knocked on the door several times, but no response. A deputy from the County Sheriff's Department pulled into the drive where we were standing and asked a few questions before heading to neighboring houses to begin a search. Little Chocolate Eyes wasn't saying a word, wasn't shedding a tear. She seemed to be familiar with the chaos and trauma. Two more police cruisers pulled in.

And finally the door to the house slowly opened wide and the actual momma quietly stepped out into the bright morning.

Not the First Time

The young momma rubbed her eyes, eyes with those same chocolate drops. In a strange way, she didn't appear surprised, distressed, or affected at all by the fact that strangers were standing in front of the house with her little one in the arms of another momma, while gun-toting civil authorities searched for answers with notebooks and questions spoken into shoulder-strapped radios. We all just stopped to stare at her as she lazily gazed back at us.

Answers came tumbling out of the sleepy mom's mouth without any sign of remorse or concern.

Her little one was just rescued from what could've been tragedy—but neither this mom's face nor her voice relayed any emotion.

Yes, this had happened before, the mom was telling us. Just a week ago, staying in a different place, Little Chocolate Eyes wandered down a major thoroughfare across town until she found safety (and something to eat) in a doughnut shop. On that first escape, the mom was reprimanded and everyone understood that little ones can get out of sight before you know it, and that was that.

Now, a week after that incident, they were spending the night at this house. "No, it's not our home" she told the officer, "just an overnight stay," and "Someone must've left the door unlocked when they left." The school counselor looked at the uniformed officer closest to me and let him know that she is a mandated reporter. He looked at me and told me he had my information, and I was free to go. The other officer was dictating instructions to an invisible person on the other end of the radio waves, with his head turned away from the group. They started dispersing us.

I looked at the little one and wanted to grab her up. I didn't want to leave. I wanted to stay and talk with this momma, wanted to hear her story, wanted to cry, wanted to pray over her and her little girl. I wanted to ask her where she actually lives, ask her if she needed help . . . but the sheriff's deputy was in full command now, and he was sending us on our way.

What does God require of us?

As we drive away, we rehash an old conversation.

We can't take home every lost soul we find. We can't mend every broken heart and meet every desperate cry. We can't minister to all who need a healing balm, but we minister to those God entrusts to us, in what manner and for what season that He supplies the grace and opportunity.

My mind returns to a day more than eight years ago and the wee one I held while the police took her mother away in handcuffs—again. I couldn't be her momma, couldn't take her in as my own, that wasn't my assignment that day. But I still have the opportunity to love on her and pour truth into her life. She no longer lives with her momma, who is long gone now, but her Mi-Mi faithfully carries her to our church.

Through my mind runs face after face of little ones, broken ones, needy ones, all helpless, all in need of rescue . . . but ones that are beyond my capacity to alleviate their suffering. My offering and service is so pitifully small when I look at it in comparison to the enormous need.

Where does my responsibility begin and end?

Jesus provides some insight into this dilemma:

"But in truth, I tell you, there were many widows in Israel in the days of Elijah, when the heavens were shut up three years and six months, and a great famine came over all the land, and Elijah was sent to none of them but only to Zarephath, in the land of Sidon, to a woman who was a widow. And there were many lepers in Israel in the time of the prophet Elisha, and none of them was cleansed, but only Naaman the Syrian." When they heard these things, all in the synagogue were filled with wrath. And they rose up and drove him out of the town and brought him to the brow of the hill on which their town was built, so that they could throw him down the cliff. But passing through their midst, he went away (Luke 4:25–30).

Whenever I want to bring another little one home, take in a troubled teen, or take on the task of finding shelter for all the homeless in our community . . . I remember that even the Savior of the world didn't heal every illness or rescue every child in need.

There were many lepers when God sent the prophet to bring the healing message to one. Only one.

When we drive past the house where we found the chocolate-eyed toddler, it looks completely abandoned now. No cars, no signs of life, and I wonder, Where is that little one? And I pray. I know that God is able to rescue. He knows where she is and I may not be able to do more, but I can pray.

One day God may direct us to become foster parents. Or He may send another battered wife into our lives to care for, as we have in the past. God may challenge us to take in an inmate as she transitions to the free world. He may have a ministry waiting for us that no one else wants.

We've taken in troubled and broken people at different points in our lives, but for this season, He has other things for us to do. And although my heart wants to bring home every chocolate-eyed child and rescue every meth addict . . . that isn't His current assignment for us, and they are not my responsibility today.

What is His assignment for you today?

How do you resolve the struggle of wanting to rescue all who are in need?

This was originally posted on Kimberly’s personal blog as “Chocolate-Eyed Girl.”