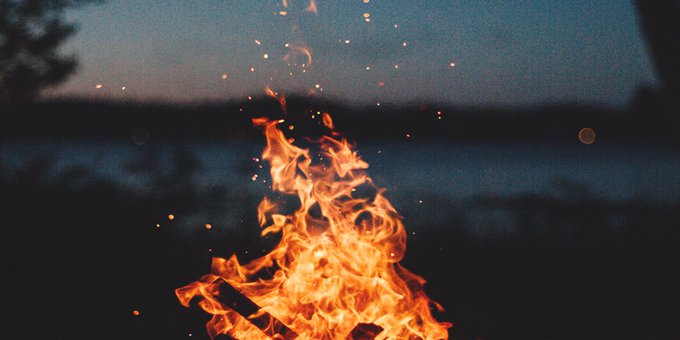 The book of Jude is easy to miss in paging from John’s epistles over to Revelation. A mere twenty-five verses long, this brief letter may seem trivial. However, it contains vital truths for the Church as the earthly brother of Christ compels his readers to contend for the faith. He tells us that “some people, who were designated for this judgment long ago, have come in by stealth; they are ungodly, turning the grace of our God into sensuality and denying Jesus Christ, our only Master and Lord” (v. 4 CSB). False teachers are among us, he says, and we must be on guard!

As he nears the end of his letter, Jude gives some final instructions on how to deal with those within our local churches who are struggling. He tells us to have mercy on doubters and those who are polluted by the flesh. And some, he says, we must “snatch from the fire” (v. 23 CSB).

Who’s in the Fire?

Jude doesn’t mention any specific person or group with this command. He simply says, “Save others, snatching them out of the fire.” This begs the question, then, “Who are these people we’re snatching?”

Think about the last time you were at church. Picture the faces of those who sat down the row or who greeted you as you came in. Think of those who asked after your family as you hung up your coat. That’s who Jude is talking about. I don’t mean to say that everyone in our churches is destined for “the fire”; what I do mean is that it could be any one of us.

Jude expresses his concern over false teachers who have infiltrated the church in “stealth mode.” They don’t have tattoos on their foreheads advertising that they’re about to preach a false gospel. Satan is much too smart for that. Instead, they come in totally unnoticed. They start asking questions, “blaspheming,” Jude says, “anything that they don’t understand” (v. 10). They also reject authority (v. 8). Perhaps this looks like divisive whispers about the pastor or elders or deacons. Or maybe they encourage grumbling and murmuring about the leaders. Finally, these infiltrators “defile the flesh.” This will usually be much more difficult to see—for a while at least. However, a common thread among many false teachers is immorality and sexual perversion.

You may be thinking, There’s no one like that in my church, and I certainly hope that’s true. However, a stroll through the “Christian” section in Barnes & Noble, a quick internet search of trendy celebrity pastors, or even a brief encounter with social media will tell you that access to heretical teaching is more stealth and more prevalent than ever. It doesn’t take much to get taken in: a “suggested for you” YouTube video, an internet post shared by a friend, or a book gifted by a neighbor—and suddenly the enemy’s toe is in the door. Before you know it, your friend is taking that prominent person’s word over the clear teaching of Scripture and following him or her instead of Christ.

Could this have happened to someone in your church?

The ones we’re called to snatch out of the fire are those we know to be our brothers and sisters in Christ. They worship with us, observe the Lord’s Supper with us, celebrate baptism of the saints with us, nod their heads during the preaching with us. They serve in the nursery, hand out bulletins, and make sure the facility is clean. They know the Truth, but they have wandered from it.

How Will I Know?

At this point, you may be wondering how you could ever tell if someone in your church is in this predicament. The answer is simple, but it’s far from easy. If we don’t take time to truly get to know our brothers and sisters, we will be caught completely off guard when they wander away. It’s not enough to know their names and occupations. We need to build redemptive relationships with others in our local bodies. Of course, this won’t happen overnight, and it most likely can’t happen with every person in your church. This takes all of us. However, the enormity of the task cannot scare us away from its completion.

Start small. Consider one or two people in your church whom you would like to get to know better. Perhaps you already have a superficial friendship with them, but you recognize that you need to go deeper. Invite them over for coffee or out for lunch after church. Ask questions and get to know them. How did they get saved? How long have they attended your church? What is their family like? As time goes on and the relationship deepens, the questions will as well. And be ready for the relationship to go both ways. They will be investing in you as well to make sure you don’t stray from the Truth.

The more relationships we build that go beyond the “How’s it going” questions, the fewer who will fall into the fire, and the more poised we’ll be to do some “snatching” of those who do tumble in.

What Are the Stakes?

Jude uses intentionally graphic imagery to communicate the seriousness of this issue. What you think of when you think of “the fire” is exactly correct. He’s speaking of eternal judgment. Another of Jesus’ brothers, James, puts it this way:

My brothers and sisters, if any among you strays from the truth, and someone turns him back, let that person know that whoever turns a sinner from the error of his way will save his soul from death and cover a multitude of sins. (James 5:19–20 CSB, emphasis added)

James says that helping someone from “among you” who has strayed from the truth saves that person’s soul from death.

Likewise, the author of Hebrews makes the stakes clear. Consider these verses from chapter 10:

For if we deliberately go on sinning after receiving the knowledge of the truth, there no longer remains a sacrifice for sins, but a terrifying expectation of judgment and the fury of a fire about to consume the adversaries. . . . How much worse punishment do you think one will deserve who has trampled on the Son of God, who has regarded as profane the blood of the covenant by which he was sanctified, and who has insulted the Spirit of grace? (Heb. 10:26–27, 29 CSB)

James, Jude, and the author of Hebrews are all writing about people within a local body of believers. However, the death, judgment, and fire to which they refer await unbelievers. These men, under the inspiration of the Holy Spirit, teach us that within our churches may be some souls who profess to know Christ, but who will eventually demonstrate by their actions and beliefs that they do not. None of these passages teach that a person can lose their salvation. They teach that those who wander from the faith and never turn back prove that they were never genuinely saved. We’re not called to distinguish who’s a genuine believer and who isn’t. We should assume that those who profess Christ are genuinely His. It’s our task, then, to call them back to that Truth when they wander.

Allowing a brother or sister to wander from the Truth and to fall into sin is, as Jude might say, playing with fire. Yes, the Holy Spirit can use any circumstance He chooses to bring a wanderer to repentance. For Jonah it was a storm and a great big fish. For the prodigal son, it was a famine. But for David, it was a friend. Consider for a moment if Nathan had refused to pursue King David (2 Sam. 11–12). Would David have repented? We’ll never know, but we do know that sometimes God chooses to use His people to rescue a soul that has fallen into the fire.

Are you willing to embark on that rescue mission?