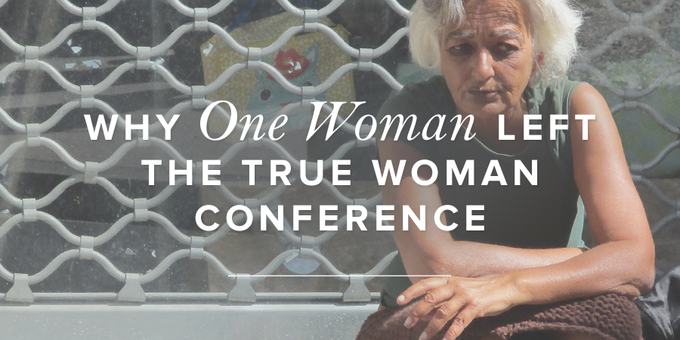 Why One Woman Left the True Woman Conference

After the last True Woman Conference, our team received the following email from an attendee named Patsy. It’s a challenge to all of us—and a good one.

Patsy isn’t the only one who saw the homeless and stopped; we’ve heard from others who stopped and listened, stopped and prayed, stopped and gave—ministering God’s grace to those on the streets of Indianapolis. To each of you, thank you.

May we not be like the fat and sassy women of Amos 4:1 who oppress the poor and crush the needy. Instead, may we be increasingly compelled to reach beyond our comfort zones into the places of brokenness and need that surround us with the hope and love of Christ.

Why Patsy Didn’t Want to Come

I attended your True Women Cry Out! Conference in Indianapolis this past September. Though I must admit, I wasn’t looking forward to going, because I had lost my mother this past summer and had spent enough time crying. I had committed to going with a dear friend from the Dominican Republic, though, so I couldn’t back out.

From the first speaker, Russell Moore, God was tugging on my heartstrings. Two things Dr. Moore said struck a chord within me. The first was:

The problem with the church is we look like everyone else.

And the second was when he was telling the story of Jesus healing the demon-possessed man. Dr. Moore said:

If you are going to be a follower of Christ, then you must be willing to go where Jesus went.

Why Patsy Left the Conference

At that point, after a little discussion with another friend and a prayer, I left your conference. You see, on the way to the conference I was struck by the multitude of homeless people on those downtown streets.

We passed a girl on one corner with a sign saying, “I just want a happy birthday.” We passed other men and women who had varying signs asking for food or money. As we were trying to figure out how to get to the conference, one homeless woman asked if we were trying to find the convention center, and when we said that we were, she gave us directions but asked nothing in return.

We were the church on the streets of Indianapolis, and we looked like everyone else. Many times we don’t help the homeless because we are afraid or we judge that what we are doing does not help them. I knew God was compelling me to GO.

A friend and I went back to find some of the women. We found the girl who gave us directions. Her name is Alisha. We talked with her, prayed with her, asked if she would come to the conference with us. We also asked her how we could help her. She asked us for a tent, as hers had been stolen from her. We told her we would get her a tent and would meet her at 8:30 a.m. at the same corner.

When we got back to the conference that night we asked if we could buy tickets for the conference but were told they were sold out. However, there was a board on which people posted phone numbers if they had unused tickets. A woman named Sarah gave us two tickets. We were still hoping to find the “birthday girl” on our way back to our hotel. (Sadly, we did not locate her.)

We got up early on Friday and bought two tents. We found Alisha exactly where she said she would be with another homeless lady, Rebecca, standing near. They both came to the conference that morning with us and heard Jennifer Smith speak. Talk about God’s timing. What a perfect message for these two young women to hear! We had lunch with them, prayed with them, and listened to their hearts. Alisha came back that night and spent hours in prayer with us.

Alisha is a caretaker for other homeless people. We saw her feed others food that was hers so they wouldn’t be hungry. Rebecca sleeps on the downtown streets under the lights and cameras because she is alone, and it is not safe for her to go to the tent city. We asked them why they don’t go to the shelters, and they said they did—only when they had to keep from freezing to death. They pick up bed bugs and lice there.

I am sure their stories can be told by countless people on the sidewalks in this country. That is why I am writing you. You called us to cry out in prayer for our own sins, for the lost, for our families, for our country, for our world. What if we cried out for each city that you had a conference in? What if we stop for a second of feeding our own spirits and feed the spirits of those hurting that we walked past?

What if—in each city—you had ambassadors who were willing to go out on the streets and pass out blankets to the homeless and give out tickets that would have gone unused? I bet there were 100 tickets listed on that board that were paid for but unused. What if you had people donate in advance to provide brown bag lunches for the homeless, and you passed them out over lunch break?

I know there may be a lot of details to doing these types of things. However, 7,000 women walked by hundreds of homeless. Did you know that Indianapolis has anywhere from 4,500—8,000 homeless people on the streets on any given night?

By the way, the conference ended up being just what I needed. Though I am still grieving my mother’s passing, what a great reminder in my life that we are called to be different.

Obviously, there’s nothing wrong with attending a conference for a couple days, and the challenge isn’t for you to leave the next conference you attend to care for the homeless. But it is a good reminder for everyday life.

As you and I encounter people—homeless or not—do we see them as an inconvenience and an obstacle to get around . . . or as needy individuals made in the image of God and in need of being reconciled to Him through Christ (Matt. 9:36)?

Is there anything you can take away from Patsy’s challenge?

Previous Post Trusting God to Heal the Scars of Sexual Abuse
Next Post Cultivating a Life-Giving Culture Through Mentoring: An Interview with Susan Hunt
Store Donate Now My Account
Stay Informed via Email