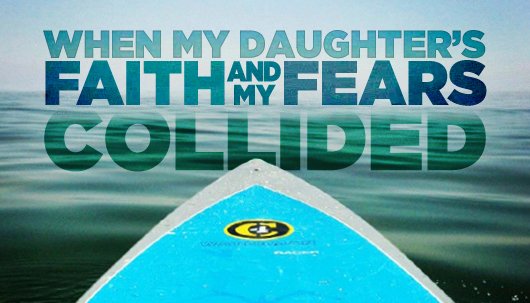 When My Daughter's Faith and My Fears Collided

If you have children, your life is almost certainly just a little crazy. And if your home is anything like mine, it can be an incubator for crazy ideas. We moms are supposed to nurture creativity in the depths of their little souls. We want them to dream big and do great things for God, right? But kids have crazy ideas!

I'm not talking about foolish ideas like when our son and his friends wanted to see how many ping pong balls they could stuff in Drew's mouth. I'm talking about unbelievable, seemingly unattainable ideas. As our kids got older, there were extreme adventure ideas talked about around the table, some of which they've done like climbing Mount Kenya. But most of them, thankfully, went into their mental files titled "crazy ideas we always wanted to do when we were kids . . . but never did."

Are you standing in the way of one of God's crazy ideas for your children? Maybe He wants to grow their faith . . . and yours, too!

So when my daughter Ginny and our neighbors Craig and Trent began talking about a crazy idea, I was certain it would pass, and they would be dreaming about something new tomorrow. But a stand up paddleboard trip across Lake Michigan to raise money for children in Uganda was not going away. In fact, it seemed to be growing.

Even the Coast Guard thought it was cool and gave them pointers on safety. Really? I was counting on them to tell Ginny she couldn't do this! And I was certain that if my husband had been home he would have agreed that this was not a good idea, but he was in Africa on a mission trip!

As the kids began to plan for this adventure, I became full of fear. I had grown up on Lake Michigan and respected the often fierce water. I'd had some of my own frightening moments and knew the reality of many lives lost in the strong currents of our great lake.

But my daughter Ginny, now twenty-one, felt this was a mission God had given them to do. I couldn't argue with that . . . but unfortunately I did. Ginny would point out my fear, challenging me to trust the Lord and live by faith.

I'm not sure exactly when my fear turned to faith. It was a process as I saw God at work. I just could no longer argue when at every turn God was doing something miraculous. He was showing off! Ginny, Craig, and Trent believed God for this crazy idea, and God made their efforts successful.

I would have said before this summer that I lived open handed with God when it came to my children. God showed me otherwise through this adventure. I let fear rule in my heart, clouding my vision and causing conflict with my daughter. I had made this about me, my fears, and my daughter. God reminded me that this was about Him, His plan, and His purposes.

Are you standing in the way of one of God's crazy ideas for your children? Maybe He wants to grow their faith . . . and yours, too!

Catch all the details of this adventure today and tomorrow on Revive Our Hearts.