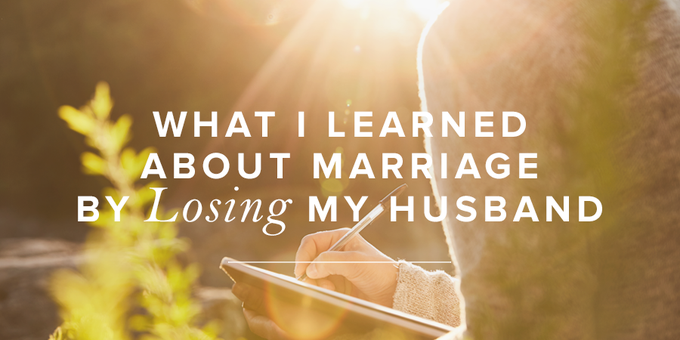 What I Learned About Marriage by Losing My Husband

Yesterday someone pointed to the sky. “It’s beautiful,” she said. I peered out the window to see a watercolor display of grays and blues. I find myself looking heavenward more often. “Away from the body and at home with the Lord” (2 Cor. 5:8). Where is that exactly? I’ve noticed a lot of things I took for granted when you were alive.

I suppose we all would lament the things we took for granted when a loved one dies. Pity we can’t see them before the funeral. As I look back at that great sky, I’m grateful God has given me a way to say in faith, “Where O death, is your victory? Where O death is your sting?”

Disclaimer: We pray only to the Lord. Our time to speak to our loved ones is when they are in the flesh. That’s part of why I wrote this article—to remind us all to do so. A letter to my husband is a writing style only and not an affirmation that we can speak directly to our loved ones after they have died. I hope some of this will resonate with and encourage you in your marriage.