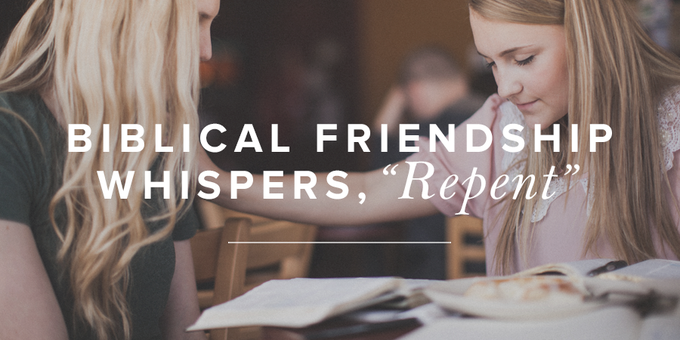 As a child, I had many friends. Good friends, even. But a best friend? That I lacked, and to be honest, it was a bone of contention to my pre-adolescent heart.

I tried some of my closest buddies on for size. Would she be the one? Would she be my “Anne-with-an-E,” my “kindred spirit”? Would we roam the fields as if in Avonlea, sharing secrets and stories and dreams?

Although I had wonderful friends for whom I’m grateful, my giant, girly friendship dreams never quite came to fruition. We shared memories, secrets, and crushes. Once, I even received the middle portion of a three-way best friend necklace. (What??? I know.) But something was missing. I wanted a true, intimate friend. A friend for the ages.

To my amazement, this first sort of friend came in the form of a guy—the guy who is now my husband. In him I found a godly friend, one with whom I could share a mutual love of Christ, as well as my whole heart. We married when I was just eighteen, and for two decades now, he’s been God’s gift to my lonesome heart. I thought I had found my one, deep, lasting friendship. And that was enough for me. But God had other plans . . .

One of the great surprises of past two years has been the Lord’s work in my life through the development of real, vulnerable, transparent friendships with other women. Together, we are learning what it means to be true friends, not as defined by our culture (though, don’t get me wrong, we do our fair share of Starbucks, shopping, and nonsensical yacking), but as defined by the Word of God.

That Word tells us that biblical friendship:

And finally, the greatest of these? The one that has revolutionized my idea of Christian friendship and brought depth beyond expectation in my relationships with other women?

In her book Messy, Beautiful Friendship, Christine Hoover carves out a course for pursuing biblical friendship. In the chapter titled “Faithful Wounds: Speak the Truth in Love,” Hoover says:

Biblical confrontation is rooted in a deep love for our friends. Proverbs characterizes it, in fact, as a faithful wound. . . . Tim Keller describes a faithful wound as a purposeful and exact cut: “like a surgeon, true friends cut you in order to heal you.”

Hoover continues in saying that the wound of a true friend is:

Recently, I’ve been on both sides of a faithful wounding. While each has its challenges, I found myself unexpectedly undone at the idea of having to be the one to inflict such a wound. However, I saw a broad issue in my friend’s life. In God’s providence, I became aware of a specific instance where that issue was brought into the light. I knew I should use the opportunity to discuss this with her. Knowing and doing, however, are very different things.

I hemmed. I hawed. I nauseated. (Fine. I was nauseated.) I wanted to do anything but draw this infection out of my friend. I love her. I didn’t want to hurt her. And though the incident was relatively minor, I knew she would be grieved by what needed to be said. But I picked up my tools as tenderly as I could and made a careful incision.

Though the conversation was difficult for both of us, she responded with humble repentance. I’d venture to say it brought us closer together, almost as if I’d been allowed to be present to witness the sweet moment of the Father’s embrace as she turned from herself and ran to His arms.

So not only can a biblical friendship survive a faithful wounding, it can even be strengthened by it. One thing I should mention, though: The wounding must be reciprocal when necessary.

Just last night, in fact, my dear friend shot a sin-fighting arrow right in my direction.

She’s not only my friend, but my counselor and my teacher—she leads our monthly “Girls’ Night” Bible study. Presently, we’re working through 1 Peter, and just hours before, I had casually apologized to her for some comments I’d made the night before which, in retrospect, I realized were a little too obnoxious, even for me.

Though she responded graciously, that sense of conviction was still on my mind as we set forth on a discussion of 1 Peter 1:13–2:3, which includes these words:

Therefore, preparing your minds for action, and being sober-minded, set your hope fully on the grace that will be brought to you at the revelation of Jesus Christ. As obedient children, do not be conformed to the passions of your former ignorance, but as he who called you is holy, you also be holy in all your conduct, since it is written, “You shall be holy, for I am holy” (1:13–16, emphasis added).

This was exactly the opposite of how I’d behaved the night before. And to make matters worse, during our study, I’d been attempting to read a passage aloud and stumbled over some phrasing, which, apparently set me right back to middle school. I succumbed to a fit of giggles (“passions of former ignorance,” anyone?) and could not recover for roughly ten minutes.

In the meantime, my teacher-friend expounded the passage passionately, yet delicately, as she navigated all of the areas in which I needed rebuke. While my heart burned with shame, she shared from God’s Word with authority and with meekness. She had no idea that the lesson she had prepared diligently over the course of four weeks would be an instrument of spiritual surgery, but the Lord knew that I would need exactly those wounds last night. And He knew that she, my faithful friend, would be just the right person to whisper in my ear, “Repent, silly woman. Repent.”

After the exhortation, after the wounds, after the repentance and repair, what are friends to do? How, then, shall we live? Jesus gives us a practical example in Matthew 11 as He’s just finished instructing His disciples and is setting out to teach and preach in their cities. He does the work of exhortation, and when it seems that the cities did not respond to miracles, nor to the whisper of “Repent,” He continues with a shout:

The perfect surgeon inflicts the perfect wound with stunning force and accuracy and then makes a surprising turn—urging His listeners toward thankfulness and rest.

At that time Jesus declared, “I thank you, Father, Lord of heaven and earth, that you have hidden these things from the wise and understanding and revealed them to little children; yes, Father, for such was your gracious will. All things have been handed over to me by my Father, and no one knows the Son except the Father, and no one knows the Father except the Son and anyone to whom the Son chooses to reveal him. Come to me, all who labor and are heavy laden, and I will give you rest. Take my yoke upon you, and learn from me, for I am gentle and lowly in heart, and you will find rest for your souls. For my yoke is easy, and my burden is light” (vv. 25–30).

How do we go on when the rebuke and the repentance are done? We are to thank the Father, as did the Son, for placing friends in our lives who love us enough to lead us to the operating table, make careful, clean incisions, and then help us through the process of healing. And then we rest—in each other’s care and in His love. We cease from our labors knowing that His yoke is easy, His burden is light, and that just when we need them, our friends will be there with a faithful whisper.

Step into the Messiness of Vulnerable Friendships