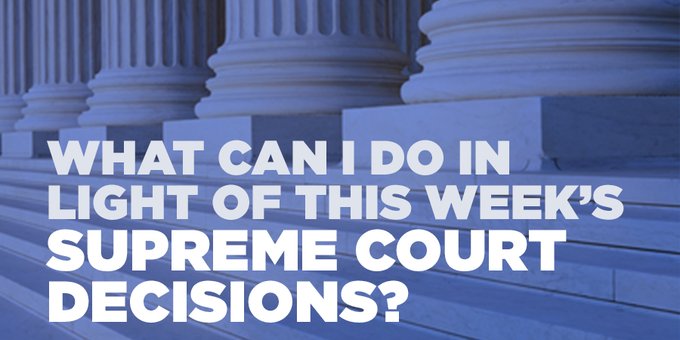 What Can I Do in Light of This Week's Supreme Court Decisions?

This week’s Supreme Court decisions on DOMA and Prop 8 are much on my heart, as I’m sure they are on yours. A few days ago, I stumbled across a message I gave in 1999 at an annual Michigan Prayer Breakfast. I was struck by how timely this message—given in the wake of the Columbine school shooting—is today, fourteen years later.

In light of these recent decisions by the highest court in the land many of us want to know: “Is there anything I can do about it—anything that will really make a difference?” This message—from the book of Nehemiah—gives us a starting point. You can read the entire speech here, but here’s a taste:

Our founding fathers recognized that America’s greatest defense lay in the spiritual and moral strength of her people, in the stability of her homes and communities and churches, and in the willingness of her citizens to be self-governed under God.

During our lifetime, in the name of pluralism, tolerance, and political correctness, we have witnessed the systematic dismantling of the spiritual walls and gates that form our nation’s most strategic defense system. I’d like to call your attention to three of our nation’s most vital gates that have been plundered:

The first gate that is in ruins is our view of God.
Today we worship a god of our own making—a cosmic genie who exists to fulfill our wishes, whose supreme job is to make us comfortable and happy, and whose laws are subject to the changing whims of each generation.

How different is this image from the true God who has revealed Himself in the Scripture—a holy God, a God of absolute truth, a God who extends mercy and grace to those who humble themselves and accept His means of salvation, but a God of judgment who will one day pour out wrath on unrepentant sinners.

The second gate that has been torn down is our view of morality.
There was a day when you didn’t have to risk your reputation or your job in order to identify immoral behavior as immoral. Right was right; wrong was wrong. Our laws were predicated on the absolute, unchanging moral law of God. And we didn’t have to apologize for saying so. But all that has changed in a world where the notion of absolutes is rejected and relativism reigns.

The steady erosion of morality has left us vulnerable and defenseless against a host of attackers, among them, sexually transmitted diseases, chronic mental and emotional disorders, and senseless violence.

A third gate that is in shambles is our view of the family.
Such essential virtues as honor, duty, loyalty, obedience, sacrifice, and chastity have gone by the wayside. In their place, we have substituted indulgence, greed, personal convenience and comfort, and self-gratification.

A society that abandons God and His laws, that rejects moral absolutes, and that is willing to sacrifice its families on the altar of convenience, careers, and self, is a society whose gates are broken down.

The fact that our walls and gates are in ruins is no surprise to most of us. What we want to know is: “Is there anything we can do about it—anything that will really make a difference?” In the story of Nehemiah we discover an inspired example of how to respond to broken down walls and gates:

The battle we are fighting today is not a physical one, but a spiritual one. We are witnessing the clash between two kingdoms—the kingdom of God and the kingdom of Satan. It is a battle for the hearts and souls of men. Our only hope lies in God. That is why prayer is so vital.

God’s Word promises that if those of us who are His people will humble ourselves and pray and seek His face and turn from our wicked ways, He will hear from heaven and will forgive our sin and will heal our land (2 Chron. 7:14).

Won’t you join me in a prayer earnestly confessing our sins and asking God to have mercy on our land?

Previous Post You're Not Who You Once Were . . .
Next Post Bosses Don't Give Gold Stars--and Other Career Advice